PHOTO COURTESY OF JOSEPH CLIMEK AND MELODY KING "Mos Iceley," the backyard rink of Joseph Climek and Melody King in Webster.
There is a fraternity of families around Rochester who tend patches of natural ice in their yards for their children to live out their dreams.

For the last 10 years, Scott Vadney has been a member, painstakingly building a rink in his backyard in Perinton each winter. He erects boards fashioned out of 2-by-10 pieces of lumber. He lays down a plastic liner inside the perimeter, then floods the basin with a garden hose like he’s filling a bathtub.

When it freezes, he shovels the surface after each snowfall. When a leaf lands on the ice, he hustles to brush it off. They create pockmarks, you know.

There was a time when a rink like his would have stayed solid enough for skating for much of December through early March. But as the new year neared, Vadney had a tub of slush.

WXXI: ROCHESTER'S VANISHING BACKYARD RINKS
Update Required To play the media you will need to either update your browser to a recent version or update your Flash plugin.

“When it works, it’s wonderful, it’s magical,” said Vadney, a 52-year-old father of three. “But it’s frustrating because I can’t count on when it’s going to work. . . . It’s been good more often than not, but recently, anecdotally, it’s not staying as sustained cold.”

Science backs up his observations and those of countless other Rochester backyard rink rats. 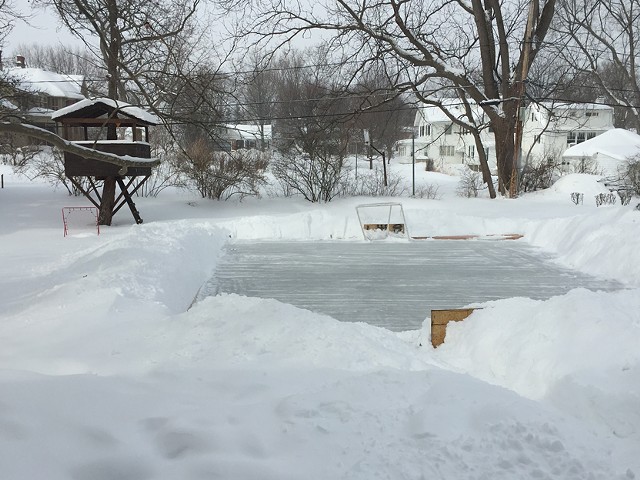 Researchers in Canada recently reconstructed the viability of outdoor skating seasons over eight decades, and the takeaway was clear: milder winters are cutting into the number of days cold enough to maintain a homemade rink.

The researchers extracted mean daily winter temperatures from the National Weather Service and Environment Canada in each of the so-called “Original Six” National Hockey League cities — Boston, Chicago, Detroit, Montreal, New York, and Toronto — from 1942 onward and found a steady decline in the number of days when the weather was cold enough to make ice and sustain it for skating.

Toronto, the closest of those cities to Rochester, saw the sharpest drop in skating days, defined as those where the temperature averaged 22 degrees Fahrenheit once a suitable ice surface had been established.

In the winter of 1942-43, the start of the Original Six era, there were 55 skating days in Toronto. Last year, there were 20, according to the study.

Applying the same criteria to Rochester, which is snowier and warmer than Toronto, there were 34 skating days at the outset of the study and 10 last year, according to the National Weather Service. Over the last decade, Rochester averaged 27 skating days a year, buoyed by huge spikes in 2014 and 2015, compared with 33 throughout the 1940s. 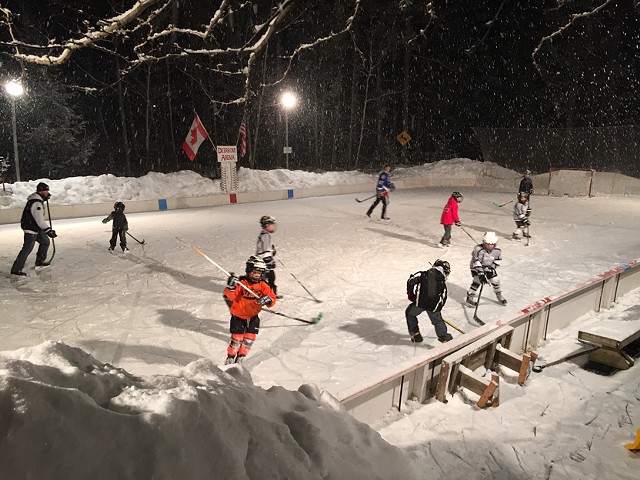 “That period in winter when it gets cold enough to build a backyard rink is falling later and later in the calendar year,” said Robert McLeman, an environmental scientist at Wilfrid Laurier University in Waterloo, Ontario, and one of the authors of the study. “On average, it occurs somewhere between Christmas and New Year’s. But in many years, it’s occurring sometime in January and spring is coming earlier.”

The study, published in The Canadian Geographer in July, also found greater swings in temperature from year to year. Rising global temperatures don’t mean an end to cold winters, but they do mean erratic freezing weather, which makes maintaining natural ice challenging.

“Back in the ‘50s and ‘60s, winters were just cold and you could count on them getting cold sort of mid-December and staying cold well into March in the Great Lakes region,” McLeman said. “We don’t see that consistency anymore. It’s much more variable, like a yo-yo.”

Vadney has experienced the trend firsthand.

The fluctuations are what keep Anthony Carter from investing in a backyard rink. The 35-year-old father of three and beer-league hockey goalie set aside money to build one when he and his family moved into their Henrietta home two years ago. He has yet to pull the trigger.

“The more we looked at weather patterns and almanacs and past dates, we were like, there really aren’t that many days of winter,” Carter said. “Rochester is cold, and some people would say miserable, but it wasn’t acceptable to having a rink.”

RELATED: HOW TO BUILD YOUR OWN BACKYARD RINK ON THE CHEAP

For eight years, the authors of the study have been collecting data from outdoor rink owners for their website RinkWatch, which monitors winter weather conditions and the long-term impacts of climate change through the lens of the backyard rink mystique.

Joseph Climek and Melody King of Webster, who have two baby girls, are volunteer contributors. Fans of “Star Wars,” they named their 40-by-60-foot rink “Mos Iceley” after the Tattooine spaceport Mos Eisley, and their hockey team “The Tusken Raiders.”

The couple was admittedly spoiled by their first rink-making experience during the consistently frigid winters of 2014 and 2015. Since then, their data show, the days conducive to skating have been outnumbered by the unfavorable ones.

They had 21 “skating days,” as defined by RinkWatch, in one year and 17 in another. One year they had none because they dismantled their rink after waiting through January for weather consistently cold enough to freeze water solid.

“It’s not something I want to lose out on,” said Climek, 35. “But I know plenty of guys who play hockey with me every week who thought about doing a rink or used to and who have thought to themselves, the winters are getting milder, and is it really worth it?”

Yet Climek and King persevere, like all families in the fraternity. They universally describe the experience of skating on and maintaining their own rink as transcendental.

“There’s so much work put into it before you can actually enjoy it,” Climek said. “Then, once you can finally get that first skate in, you just completely forget that you had to do so much work. It’s amazing.”

In his book, “Home Ice: Reflections on Backyard Rinks and Frozen Ponds,” the late noted hockey writer Jack Falla wrote of resurfacing a backyard rink as being “as easy and pleasant a job as I know.” 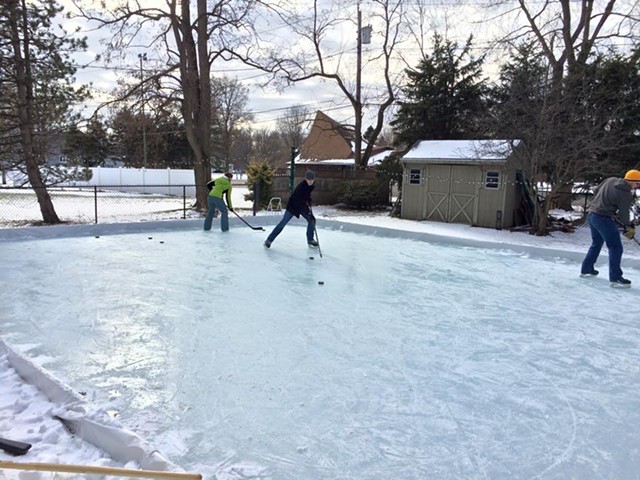 “I say I do it for the kids, but honestly, there are times when I’m doing it for me,” he confessed.

“There are times when its 11 o’clock at night, it’s still, it’s cold but there’s no wind, it’s quiet, the sky is full of stars and I’m out there with a homemade Zamboni watering and smoothing out the rink trying to get it as perfect as possible,” Vadney said. “It’s almost a Zen garden for me.”