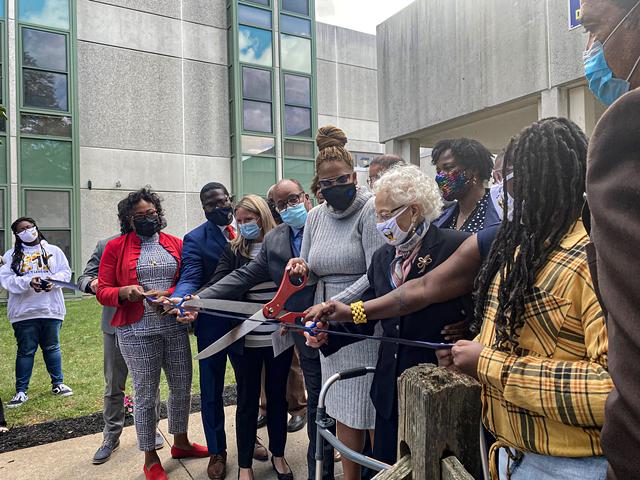 On her 98th birthday, Alice Holloway Young stood in front of the Rochester school where she taught decades ago.

She recalled a moment in her childhood when she and her brother would cross state lines from Virginia to North Carolina to attend a school for Black children.

“Can you imagine moving across the line to go to a school, and 94 years later I would be here?” Young said as she fought back tears.

Dozens of city and school leaders surrounded her Wednesday outside the Adams Street school to commemorate its renaming from the Nathaniel Rochester Middle School to the Dr. Alice Holloway Young School of Excellence.

The renaming came after a petition circulated earlier this year to remove Rochester’s name due to his enslavement of Black people in the 1800s. 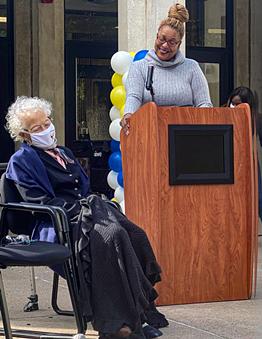 “Your name replaces a history of inequity and inequality in our community,” said Dr. Leslie Myers-Small, Rochester City School District superintendent. “Your name becomes the pride of our district, as we work to provide each scholar with a high-quality education.”

Young was the district’s first Black vice principal and principal, and she supervised the first Urban-Suburban program, which still exists today. Young was also a founding trustee of Monroe Community College, where she served as its Chair for 20 years.

Mayor Lovely Warren presented Young with a symbolic key to the city and shared a message with the young students at the ceremony.

“When you grace these halls, never forget whose shoulders you stand on,” Warren said. “She paved the way and she fought so that you will have no excuses. You can become anything that you want to become.”

Racquel Stephen is a reporter for WXXI News, a media partner of CITY.