All art tells a story — music, dance, visual arts — even if on the surface it appears abstract and purely aesthetic. When language is the medium at play, consciousness is transferred, characters and places are imagined, and ideas are realized. We read for entertainment, escapism, and enlightenment, and reading fiction in particular has been shown to instill empathy in avid readers. For this reason, diversity in literature is important. But when certain authors are left to the margins, the genre as a whole suffers. Readers should be exploring world literature by women writers, but for that to happen, those writers have to get published in the first place.

August was Women in Translation month, and to keep the momentum going we're taking a closer look at international women writers and the Rochester-based translators and publishers who make their work accessible to an English-reading audience.

The Rochester-based non-profit literary press Open Letter Books solely publishes literature in translation, and has been placing more of an emphasis on women authors in particular. Open Letter Publisher Chad Post has dedicated years of work to making women's voices more accessible. And between managing the Three Percent blog, founding the Translation Database, and the translation studies courses he teaches at the University of Rochester, he actively promotes women in translation.

Post titled his blog Three Percent in reference to the statistic that only three percent of the literature Americans read is translated from another language. But even among international writers, there is a disparity in the number of women who are published in translation.

For 11 years Post has been compiling information for the public Translation Database, keeping track of published translations in the US, and in August 2018, he wrote that in the last ten years, 28.97 percent of books were by women, 68.50 percent by men. Open Letter has published women authors from over fifteen countries. The press was awarded an NEA grant in January to fund six women writers and that means they will publish more women authors than men this year.

As part of its Danish Women Writers Series, Open Letter brought multi-gendered author Madame Nielsen to Rochester in March of 2018, and she performed songs and gave a reading at literary-focused Rochester bar The Spirit Room. In addition to promoting women's voices, Madame Nielsen's bold and tragic novella, "The Endless Summer," is also in part an exploration of sexual identity. The first few lines of the book read: "The young boy, who is perhaps a girl, but does not know it yet. The young boy, who is perhaps a girl, but will never touch a man...The young boy, this fetching young boy with delicate features, the big eyes, and the huge anxiety for war and illness, for body, sex, and death."

"The Endless Summer," which was published by Open Letter Books in 2018 and translated from the Danish by Gaye Kynoch, is one of the few opportunities readers have to enter the consciousness of a child whose gender is ambiguous and whose identity is even further obscured by language.


A lot of the literature in translation that Americans read was written by dead white men. The names of these literary giants are inscribed on our libraries and universities. Sophocles, Homer, Virgil, Chaucer, Milton, and Cervantes have reached audiences of myriad languages. What we call the "human" condition has been predominantly defined by male writers. But the Anglo or European cis male narrative has monopolized readers' consciousness for centuries.

Reading contemporary women authors in translation gives us a perspective that diverges from the both European and male-dominated canon. What if, instead of reading from the perspective of the Homeric hero, who often captures, enslaves, and rapes the maiden, we had read the captive maiden's story? For every page written by tragedians like Euripides — who describes the wife as a thing for housekeeping — a woman's voice was silenced on the gender violence of that era.

Even when women are the central characters in male-authored literature, the woman's experience can hardly be conveyed by the author — and consequently, hardly experienced by the reader. In Tolstoy's "Anna Karenina" for example, a man's infidelity is all but celebrated, while Anna's affair prompts more than accusations of scandal — her person is reduced to insanity and even demonic possession before she kills herself.

Examples of the portrait of the woman exploitatively painted by the male author are endless. Today, activists use the expression "pass the mic" to encourage testimony that comes directly from the person being marginalized. Charlotte Perkins Gilman's "The Yellow Wallpaper" initiated nuanced conversation in the late nineteenth century on the general attitude toward the stereotyped madwoman, not only because the work was viscerally unnerving, but because it was a rare glimpse into the interiority of women's emotional imprisonment.

Reading contemporary literature in translation by women normalizes gendered experiences in the same way. "The Passion According to G.H.," written by Brazilian author Clarice Lispector, gives the first person account of a woman who has an existential crisis after killing a cockroach. And whether or not the narrator's crisis has any relation to her gender, it serves as proof that a woman has the intellectual capacity to create a soul as tormented and disturbing as the characters in Edgar Allan Poe's works.

Reading these international stories in the English would not be possible without the art of translation, and many of Rochester's literary translators are focusing more on women authors.

In addition to being an associate professor in English at SUNY Geneseo and having published three poetry collections, Lytton Smith also translates from the Icelandic. Smith says that Iceland is the land of fire and ice — of extremes — and the language is one of the oldest in the world that has been continuously written in literature. 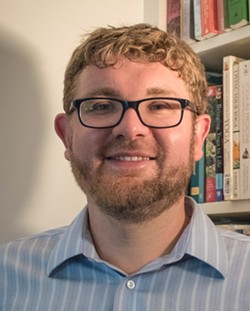 "The country is isolated but a middle-ground, both geographically and geologically," he says, as it is divided by the North American Plate and the Eurasian Plate. He adds that Iceland is remarkably progressive and one of the most feminist countries in the world. It has one of the highest rates of single-motherhood because single mothers are supported financially and socially — it's a choice women can make. "And in the 70's the women handed children to the men-folk, refusing to cook and clean in protest of the wage gap," he says. (At that time, women earned less than 60 percent of what men earned.)

Smith says that translating women is listening to women's voices. When it comes to literature, he says that Iceland is a place where women's voices have always mattered: "In their sagas, when a female character speaks, everyone shuts up and listens. Even now, the most meaningful characters are often mothers and daughters," and reading them from a woman's perspective is important.

In August of 2018 Smith received a grant from the National Endowment of the Arts to translate "Blot" by Sígrun Pálsdóttir. He is also currently writing a collection of poems titled "The After," which focuses on recent, global protest movements.

The only Latvian work of literature that has been published in the United States in English was translated by Kaija Straumanis: her translation of Inga Ābele's "High Tide" was published in 2013 by Open Letter Books and won the 2015 AATSEEL Book Award for Best Translation. 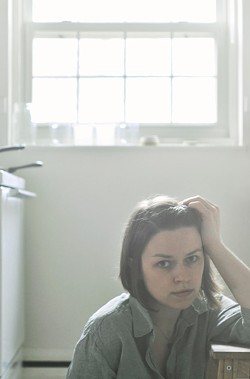 "There are plenty of male authors in Latvia whose works I admire," she says. "But the number of female authors whose works really resonate with me is much higher. There's something undeniably different about the undertones of how these women are writing, something that's kind of earthy, grounded, richly real, in a way that is 'Mother Earth-y' without the overbearing cliché part. It's a connection, a literary one, that I as a reader experience that reaches beyond Latvia. The narratives and the feeling I'm left with after reading these female authors is like someone struck a tuning fork right by my ear and I can hear and feel the resonating hum for days and weeks after."

Straumanis says that the setting of Latvian literature often takes place in the Soviet or post-Soviet era. "I wish that the works were appreciated for the merit itself," she says. "The country hasn't been independent for that long. 'High Tide' is one of the first books that was like that — it didn't blind you with mention of post-Soviet time, even though it makes you aware that pre-1991 is Soviet."

Straumanis is the Editorial Director of Open Letter books and is currently translating "Forest Daughters," a collection of 12 stories from 12 Latvian women. She is also translating the novel "Glass Shards" by Inga Gaile.

Sevinç Turkkan, adjunct instructor at the University of Rochester, sees translation as a form of activism. When she translated the Turkish human rights activist and writer Aslı Erdoğan's a book of three short stories, "The Stone Building and Other Places," it was an effort to bring awareness to Erdoğan's imprisonment in Turkey. Following the subjugation of the military coup in 2016, Turkkan says Erdoğan was falsely accused of sheltering terrorists and writing propaganda in the pro-Kurdish, daily paper Ozgür Güdem. 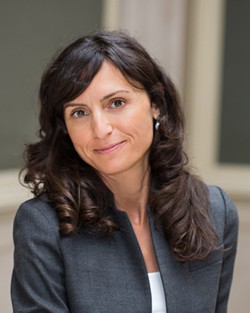 Turkkan's translation is the only English translation of "The Stone Building." After nominating Erdoğan for the European Cultural Foundation's Princess Margaret Award, which Erdoğan won, Turkkan attended the ceremony on behalf of the author who could not attend because of a hold on her passport. Asli Erdoğan is the recipient of many awards, including the Simone de Beauvoir Prize for Women's Freedom and was named in the New York Times's 2017 "11 Powerful Women We Met Around the World."

Turkkan says that Turkish literature is relevant to the American reader now more than ever because "both countries have bullies for presidents" and who are enemies of the press. "What is a stone building?" she asks, "it is a place of confinement, of walls and borders." She adds: "You see Proust, Kafka, Dostoevsky, Thomas Mann, Calvino, Murakami, Pamuk, are all available in translation. Women are rarely translated. Women are even less known in their own languages than men. By translating their work, you are helping the women authors gain more prominence."

Sevinç Turkkan is currently working on another translation, of Erdoğan's "The City of Crimson Cloak." And she is teaching a course on resistance literature this fall semester at the University of Rochester.


If you missed previous events featuring international women authors (like Open Letter's Madame Nielsen performance), there are more opportunities to celebrate women in translation this fall.

On Sunday, September 23, Open Letter Books will be having its 10th Anniversary Gala, hosting Croatian author Dubravka Ugresic, at Nox Cocktail Lounge (302 North Goodman Street) from 5 to 7 p.m. Tickets include free food and a presentation by Ugresic, and a copy of Ugresic's "American Fictionary." The event will also feature raffles for a number of goods donated by local and national supporters, and literary-themed cocktails. $25-$50. openletterbooks.org.

Celebrated Polish author Olga Tokarczuk will on Friday, September 28, take part in "Flights, Memory, Emigration: Polish Writing Now," a panel discussion hosted by Open Letter Books and Skalny Center for Polish and Central European Studies, in the Sloan Auditorium at the University of Rochester (Goergen Hall, 275 Hutchinson Road). The discussion will be followed by a reception and a book signing. 7:30-9:30 p.m. Free. openletterbooks.org; events.rochester.edu.

For more upcoming literature in translation events, check our online calendar at rochestercitynewspaper.com.