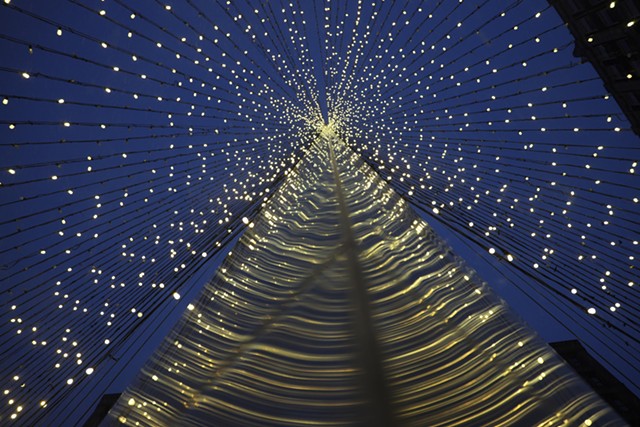 When I was a kid, I lost a glove on the McCurdy's department store escalator downtown. I was maybe 9, and my mom was angry. We were late for our bus and I wouldn’t stop talking.

We made it — barely. As the bus pulled away from East Main and Franklin streets, I looked up at this giant pole, and wondered: What is that thing?

Turns out, the concept for Rochester's Liberty Pole began thousands of years ago.

The idea draws on concepts from the Roman Empire, including a liberty cap, according to University of Rochester classics professor Cameron Hawkins. The cap, said Hawkins, had a deeper meaning in the ancient world.

“There was a soft felt cap known as a pilleus,” said Hawkins. “Former slaves that had been set free would wear that felt cap, so the big moment would be at the funeral of their former master.”

Hawkins said the cap was minted on coins to commemorate one of the biggest moments in the empire’s history: the assassination of Julius Caesar in 44 BC.

A Greek author named Appian described what Caesar's assassins did next.

“They went up to the capital in Rome,” said Hawkins. “They were carrying a spear that someone stuck one of those caps on to symbolize that they just killed a tyrant and had just restored freedom to the Roman people.”

Over the centuries, artifacts and ideas from that era endured. They were reinterpreted for new generations as liberty poles, which became places to gather, celebrate or protest in Europe and the New World. Many were found in towns in the northeastern United States.

Rochester got its first Liberty Pole in 1846. It was built quite close to where it stands today. City Historian Christine Ridarsky said it didn’t last long.

“Unfortunately, it was wood,” said Ridarsky. “It was weakened by the elements, so it was chopped down 13 years later.”

A new one was soon built and it became a focal point for the city's Civil War effort. Ridarksy said. It lasted about three decades. In the end, wind toppled it a few days after Christmas in 1889.

It took the city 70 years to replace it.

“When that second one came down, it was during that 70 years that we put buildings on that historic site, and allowed them to decay over the years, before we had our current Liberty Pole,” said Ridarsky.

The 190-foot-tall stainless steel pole that we know today was designed and built in the 1960s as part of an urban renewal project. The city held a contest and hired an architect by the name of James Johnson. Johnson also designed many buildings in the area, including the Mushroom House in Perinton, Temple Sinai in Penfield, the Phillis Wheatley Library on Dr. Samuel McCree Way and the AME Zion Church on Clarissa Street.

Ridarsky said Johnson’s design for the Liberty Pole was sunken and included a fountain. She added that the monument had gas lines and was expected to shoot out flames in the winter.

It didn’t quite work out. Trash accumulated around the monument, so they built a platform around it. Ridarsky said it had mixed reviews.

“There were some people who thought that that place could have been better utilized,” said Ridarsky. “There was a feeling that there was more need for more park space, open space, green space, downtown and some people thought it was just downright ugly.”

Despite all that, Ridarsky said it became more than just a pole over the years.

“A lot of people remember the Liberty Pole, either from being downtown waiting for a bus, and seeing this structure there,” said Ridarsky. “Or from attending holiday celebrations around the Liberty Pole.”

Holiday celebrations started in the 1970s, with Liberty Pole lightings, and kids visiting Santa at the nearby Midtown Plaza. They were funded by a group of downtown merchants who advertised the pole as "the world’s largest Christmas tree."

Eventually, downtown began to change, and the lightings stopped — but natives like Bob Duffy remembered.

“We would take the 10 Dewey bus downtown and get off,” said Duffy. “It was like a winter wonderland. As a small child, it was great.”

When Duffy became mayor of Rochester in 2006, he said he was determined to bring back the tradition. In 2007, he did.

“We have to build traditions that are embraced by everyone,” Duffy continued. “It’s a part of our culture. And we have so many cultures in our community and we should celebrate their traditions with them. So I think the more gathering places, the more open spaces there are, the better.”

The administrations that followed have kept the tradition alive. The Warren administration expanded the celebrations, linking the lighting ceremony to Roc Holiday Village, an enclosed holiday-themed structure built near Martin Luther King Jr. Park. Amid the coronavirus pandemic, there was no ceremony in 2020.

The city's manager of special events, Kara Osopovich, expects that the events will be revived next year. She said she’s watched the Liberty Pole’s role in Rochester’s civic life grow during her 10 years with the city. The city decided five years ago to keep it lit year-round.

People are gathering at the Liberty Pole in downtown Rochester to celebrate the Biden-Harris victory. pic.twitter.com/YcoExgBUXN


Rochester’s Liberty Pole is more than just a holiday destination. It's a gathering place for triumph and protest in good times and bad. Most recently, dozens flocked there to dance and celebrate when Joe Biden was named president-elect in November.

“It became this truly unique placemaking experiment to have it lit,” said Osopovich. “The Liberty Pole has become a year-round place of interest, really a heartbeat of our community.”

James Brown is a reporter at WXXI.