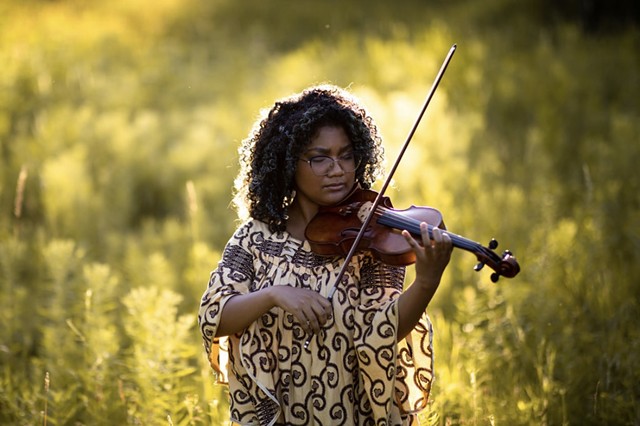 [ UPDATED AND REVISED ] Violinist Epongue Ekille has been advocating for greater recognition of Black musicians’ contributions to classical music, as composers and as performers. She’s from Rochester, and she’s entering her senior year at Yale University, majoring in Environmental Studies.

She has found that the first step is getting other musicians to realize that there are issues to be addressed. “They don’t realize that something is missing, a lot of times,” she says. “There are only four Black people in the Yale Symphony, and I’m the only Black woman. And I don’t think any of my non-Black colleagues realized this until I pointed it out to them.”

These kinds of conversations came to the fore at Yale in 2018, when there was a controversy over music the orchestra played — a plantation song from British composer Fredrick Delius’s “Florida Suite,” based on his time working on a family-owned orange grove with formerly enslaved people and their descendants.

Rochester violinist advocates for Black classical musicians
CREDIT MONA SEGHATOLESLAMI / WXXI NEWS
Update Required To play the media you will need to either update your browser to a recent version or update your Flash plugin.

Ekille was vocal during that conversation, and later decided to create a Spotify playlist called “Black Classical Music Essentials.”

That playlist of recordings by Black classical composers and performers mostly languished afterwards, as everyone got busy with school and moved on with other concerns. After the deaths of George Floyd and Breonna Taylor, the Black Lives Matter movement regained momentum, including in the world of classical music.

Then she says, she went back to the playlist and thought, “Okay, this is a little sparse, let me just add a little more. And a little more ended up being around 12 hours of music. You can’t say that it’s hard to find this kind of music when it’s not — especially orchestral music.”


Some highlights from those 12 hours include: music by Michael Abels, including a selection from his score for Jordan Peele’s film “Us”; a sonata by pianist-composer Stewart Goodyear; music by iconoclastic composer Julius Eastman; and a choral piece by Yale alumnus, Joel Thompson, called “The Seven Last Words of the Unarmed.” The latter piece was sung by the Morehouse College Glee Club in Rochester in March 2019. Epongue played violin on that performance.

Prior to her performance of the work, Ekille had simply known Thompson as a composer she’d occasionally talk to on campus. “Knowing that it was Joel who composed this piece, I immediately just started to do my research and look up videos of past performances,” Ekille says. “And just hearing this huge group of Black men, singing these powerful words ‘I can’t breathe,’ was — there are no words to describe it.”

Ekille’s music started with her father, who she says comes from a very musical family in Cameroon and didn’t have any formal musical training. He was a choirmaster when he was in school, and the rest of his family plays an instrument or sings. “When he came to the United States, he wanted his children to take formal lessons, so he was the one who started me on violin,” she says. “I was too young to choose an instrument. I started, and I haven’t stopped ever since.”

Recently, she also found herself looking to one of the musical institutions that she grew up listening to: the Rochester Philharmonic Orchestra, and challenging them online. “I love the RPO, but I did look back on past Philharmonics series — not Pops, just Philharmonics. And at least from what I saw, there was not a Black composer featured in that series for at least five years, which is a little jarring to me, because the RPO has emphasized playing new music, playing different music.”

Ekille was somewhat disheartened, but is optimistic that Rochester’s classical music community will make progress in its representation of Black music. She has recently joined the advisory board of local chamber ensemble fivebyfive.

“Art and music are avenues that make people tap into emotions that usually don’t come out in a person,” she says, so it’s important to have these conversations. “To leave that for a later date, I don’t think would be wise, especially for Black people, who want to find comfort in the music they’re hearing - not questioning why the radio is only playing white male composers.”

She hopes that people take the time to listen and understand more. She recommends that people listen to Black musicians, who have been sharing their stories and experiences online. There are also vital performing organizations, such as The Sphinx Organization —which has been addressing diversity in classical music through education and advocacy for decades — as well as Castle of Our Skins, which has been premiering short compositions by Black composers online.

A previous version of this story incorrectly stated that Delius worked directly as an overseer of enslaved people on his family's orange grove. This article has been updated to reflect that the family grove had in the past relied on the labor of enslaved people.  The composer's "Florida Suite" was inspired in part by the songs of the previously enslaved people and their descendants, whom he oversaw.

Mona Seghatoleslami is an announcer/producer for WXXI Classical 91.5, and serves on the board of fivebyfive. She can be reached  at classical@wxxi.org.