The resolution states that city resources will not be used to create a registry based on a person’s national origin, race, religion, or otherwise. And as with the 1986 resolution, it says city personnel will not inquire or request proof of immigration status or citizenship when providing services or benefits, unless specifically required to do so by law.

City Council chambers were filled with supporters of the resolution, cheering when a proponent spoke during the public input portion of the meeting, some waving signs. “Economics are not hurt by refugees,” said the Rev. Rod Frohman of the Presbytery of Genesee Valley, urging the City Council to pass the resolution. “The right thing to do is to do it. It’s in your own social economic self interest to do it.”

The resolution was proposed by Rochester Mayor Lovely Warren earlier this month.

“Rochester is not a city that holds people down and kicks people out,” Warren said in a press release. “We are a city that views diversity as a strength, and by providing access to jobs, safe neighborhoods, and quality educational opportunities to all, we can build even more avenues to success. After all, we are the place where Frederick Douglass penned an abolitionist newspaper as he helped slaves to freedom and where Susan B. Anthony cast the illegal vote that forever changed history. It is our duty to carry out the legacies of Anthony, Douglass and so many others, and stand by the many individuals who continue to make this city and this nation great.” 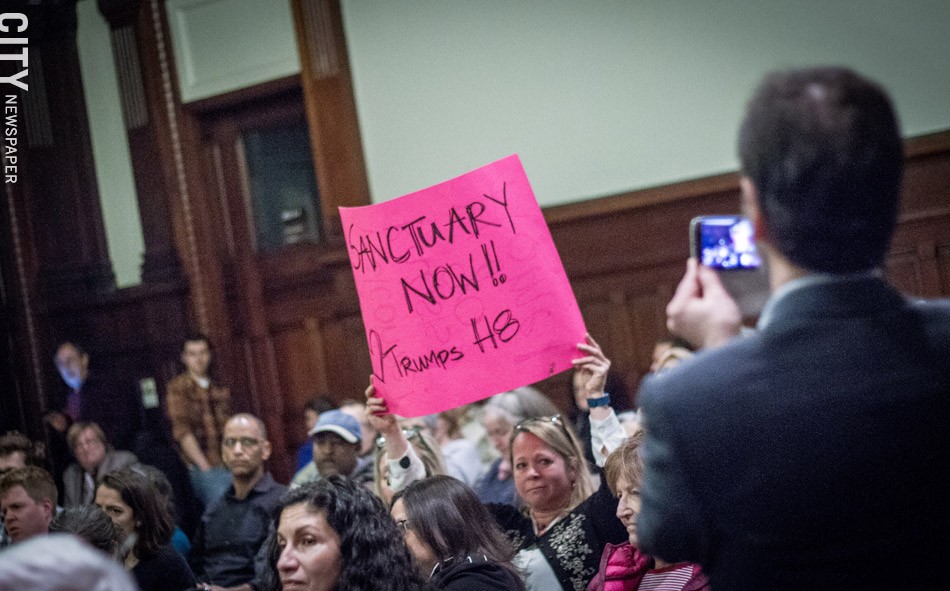 City Council’s legislation provides an important but modest amount of protection. The city is now on record as saying that it will uphold and protect the civil and human rights of “all individuals that come within its borders, including immigrants and refugees.”

Rochester police officers won’t conduct help Immigration and Customs Enforcement agents enforce the new Trump orders by, for instance, asking people about their immigration status when they’re conducting a criminal investigation. They won’t stop and question people simply because they appear to be immigrants. City staff won’t ask for proof of immigration status or citizenship when they’re talking with people about city services.

But that doesn’t provide protection for immigrants who interact with the county’s part of the criminal-justice system – courts, the county jail. Democratic County Legislator Mark Muoio has begun a push for the county to declare itself a sanctuary county.