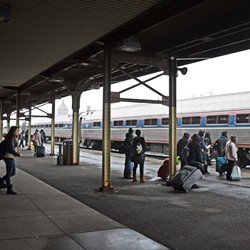 The project, which the state is managing, has received $26.5 million in funding commitments from the federal, state, and city governments. And during a press conference this morning, an Amtrak official announced that the rail company would continue to own and operate the center.

The current station was meant to be temporary when it opened in 1978, a fact pointed out during the press conference by Mayor Tom Richards and House Representative Louise Slaughter. It also does not comply with the Americans with Disabilities Act.

The new station, dubbed the Rochester Intermodal Transportation Center, will include a boarding platform and side tracks for passenger loading, speakers said. And it will be ADA compliant.

As for the design of the station itself, city officials have completed a preliminary plans. They draw on the former Claude Bragdon-designed station and incorporate community input, Richards said. The state plans to use as much of the city's plan as possible and it's forming an executive steering committee to guide the design process, McDonald said. Richards will serve on that committee, as will Slaughter.

"The design will be preserved," he said.

The DOT has a website devoted to the project, www.dot.ny.gov/rochesterintermodalcenter/.