August 03, 2020
Rochester residents threatened with eviction would be guaranteed free legal representation under a bill expected to pass City Council this month, as the city braces for an anticipated deluge of eviction cases from landlords looking to recoup income lost during the pandemic.

The legislation creates a so-called “right-to-counsel” pilot program with $460,000 in federal coronavirus relief funds that would be used to pay for tenant legal services as well as staff a hotline for questions about evictions.

The program would be operated by the Volunteer Legal Services Project of Monroe County, which would subcontract legal work to the Legal Aid Society of Rochester and Legal Assistance of Western New York. Council is scheduled to vote on the legislation August 18.

Tenants have mostly been protected from eviction since the outset of the health crisis, first by a statewide moratorium on evictions and, now, by the broader state Tenant Safe Harbor Act, which protects qualifying tenants from being evicted for nonpayment of rent between early March and the full reopening of their county.

But tenants grappling with eviction notices from prior to the outbreak or for reasons other than nonpayment of rent remain vulnerable, and the law does not prohibit landlords from filing for eviction and seeking money judgments to recuperate missed rent payments.

Tenants in either instance will have to defend themselves in court, said Mark Muoio, of the Legal Aid Society. New York has no law guaranteeing people facing eviction the right to an attorney.

“(The city is) allocating money so that our office can provide access to counsel to any person who is facing eviction in the city of Rochester that wants representation,” Muoio said. “It kind of, sort of, takes the form of a public defender.” 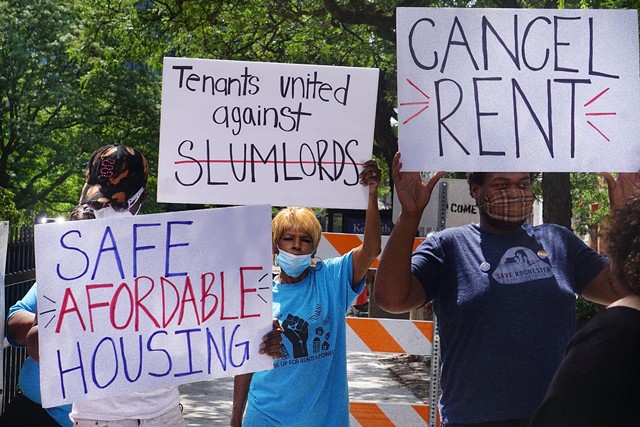 Rochester city courts are currently not hearing eviction cases, but there is no telling when they might again, and City Council members and tenant advocates have been sounding the alarm for months about the potential consequences of a wave of eviction cases.

“The burden of proof is on the tenant,” said council member Mary Lupien. “It’s so much easier to have a lawyer walk them through the process and make sure they’re able to prove their case.”

Advocates have expressed concern that without adequate legal representation in court, tenants who would otherwise be protected could face greater financial hardship, and possibly eviction, if they struggle to prove the burden the pandemic has had on them.

The notion of a right-to-counsel initiative didn’t begin with the pandemic. In 2017, New York City enacted a law, the first in the nation, guaranteeing legal representation to low-income residents facing eviction.

Muoio said conversations about the concept in Rochester began about two years ago. The Volunteer Legal Services Project has been operating a similar program in Irondequoit for several years, and is working to expand it to Greece and East Rochester.

Muoio cast the city funding as a “starting point.”

“Our estimate that we submitted to the county, city, and charitable organizations is it would take $800,000 for us to represent all of the people in the city of Rochester, in the towns of Greece and Irondequoit, and in the village of East Rochester,” Muoio said.

As the legislation stands, the city’s right-to-counsel program would run through June 2021.

The $460,000 for the program is part of a $2.9 million federal coronavirus relief funding package, the second such round of monies the city has received. The bulk of the funding — $2.1 million — is to be allocated to other eviction and homelessness prevention projects.

In June, $1.2 million from the first round of coronavirus relief funds was invested into eviction prevention and homeless services, most of which went to the Catholic Family Center. The Salvation Army, Veterans Outreach Center, Person Centered Housing Options, and the Open Door Mission also received funding from that aid package.