April 23, 2020
A day after Superintendent Terry Dade publicly acknowledged wanting out of town, a downstate school board claimed him as its own.

The Cornwall Central School District Board of Education in Orange County issued a statement late Thursday saying it had hired Dade as its superintendent. 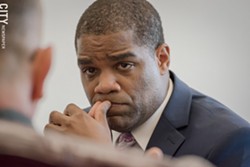 "When the Board of Education first met Mr. Dade, we knew we had a match," the statement read.

The statement called Dade "an accomplished and dedicated leader educational leader" whom the board said was "anxious" to join the district, which is located in Cornwall-on-Hudson and has about 3,200 students.

An undated memo from the board's president, Nancy Bryan, updating the school community on the search for a new superintendent and posted on the district's website read that the school board had selected the University of Rochester's Warner School of Education to assist with the search.

Dade notified Rochester board members of his decision to leave in an email at 9:42 p.m. Thursday that indicated his last day on the job would be July 23.

In the email, which the board made public on Friday, Dade said he had "a heavy heart" and that, "I remain committed to supporting you and the entire district as we work collaboratively to adopt a balanced budget, and I will continue to provide the leadership and planning necessary to support our students and families through this challenging pandemic."

Earlier in the day on Thursday, Dade told members of the Rochester school administrators’ union who had rallied outside the Rochester City School District offices to encourage him to reconsider leaving that his “decision isn’t final yet” and he “still has prayer and reflection to do.”

In a news conference on Friday, board President Van White said the board had heard from a lawyer representing Dade on Wednesday that the superintendent was interested in leaving the district and from media reports on Thursday that he had accepted a new job.

"We were blindsided," White said.


White acknowledged that the pandemic and the district's fiscal woes made for a challenging start to Dade's superintendency.

White also had choice words for the Warner School of Education, calling the school's involvement in the search that lured Dade away "totally inappropriate conduct."

The Warner School, which now runs East High School, issued a statement on Friday seeking to explain its role in the Cornwall superintendent search and saying it regretted playing a part in Dade's departure.

"We understand that the superintendent search assistance by the Warner School of Education to the Cornwall School District on its face looks like we may have undermined our commitment to Rochester, its educators, its residents, and most importantly its students and families, so we want to be clear that this is not the case and the result is entirely unintentional," the statement read in part.

It went on to acknowledge that the school's Center for Professional Development and Education Reform assisted the Cornwall school board in its search for a superintendent. The statement said the center has conducted nearly two dozen such searches for districts around the country since 2009 and that the Cornwall search was one of five it assisted with in the last year.

"While the Center was responsible for the Cornwall Central School District search, university leaders and East EPO leaders were entirely unaware of the fact that Terry Dade had become a candidate. While unfortunate, it was a completely independent and confidential process," the statement read.

"That said," the statement went on, "we are looking more closely at how this happened, so as to avoid any possible real or perceived conflict of interest in the future. University leadership takes seriously its commitment to the Rochester community and the stability of its schools and regrets that we had any role, however small, in Mr. Dade's departure."


Cornwall school board records posted on its website show that the agreement to employ Dade was signed Thursday and that it is effective July 24 and runs through July 23, 2023.

He was one of four finalists, some of whom, White suggested, the board may consider anew. He said, however, that while the district has never had trouble attracting national and local candidates, he would strongly consider a candidate with ties to Rochester.

"Given what we just went through, that is something I do think I will consider, familiarity with and ties to the community," White said.

Dade expressed support for several initiatives in place in Rochester, including a common curriculum, relying more heavily on data to influence decisions, and restorative justice practices, which promote inclusiveness and relationship-building to solve problems.

But he has spent most of his roughly 10 months on the job attempting to plug budget deficits that stemmed from the district overspending in excess of $27 million last year prior to his arrival. Consequently, he has laid off scores of teachers, and recently proposed $87 million in budget cuts that include more layoffs and reductions in cherished programs that met with resistance from the board and the community at large.

Dade said he has had to shoulder the burden of balancing the budget without the backing of the board.

Dade, whose annual salary is $250,000, signed a three-year contract with the board.

With reporting from WXXI News, a media partner of CITY.