June 14, 2019
Terror has reigned in Sudan since June 3 when its transitional government, the Transitional Military Council, killed more than 100 peaceful demonstrators.

Though the sub-Saharan African country is thousands of miles away, for some Rochester residents the tragedy hits very close to home. Rana Sulieman, Hiba Ahmed, and Olaa Mohamed straddle two worlds as dual citizens of the U.S. and Sudan, with family in both countries.

That’s why they are part of a core team of organizers staging a peaceful protest for Sudan this Saturday at the Liberty Pole. The demonstration starts at noon. 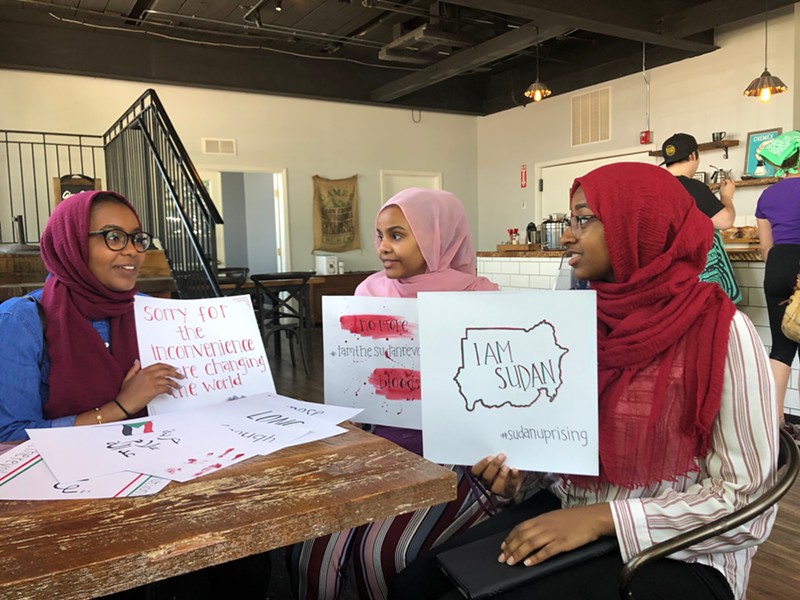 “We really wanted to do something to include the youth and show the biggest support that we can,” Mohamed, a student at Cornell University, said. Their fervor is fitting, given that Sudan’s six months of protests have also been largely youth-led: 61 percent of the nation’ population is under the age of 24.

The three organizers sat down for an interview with CITY and Sulieman, a medical scribe at Strong Hospital, brought a slew of signs she had made. Halfway through the interview, their bright colors and fluid Arabic lettering attracted a group of women from a nearby table, asking what they were for. The three began to explain.

Sudan’s initial uprising began in December last year, sparked by fuel shortages and the rising cost of food. The people’s dissatisfaction, however, was soon re-directed away from the economy, and towards Sudan’s former president Omar al-Bashir. A dictator who has ruled Sudan for 30 years, al-Bashir is wanted by the International Criminal Court on charges of genocide and war crimes.

Sulieman remembers being excited, but not surprised by the news of the first protests.

“It was 30 years in the making,” she said, describing it as something that “needed to happen — it was just a matter of when.”

Demonstrators, who wanted al-Bashir to step down, began a peaceful sit-in at the military’s headquarters on April 6. On April 11, the military ousted and arrested al-Bashir. His usurper, Lt. Gen. Abdel Fattah al-Burhan, heads a newly-formed military government: the Transitional Military Council.

The sit-in continued, as demonstrators demanded an immediate shift to civilian government. But it was abruptly disbanded on June 3, when government forces opened fire on the hundreds of protestors camped at the site. Over 100 lives were reportedly lost — a figure which includes 40 bodies retrieved from the Nile river. More than 748 were also wounded, according to the World Health Organization.

Mohamed said hearing about the killing was “heart-wrenching,” and changed her reaction to getting updates.

“There’s the underlying fear,” she said, “that as soon as I go on to social media I‘m going to see something like the massacre, or I’m going to see dead bodies.”

Citizens across the U.S. and the world have held protests in solidarity with Sudan. Instagram posts from demonstrations in Minnesota, Washington, D.C, and cities in England and Kenya were all posted last week with the hashtag #Iamthesudanrevolution. Many platform users have also turned their profile pictures blue in honor of the lives lost.

Seeing this momentum inspired the young Sudanese group to plan something similar in Rochester, with the hopes of raising awareness.

“There are a lot of people who don’t have any connection to Sudan, so there’s no reason for them to know what’s going on,” Sulieman said. In addition to planning the protest, the team has also prepared and shared an infographic that reconstructs the timeline of events in Sudan. It has been shared over 3,000 times on twitter.

In spite of all they are doing, the group wishes they could do more.

“At the end of the day, we’re here sitting from a very privileged position, we’re not on the ground actually going through what they go through, “ Sulieman said. “We do what we can.”