August 12, 2022
The couple accused of hosting a racist Juneteenth parody party at their palatial East Avenue home have long held positions of stature in greater Rochester, from sitting on the boards of influential organizations to playing supporting roles for professional sports teams and political campaigns.

On Friday, a day after the allegations against Dr. Nicholas (Ned) Nicosia and Mary Znidarsic-Nicosia surfaced, several of those connections were severed, as organizations quickly sought to publicly distance themselves from the husband and wife.

The Rochester Americans issued a statement announcing that it fired Nicosia as their team dentist, saying, “We do not tolerate racism in any form and it has no place in our world.” 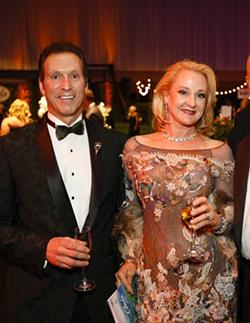 Highland Hospital, where Nicosia was the vice chair of the board of directors, initially released a statement saying it was “appalled” by the allegations against Nicosia, but stopped short of taking any action against him, suggesting that it had yet to reach him. He has a dental practice on Westfall Road.

Later, the hospital tweeted that it had asked for his resignation and that he had accepted.

"The behavior described in the allegations is deplorable and we in no way condone it," the tweet read. "We understand the profoundly negative impact these allegations have made on our community, and we felt swift action was necessary to continue to fulfill our mission and values."

Nicosia later said in a statement first reported by WROC-TV (Channel 8) that he had agreed to step down from the hospital board so so he could focus on restoring he and his wife's reputations.

“My wife Mary and I were surprised and disappointed about the allegations that have been made against us, and by the responses being posted on social media," read the statement. "We strongly disagree with how we are being characterized and are hopeful that the community will hold its judgment while we seek to clear our names.”

The Landmark Society of Western New York, for which Znidarsic-Nicosia, a real estate agent, was the vice president of development, announced it had suspended her pending an investigation into the allegations. The organization also removed her image and biography from its website.

“We were shocked and appalled to learn of the very serious allegations regarding a party that was held at the Nicosia residence this past July,” the statement read. “...The allegations, as described, in no way align with our organization’s core values.”

Reached on her cell phone, Znidarsic-Nicosia declined to comment on the allegations against her and her husband.

The Nicosias are accused of hosting a theme party at their 9,000-square-foot mansion on July 7 that brazenly ridiculed Juneteenth, the holiday celebrating the end of slavery in the United States, by perpetuating racist stereotypes of Black people. The menu consisted of Kentucky Fried Chicken and Hennessy cognac.

The party was also said to feature a woman dressed as County Legislator Rachel Barnhart dancing in a mocking and sexual manner for attendees, and images of the heads of local Democratic political figures on stakes, including members of the Police Accountability Board and City Councilmember Mitch Gruber.

The allegations were leveled by Jerrod Jones, a 14-year veteran of the Rochester Fire Department, who said he was brought to the party while on duty by his captain, Jeff Krywy. In a notice of claim against the city and the department, Jones contended that some Rochester police officers that he did not name also attended the party.

The Police Department issued a statement saying that disciplinary action would be taken against any officer found to have participated in the affair.

Meanwhile, several elected officials to whom the Nicosias have donated over the years, including Barnhart and Mayor Malik Evans, who a day earlier strongly condemned the party, announced they would reject the contributions. La’Ron Singletary, the former city police chief who is running for Congress as a Republican, also said he would refuse the couple’s money.

Evans and Singletary, to whom the Nicosias gave $250 and $1,250, respectively, said they would return the funds. Barnhart, who received $100 from the couple during her mayoral run in 2017, said she made a donation in that amount to the Community Place of Greater Rochester.

The Nicosias have a history of making relatively modest political donations to both Democratic and Republican candidates. In recent years, though, records show they have tended to favor Republicans.

Barnhart has called on the Rochester City Council to open an independent investigation to determine who attended the party. The Greater Rochester Majority State Delegation, which includes Senators Samra Brouk and Jeremy Cooney and assemblymembers Harry Bronson, Sarah Clark, Jen Lunsford, and Demond Meeks, are calling for the same.

“The allegations outlined today by Rochester Firefighter Jarrod Jones, describing a situation in which he was forced to attend a racist and misogynist Juneteenth Spoof party while on duty, are disturbing beyond words,” a statement from the delegation reads. “This behavior should not be tolerated anywhere, especially in workplaces and our public and government agencies.”

Nicosia Dental on Westfall Road has been in business more than 50 years and Nicosia is the second generation of his family to own the operation, according to his LinkedIn account. The page also lists him as the dentist for the Rochester Knighthawks professional lacrosse team and Rochester Institute of Technology athletes, although a college spokesperson said the school could find no official affiliation with Nicosia.

Testimonials to his services there suggest his business has given extensively to local charities for cystic fibrosis research, and the preservation of local history and landmark properties.

The Nicosias bought their East Avenue home in 2000 for $650,000, according to property records.

A year later, Znidarsic-Nicosia wrote a letter to the editor of the Democrat and Chronicle lamenting the state of the city.

“My husband and I have chosen to live in the city of Rochester, raise our children and restore a landmark home on East Avenue,” she wrote. “We enjoy city living and all it has to offer, yet our suburban development friends all think we are crazy. The crime, the sad state of the school system, the taxes, and now the proposed tax increase.

“I am beginning to think our friends are right.”