Rochester shows love with valentines for girl pepper-sprayed by RPD

Phyllis Siembor and her 15-year-old goddaughter stopped by a candy shop this week with two red envelopes — and a purpose.

The envelopes contained valentines for a 9-year-old girl whom Rochester police officers handcuffed and pepper-sprayed during a mental health crisis two weeks ago.

Before sliding the cards into Candy Galore's rainbow-shaped dropbox — one of a handful of similar boxes across town where people can leave notes — Siembor explained what compelled her to stop by.

“We wanted to find a way to embrace this little girl and send her some love,” Siembor said.

Siembor, a former mail carrier, said when she heard about the young girl, she thought about the time she had to use pepper spray on her route.

“I only used it once on a dog that was rushing me,” she said. “And when I found out about that little girl, I could see the dog writhing in the snow. The reaction. I’m talking about a dog.”

“And that’s a human. She’s trying to say that that’s a human,” said Chimere Fullilove, the shop owner. “That was a dog and to see the dog ball up and imagine a human ...” Candy Galore is on Jefferson Avenue, near where Daniel Prude was detained by police last March. Prude suffocated when police restrained him and died a week later.

Despite the community outcry that followed the news of Prude's death, Fullilove said she sees no difference in how police treat residents.

Fullilove’s originally from Illinois. She and her family moved to Rochester in 1992. When she was about 10 years old and living in South Side Chicago, she said police approached her and her sister and friends. It was just before curfew.

“I can remember the police stopping and just pulling up and was like, ‘Hey, I should take y’all in a white neighborhood and drop y’all off and have them beat y’all ass,' ” she said.

That experience has always stuck with her, Fullilove said. So when she was asked to be a part of the project to collect valentines for the 9-year-old, she was happy to do it. 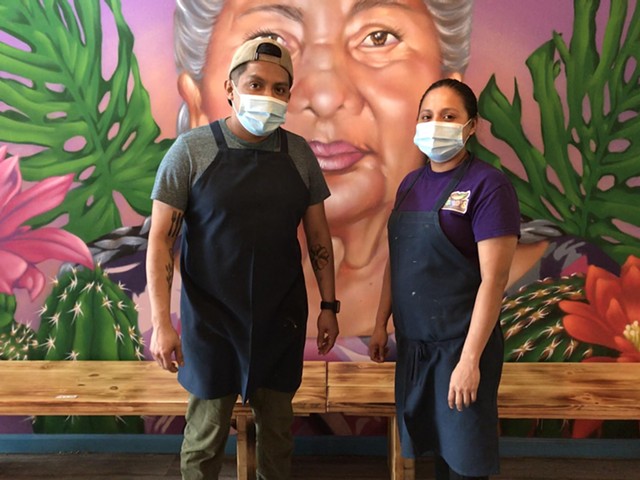 Neno’s Mexican restaurant on Monroe Avenue is another of the eight locations where people can drop off and sign the cards. Ojayra Rita is one of the owners.

Rita, who is from Mexico, said when the opportunity came to show support, the answer was clear: She wanted to give back to the community that welcomed her family as they made a home here.

"What happened to the girl can happen to others,” she said in her first language, Spanish. “There are cases like this around the world, and it may be that increased awareness can leave an impact on society so that the same doesn’t happen to other children.”

Among the project's organizers is Carlie Fishgold. She said it initially began as a family undertaking with her young daughter.

“Then like an evolution of this idea became a way to get people to go outside of their normal routes that are so shaped by redlining practices,” said Fishgold. “It’s a way to dissolve those invisible barriers.”

About 250 ready-made valentines were distributed to the locations for people to fill out. As valentines are collected, Fishgold said she hopes the cards and notes brighten the young girl’s day and let her know that she is loved and supported. She also hopes to see a stronger community bond form through this collective action.

“We are in an international spotlight regularly for police brutality, racism and atrocity, and human rights violations,” she said. “It’s going to take more people. Get out there, do more, but it can be through kindness.”

The following places are collecting valentines:


Noelle Evans is a reporter for WXXI News, a media partner of CITY. She can be reached at nevans@wxxi.org.