April 03, 2020
Running is considered an individual sport, but it’s also a very social one.

Couples jog together. Running groups hit trails together or to go on training runs. Sometimes friends get together for a casual trot followed by some beers.

But the coronavirus pandemic has put a temporary end to those meet-ups, as well as early season races and fun runs. Local runners are still pounding streets and trails, but many find themselves longing for the social aspect of the sport.

That sense of community is what led members of the non-profit running club #TrailsRoc to organize the Virtual COVID-19 Miler, a virtual 19-mile race in which people run individually on treadmills, streets, or trails, that began Friday. The race runs through the weekend, and participants are asked to report their results to organizers, who will share them publicly on their Facebook page. (Participants may run, walk, or hike a shorter distance, such as 19 kilometers or 1.9 miles.) 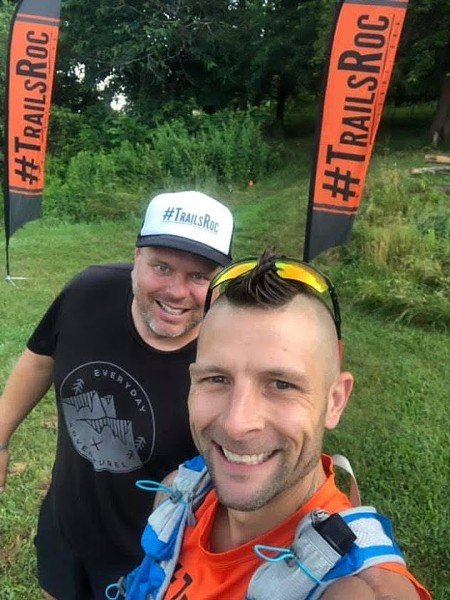 Organizers are encouraging participants to connect on video chats or social media while they are running and to upload photos to the #TrailsRoc Facebook page.

“It gives people the opportunity to participate in something together, but not ever be together,” said race director Eric Eagan.

The whole idea started after local group runs and races were canceled to promote social distancing, Eagan said. One day he got a FaceTime call from his friend and frequent running partner, who was putting in some time on a treadmill and wanted to run with him.

“As we were talking he was like, ‘You know, we could do something like this and make it a fund-raiser because the stores are closed,’” Eagan said. “And I thought that’s not a bad idea.”

The race attracted 623 registrants and raised $17,000, Eagan said. The proceeds will be distributed equally to three local running stores, all of which are hubs for the local running community: Rochester Running Company, Fleet Feet, and Medved Running & Walking Outfitters

The stores are all temporarily closed in compliance with state orders that are meant to slow the spread of coronavirus. That means their employees are out of work and the stores aren’t bringing in revenue, Eagan said.

Each store has, however, donated a pair of running shoes which will be raffled off randomly to three race participants.

Virtual races aren’t new to the running world. As social media has become more ubiquitous in people’s daily lives, some organizations saw opportunities to hold races that depend less on a single event in a fixed location, and instead emphasized sharing the experience through photos and videos, explained Jonathan Griffiths, owner of Rochester Running Company. The low overhead also makes virtual races appealing.

“It’s unique in this time because it can keep our community together while we’re separated,” Griffiths said Friday, as he huffed his way through mile 12 of his Virtual COVID-19 Miler hike.

Griffiths said he appreciated the support from #TrailsRoc and noted that shops and runners depend on each other.