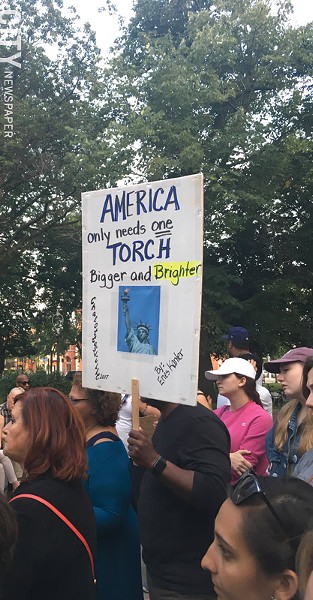 A 20-year-old white supremacist named James Alex Fields Jr. rammed a car into a group of counter-protesters in Charlottesville, Virginia, on Saturday, killing 32-year-old Heather Heyer and injuring dozens of others. Rochester community members swiftly responded to the tragedy with solidarity gatherings held on both Saturday and Sunday nights in Washington Square Park.

Saturday's vigil and discussion was organized by Rochester Black Rose. Community members and activist leaders took turns addressing the crowd; more than one person emphasized the need for the left to be vigilant about festering pockets of racists in Rochester who may become emboldened if uncontested.


In addition to anger and sorrow, there was a palpable tone of freaked-outedness, but leadership urged bravery and solidarity when confronting bigots.

"You know people who are like this," one woman said. "They think this is their moment. If you're afraid to call them out, call any of us," she said referencing present activist group members.

Another person pointed a finger at the people who run the country — jabbing at leaders who encourage divisions based on race, ethnicity, religion, sex, gender, and sexual orientation — ultimately "keeping us from uniting and overthrowing this crappy system" that is bad for all of us, the speaker said.

Yet another attendee spoke of the need for mutual defense and mutual aid. Between speakers, chants rang through the park: "I believe that we can win" and "Fuck Donald Trump," the latter in response both to his frequent encouragement of violence among his followers and his unwillingness to unequivocally condemn the hate groups and Fields's action. If Fields was a black or brown person Trump would be calling it terrorism, someone said.

Others expressed disgust at the police who idly watched the violence in Charlottesville. Two people in Saturday's crowd held up a hand painted sign that read "Strong communities make police obsolete," reflecting the tone of the vigil's tagline: "Mourn the dead, fight for the living!"

Walking among the shaken, dejected, and angry bodies present at the vigil, it was clear that Heyer's death wasn't an abstract idea to many of the more seasoned protesters. Young and old, they've been in dangerous standoffs — with the opposition or with police garbed in riot gear — while defending populations targeted by hate.

A member of the crowd conveyed dread to a neighbor, murmuring a fear that Fields's action had probably set a precedent for murdering protesters. Ever since Black Lives Matter marches began holding up traffic, unempathetic members of the public have growled that it should be legal to hit protesters who are in the streets, and some legislators agree.

"The far right has one critical tool, and it's violence," Colin O'Malley of Metro Justice said gravely. "I hope the naivete of a society that thinks these fuckers are fighting for free speech is out the window now."

People embraced and a mournful bagpipe dirge floated over the crowd during a moment of reflection, and afterward groups lingered to discuss and debate into the evening.

At the Sunday night gathering, put together by Indivisible Rochester and Action Together Rochester, speakers included community leaders who urged the audience to speak out against hate speech and actions in everyday life. Activist leaders challenged people who identify as allies to exert more effort.

Activist Melanie Funchess said that allies are only as good as their last stand. "If you're gonna be an ally, it's put up or god doggone it shut up," she shouted. "I want to come here and talk about peace 'cause I'm Mama Mel, and I'm a peace-lover, but I'm tired of y'all!"

Funchess then expressed frustration with respectability politics, adding: "Just like you stand with me in Beechwood, you need to stand on Avenue D."

Rochester Deputy Mayor Cedric Alexander, who is also a former city police chief, spoke of equal protection under the law, a point which a later speaker refuted when she cited law officials "deliberately looking away" in cases where they had ample reason to expect trouble from hate groups and prepare for it.

Rally in solidarity with #Charlottesville in Washington Square Park

Artist and professor Athesia Benjamin spoke of the casual racism she's experienced from white children in her neighborhood, stating that this results from a lack of connection with black people in their community. "Popular culture is indoctrinating your kids," she said. "Unless you speak about this every single day, they will be the next generation of people who will be just slightly uncomfortable around people of color."

The community needs to move expressions of solidarity off social media and into the real world, she said, to diversify its gatherings and generate genuine community. "Then you're making a difference," she said, "when you begin to invite people to dinner."

A Black Lives Matter rally and cookout was held Monday night in Baden Park, hosted by Spiritus Christi Anti-Racism Coalition (SPARC) and other groups. It featured talks by church leadership and community resource facilitators. The tone was an uplifting call to action to raise the entire community through group advocacy, like 'we got each other, we just gotta do this.' "If all of us don't make it none of us have truly made it," said Reverend Myra Brown of Spiritus Christi.

Tonight at #BlackLivesMatter rally, Baden Park: Rev. Myra Brown of Spiritus Christi -- "I want to address the black people in the audience. If you're black, stand up. I want you to know, and everybody else in the space to know, that I believe that black lives matter. Because you are brilliant. Black people are amazing, brilliant, creative, awesome, compassionate, wise, communal. And I appreciate everything that being black has taught me."

For opportunities to get involved, watch for updates on our activism calendar.