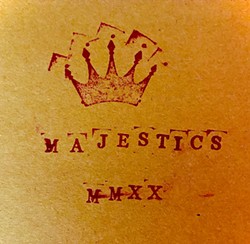 The Majestics have returned mightily with “Majestics MMXX” with a musical fist in the air and a steady, rocksteady-reggae groove.

The band's appeal is found partly in its longevity — with a tenure that goes back all the way to the 1970s when it was on Record Archive’s imprint and fans still called it Bahama Mama — and also in its willingness to color outside the lines. Though they've shared the bill with legendary artists like Burning Spear and Lee “Scratch” Perry, traditional bonds and sounds have eluded them.

The Majestics’ sense of adventure shines through on all eight tracks from “Majestics MMXX,” as the band gets keyed up with Bob Dylan’s “What Was It You Wanted,” followed by “Drunken Sailor,” an Irish jig featuring Linda Rutherford and her traditional fiddle-playing. The latter track demonstrates that the band is capable of anything.

Band members Ron Stackman, Lou LaVilla, Kevin Hart, and Jim Schwarz have rolled with the punches thrown by COVID-19, too. “Majestics MMXX” started in the band’s rehearsal studio in March, and was polished up on their individual computers after the virus lowered the boom.