January 22, 2020
Most of the people at the January meeting of the Rochester chapter of the National Organization for the Reform of Marijuana Laws were regulars — veterans who use cannabis as a treatment for post-traumatic stress and enthusiasts fighting for the right to light up a joint.

Then there were the four noticeably tall men giggling and wearing perpetual grins, who stuck out among the dozen or so attendees, and the woman with them. They were members of the Rochester RazorSharks, a professional minor-league basketball team in the re-launched Premier Basketball League (PBL).

The woman, Jennifer Moore, the team’s chief executive officer, had recently struck a sponsorship deal with the NORML chapter that is believed to be the first of its kind: In exchange for NORML paying the team $250, half the cost of the team’s smallest sponsorship package, the RazorSharks have agreed to promote the cannabis crusading organization’s advocacy efforts.

Under the agreement, players are free to indulge cannabis in all its forms without repercussions, and the team will actively use its platform to spur conversations about cannabis with the community.

The league leaves drug-testing up to individual teams, and the RazorSharks do not test players. “If I see one of them looks like they’re snorting coke, then we’ll have a talk,” Moore said. “But for THC? No.”

Last month, RazorSharks players took part in NORML’s Communities and Cannabis event, a discussion on the future of legalizing recreational use of cannabis and its potential impact on Rochester. As the state’s legislative season gears up, RazorSharks members will travel to Albany with NORML as part of their lobbying efforts. Moore said she views the partnership in the vein of a social justice mission.

“Instead of burying our heads in the sand, why don’t we make a difference?” asked Moore, who bought the RazorSharks franchise with her husband Keith last August. “Why don’t we look at the War on Drugs, the disproportionate punishments, and use it as a platform?”

The marriage between NORML and the RazorSharks is anything but normal.

While attitudes and laws around cannabis are changing across the nation, professional sports teams have been slow to catch on.

The National Football League, for instance, randomly tests 10 players per week, per team when the league is in season. Any player who tests positive for cannabis for the first time is required to enter a substance abuse program, then fined increasingly with each subsequent positive test until the sixth, when the player is banned for a year.

National Basketball Association players are subject to four tests per year. The league has a similar policy as the NFL for the first fail, followed by a $25,000 fine, then a five game suspension for each ensuing fail.

Major League Baseball made waves last month after announcing it was removing marijuana from the list of banned substances — perhaps a fitting edict for a league whose fans will in June celebrate the 50th anniversary of Pittsburgh Pirates pitcher Doc Ellis throwing a no-hitter under the daze of LSD. (Acid is still banned.)

The National Hockey League is considered the most progressive of the major sports leagues when it comes to cannabis. Under its collective bargaining agreement with the players’ union, the league can only test a maximum of 60 players a season. The goal, league officials have said, is not to punish users of cannabis, but to identify potential abusers and get them help.

Meanwhile, the minor-league North American Premier Basketball League, the successor to the PBL, was reportedly the first professional sports league to accept a sponsorship from a CBD company when it partnered in 2018 with Green Roads Athletics, a Florida-based outfit that manufactures cannabidiol products for athletes. The PBL folded in 2017 after 10 seasons but launched anew in 2020 with four teams, including the RazorSharks.

The RazorSharks, which also have a sponsorship from the CBD and hemp company Roc City Cannabis, approached NORML about forming a partnership, team and the organization representatives said.

At the NORML meeting, RazorSharks players said anti-marijuana laws perpetuated what they cast as a culture of hypocrisy that embraces alcohol and condemns cannabis.

“Last year I was playing with a Syracuse team, the Syracuse Stallions, and my coach actually told me to go out, drink beer and go to sleep, to gain deadweight,” said guard George Graham. “I ended up gaining like 20 pounds.”

Likewise, many NORML members are critical of how normalized alcohol is in a society where recreational use of marijuana remains illegal.

“It’s a common theme almost everywhere in society,” said Mary Kruger, the founder and executive director of Rochester NORML. “It’s something embraced almost, it’s really, really normal to talk about and celebrate, but there’s also a lot of negative health effects of alcohol.” 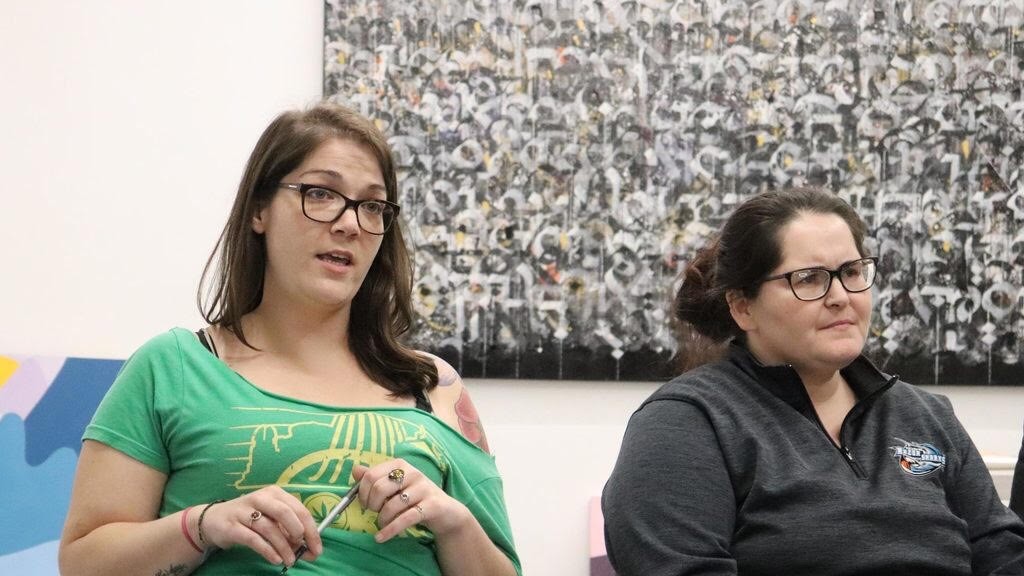 Moore, the owner of the RazorSharks, said she has never used cannabis. But she said she gained an appreciation for how it was regarded in the public esteem in California, where recreational use is legal, while she was working as the vice president of another minor-league team, the San Diego Waves.

“We had worked for the RazorSharks for years before owning the team, and we saw the guys feeling, not necessarily ashamed, but it was like something they had to hide, or something they were ashamed of,” Moore said of using cannabis. “Versus going out to San Diego, where it was just not a big deal.”

RazorSharks guard Hasiin “Peach” Dixon is one such player. He said he felt like he had to hide his cannabis use on previous teams. His enthusiasm for pot comes with a simple, timeless explanation.

“Honestly, I just use it to chill out,” Dixon said. “It winds me down after a tough day of working out, or going through anything. It feels more comfortable just being able to say that, as a basketball player.”

Now at the helm of the team, Moore saw in the partnership with NORML an opportunity to educate the public, and the league’s players, about cannabis rather than turn a blind eye.

That decision didn’t come without some criticism.

“We’ve gotten some feedback like, ‘Oh, how could you have some players represent this, an illegal drug, and you’re going to put them in the schools?’” Moore said. “If you don’t think in every city school kids aren’t already smoking weed, then the parents are ignorant.” 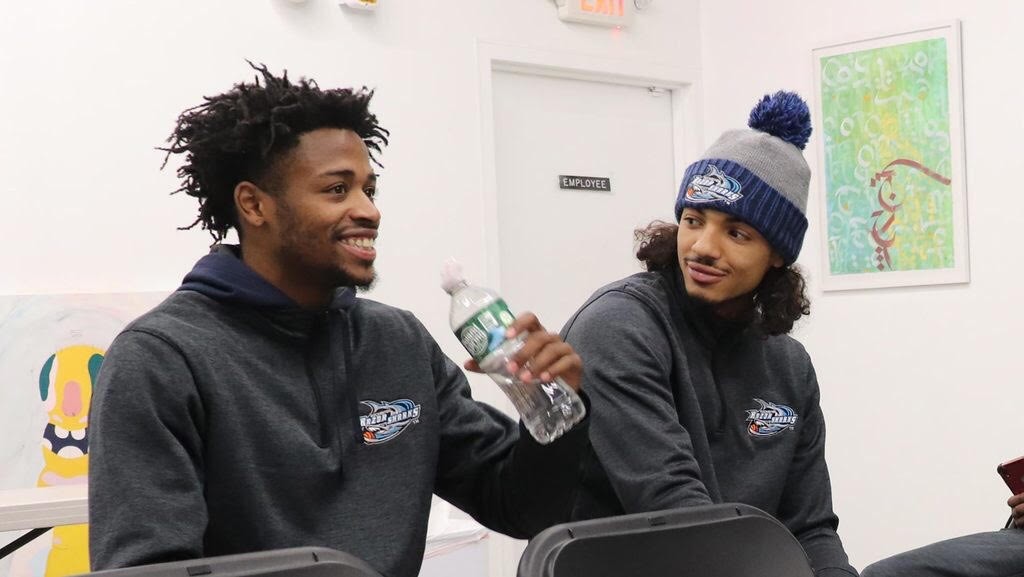 Last year, expectations of New York legalizing marijuana was high among the advocacy crowd. This year, anticipation is even higher.

Governor Andrew Cuomo vowed in his recent State of the State address to legalize recreational use of cannabis and was to release his budget proposal this week. As both Michigan and Illinois went live with retail recreational markets this year, pressure is on Cuomo to keep his plans of being a pioneering cannabis state from going up in smoke.

So begins the ramp-up of the advocacy season for NORML.

Earlier this month, the group participated in a state-wide virtual lobby day organized by Empire State NORML, an event which had people from across New York dialing up lawmakers to urge legalization. Throughout the legislative season, Rochester NORML members will continue advocating, hosting community events, and traveling to Albany to petition lawmakers.

Here in Rochester, Kruger sees the next critical step as promoting community engagement. That’s where the RazorSharks, which played its first two home games this season at Edison Tech High School, come in.

Every partnership and member counts in the advocacy agenda, Kruger said, and relationships with groups like the RazorSharks can be key to reaching a more mainstream audience.

“I couldn’t believe it when we got a DM from the RazorSharks. It was just like, what?!” Kruger said. “The amount of feedback we’re getting on social about this partnership happening is just, people are blown away.”