Rochester Police to take a “holistic approach” to crime spike

Rochester Police Chief Cynthia Herriott, during a news conference Thursday, said shootings and homicides have increased sharply, a trend that stretches back about a year. As of Wednesday, Rochester had its 11th homicide of the year; Herriott said gun violence is at its highest rate in at least four years.

“I also wanna stress that this is not something that’s unique to Rochester, this is something that is going around the country and the state,” said Herriott. “We’re going to do all we can to see that we’re not going to have a repeat. I won’t stop until it's minimal to none.”

Herriott turned to Executive Deputy Chief Andre Anderson for details on the department's efforts. He said it’ll take a “holistic approach” because it takes the entire community to slow down violence. He said they must start by targeting who he calls “prolific offenders.”

“It's not us going out into the community and targeting people of color, it is a victim oriented response,” said Anderson. “It’s identifying people who are at the core of committing crimes, and applying resources and individuals to identify them while making sure that we remove them off the street.”

Anderson and Herriott said they’ll reach out to judges to discuss how they dole out punishment on specific crimes for these repeat offenders. Anderson said paroles were responsible for about 10 of the last 25 shootings in the city.

“There's an obligation there on both sides of the fence in order to address individuals who are on parole who are committing violence and shooting people,” Anderson said. “The victims require that, the community deserves it.” 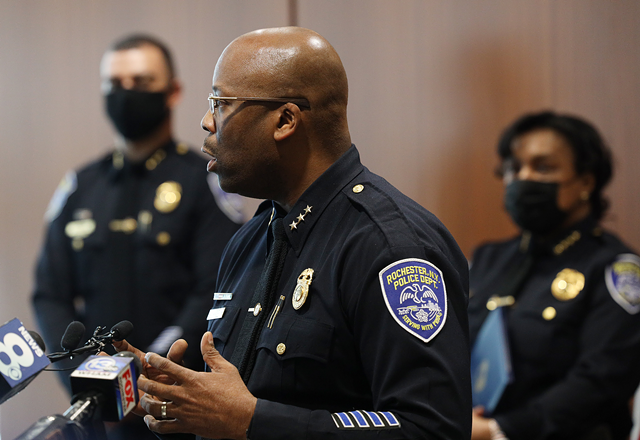 Part of the plan is to work with judges and lobby for stiffer penalties for specific crimes but when asked to clarify, Herriott and Anderson would not go into specifics. The department will also increase foot patrols, community policing efforts and give witnesses extra protection when they talk to police.

Herriott also addressed the city’s plan to reinvent policing, as mandated by New York Gov. Andrew Cuomo. She said she saw the plan as an opportunity to move the department forward.

“We’ve been working on this plan all the long and giving our input, listening to what the community has to say, so I look forward to it,” said Herriott. “We’re not waiting, we’ve already started to put out new policies, more are coming out in the following days and several weeks, We’re moving forward.”