PHOTO BY MAX SCHULTE / WXXI NEWS Police confronted protesters in an effort to move them away from City Hall on Wednesday morning.
Sixteen people were arrested Wednesday after a standoff outside City Hall between Rochester police and the protesters calling for justice in the death of Daniel Prude.

Prude was restrained by city police in March; he died a week later. Protests have been ongoing since earlier this month when Prude's family and attorney released police body camera footage of the incident.
On Tuesday, a group of protesters calling for the resignations of Mayor Lovely Warren, Monroe County District Attorney Sandra Doorley and Locust Club President Mike Mazzeo marched to City Hall. They also demanded that the officers involved be fired and prosecuted and vowed they wouldn't leave City Hall until their demands are met.

The group stayed through the night, some erecting tents on Church Street outside the government building. 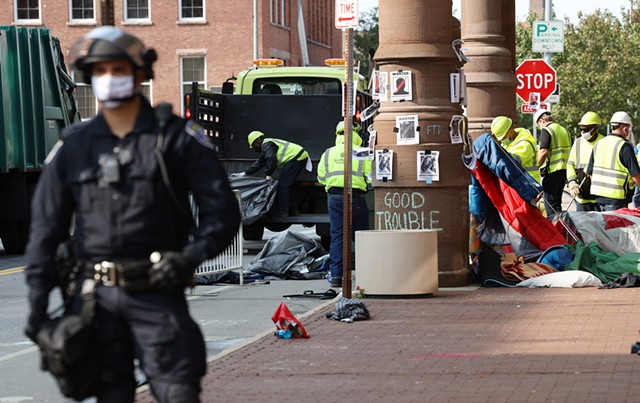 Around 8 a.m. Wednesday, police ordered protesters to leave and said if they didn't comply, they would be arrested. Sixteen people ultimately were charged with disorderly conduct, city police said Wednesday afternoon.

City crews removed protesters' tents and gear, took down signs and banners from City Hall's entrances and attempted to clean red handprints off the building.

After negotiations involving the Rev. Myra Brown of Spiritus Christi Church and Rochester Police Capt. Ray Dearcop, police allowed some protesters to pick up gear. They also told protesters that they would be allowed to stay at City Hall as long as they don't block the building's entrances.

City employees also reinstalled an American flag Wednesday. Protesters had taken it down Tuesday and replaced it with a Black Lives Matter flag. That flag is now flying on another pole.

Protesters are asking to remain at City Hall after police removed tents from the streets and steps from over night @maxrocphoto @rgorbman pic.twitter.com/oFYoCHHnrt

Standoff between the remaining protesters and a line of police continues on church street pic.twitter.com/cA5xen9EI3

This is a developing story. Check back for updates.