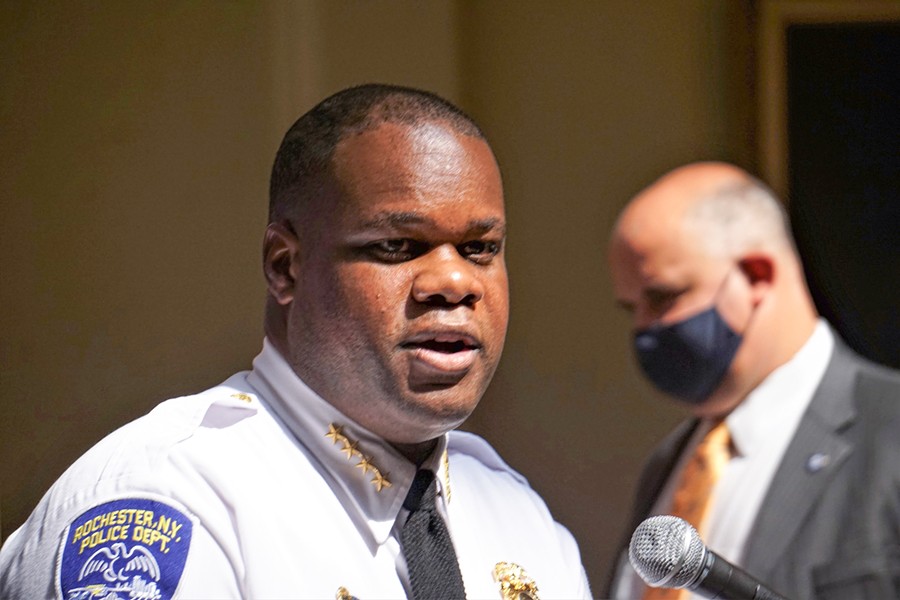 PHOTO BY GINO FANELLI RPD Chief La'Ron Singletary.
Rochester Police Chief La’Ron Singletary announced his resignation Tuesday and several of his department's highest ranking officials either stepped down or were demoted in what was the starkest political fallout yet from the news of the death of Daniel Prude.

The departures included the chief, one of his deputies, and two commanders, as well as the demotions of two other deputy chiefs and another commander, and came three days after the state attorney general announced that she would impanel a grand jury to consider evidence in Prude's death.

The news rattled the highest levels of government in a city already shaken to its core.

Mayor Lovely Warren told City Council members during what was to be the first of a daily briefing on the escalating scandal engulfing her administration that she had only learned of the chief and his deputy's resignations moments before their meeting at 3 p.m.

Singletary, 40, and one of the deputies, Joseph Morabito, announced in separate and simultaneous news releases that they would be retiring.

In a sign of how fresh the news was to Warren, she could not answer the question from city lawmakers as to whether the resignations were effective immediately.

Warren later clarified during a brief City Hall news conference at 5 p.m., at which she took no questions, that Singletary would remain in charge until the end of the month. She concluded her remarks by saying that she was committed to implementing necessary reforms in the Police Department and working with City Council to chart a path forward.

"I know that there are many questions, but this just occurred and, honestly, I don't have the answers today," Warren said. "However, I will work diligently, along with City Council to provide those answers and share them in the coming days as I have them." 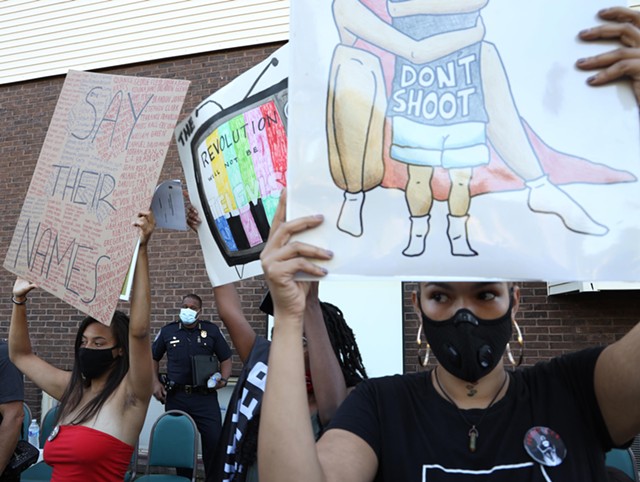 Singletary cited attempts by “outside entities” to impugn his integrity as the reason for his departure.

“As a man of integrity, I will not sit idly by while outside entities attempt to destroy my character. The events over the past week are an attempt to destroy my character and integrity,” Singletary said. “The members of the Rochester Police Department and the greater Rochester community know my reputation and know what I stand for. The mischaracterization and the politicization of the actions that I took after being informed of Mr. Prude’s death is not based on facts, and is not what I stand for.”

Filing retirement papers enables the officers to keep their pensions and benefits. Singletary had 20 years on the force.

Singletary joined the force on July 31, 2000, according to the Police Department, and was appointed chief by Warren in 2019 to great fanfare.

But he has been accused of covering up the death of Prude at the hands of officers, and calls for his resignation and that of the mayor have swelled since the news of Prude’s death surfaced last week.

Warren has said that Singletary had told her a few hours after Prude fell unconscious and stopped breathing while being restrained by police in the early morning hours of March 23 that Prude had overdosed, suggesting that she was misled.

Prude died a week later, on March 30, although doctors at Strong Memorial Hospital, where paramedics took Prude after his arrest, told family members prior to his death that he was severely brain damaged.

Asked specifically over the weekend whether he lied to the mayor, Singletary said, “What I did was I provided factual information based on the incidents I had at the time.”

With the eyes of the national media corps on Rochester, word of the shake up quickly circulated, even grabbing the attention of President Donald Trump. The presidents seized on the news in an effort to bolster his re-election campaign, falsely claiming that "most of the police" in Rochester had resigned.

Police Chief, and most of the police in Rochester, N.Y., have resigned. The Democrat Mayor and, of courses, Governor Cuomo, have no idea what to do. New York State is a mess - No Money, High Taxes & Crime, Everyone Fleeing. November 3rd. We can fix it!

The Rochester Police Locust Club, the union representing officers, released a statement pinning the shake up on a lack of leadership at City Hall.

“The events that have unfolded today have taken us completely by surprise, as they have everyone else," the statement read. "What is clear is that the problems of leadership go directly to the Mayor’s Office.”

Free the People Roc, the activist organization that has been coordinating the nightly demonstrations outside Police Department headquarters and had been called for Singletary to step down, hailed his resignation as a victory.

Indeed, the crumbling of the department's top brass appeared to have the effect of emboldening the group to continue to state protests until more heads rolled.

"We accept Police Chief La’Ron Singletary’s resignation and the resignations of the entire RPD Command Team," read a statement from the group. "Our movement for justice is winning, and it’s because of this incredible community, showing up night after night.

"Let’s keep the pressure up until all those responsible for Daniel Prude’s murder and cover up — including Mayor Lovely Warren — have resigned, taken responsibility, and donated their pensions to the families they allowed to be harmed," the statement went on. "Together we have the ability to hold those in power accountable and bring an end to systemic police violence in our community." 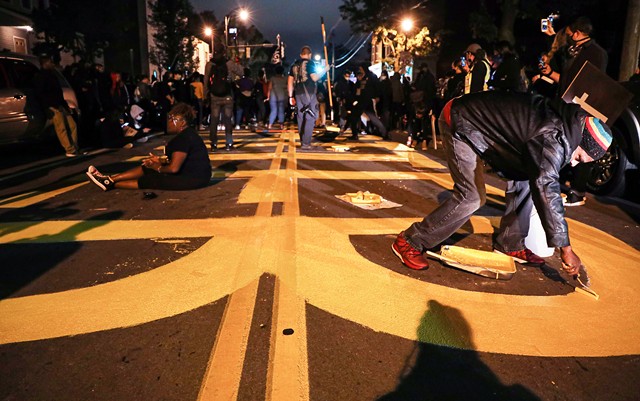 By the early evening, hundreds had gathered at the corner of Jefferson Avenue and Dr. Samuel McCree Way, where Prude was arrested, as they have since news of his death became public last week. Some had begun painting "Black Lives Matter" in bold, yellow letters on the street.

"They said that the mayor and the police chief are never gonna resign," one demonstrator shouted gleefully into a microphone at the intersection to resounding applause. "Well guess what, stupid? We got them the f—- out of there!"

Later in the evening, demonstrators painted "Murderers" in bold, red letter on Exchange Boulevard outside the Public Safety Building that houses the RPD headquarters.

In the news release announcing his retirement, Morabito made no mention of Prude and focused on his 34 years of service. Morabito joined RPD on Dec. 5, 1986, according to the Police Department.

“I have often reflected on my time growing up in this City, and the many friends and neighbors who helped guide me and encouraged my decision to become an officer,” Morabito said. “I have never regretted that decision, and the people who I have had the privilege of assisting throughout my service, and will always consider my membership with the Rochester Police Department as one of the proudest achievements of my lifetime.”

The other changes to police brass included commanders Fabian Rivera and Elena Correia announcing their retirement, deputy chiefs Mark Mura and Mark Simmons being demoted to their previous ranks of captain and lieutenant, respectively, and Commander Henry Favor being returned to his previously held rank of lieutenant.