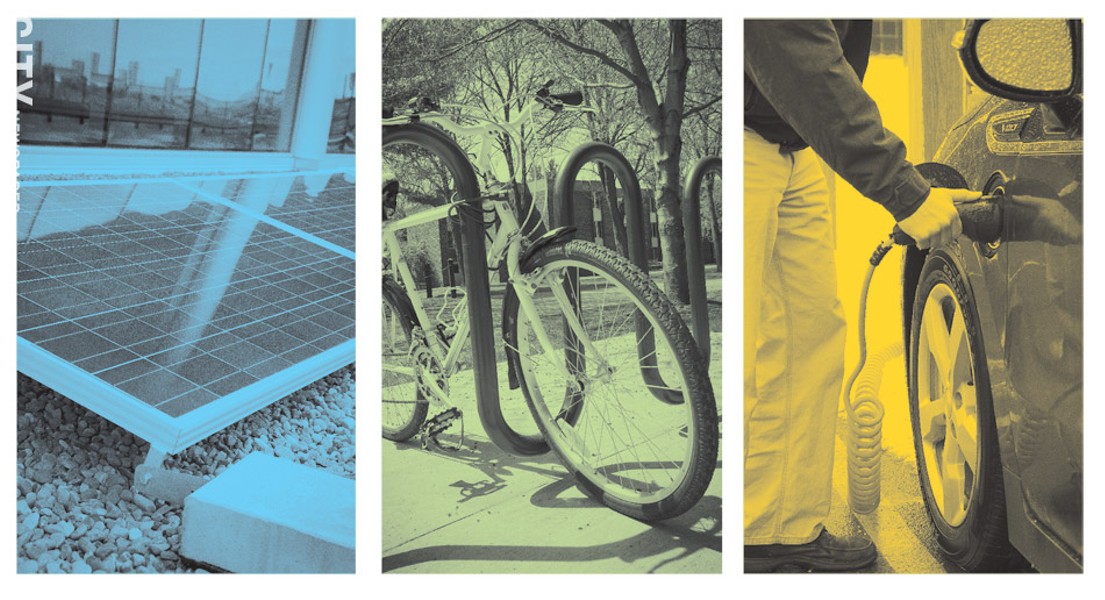 This year has been one long string of bad news for the climate. Atmospheric carbon dioxide levels passed an undesirable threshold, arctic sea ice melted at record levels, average global temperature records were repeatedly beaten, and a quarter of the Great Barrier Reef's coral died during a massive bleaching event.

This is what manmade climate change looks like, and across the world, communities and countries are asking how they can fight it.

The City of Rochester's answer is its recently released Climate Action Plan. The document sets a goal of reducing citywide greenhouse gas emissions 40 percent by 2030 and provides a blueprint to get there. Officials are taking comment on the plan right now, and expect it'll go to City Council for a vote within the next few months.

"I think that the city should be just commended for a really broad plan that has a lot of parts, that really is a good road map of how we can get to a cleaner community in the future," says Scott Oliver, deputy for energy programs at PathStone, a housing nonprofit that coordinates some government energy efficiency and renewables incentive programs locally.

The City of Rochester is already making emissions reduction efforts, and the plan builds on those. The city is installing electric vehicle charging stations for public use in parking garages and at places such as the Public Market; it's working through a plan to make city streets friendlier to cyclists. And officials solicited a developer to build a big solar array on a closed city landfill, from which the city will buy electricity.

But officials put the plan together because they see climate action as a way to create jobs, boost the city's economy, improve air quality and public health, reduce energy costs, and ensure the city's vibrancy. And they want to get the city's residents and businesses to act, too.

The plan suggests ways to make owner-occupied and rental residences more energy efficient, to get people to install solar panels and other renewable energy systems, and to get residents to cut down on natural gas consumption, possibly by switching to electric heating systems and appliances. It also recommends that the city partner with Rochester-Genesee Regional Transportation Authority to improve bus systems and boost ridership.

Much of the plan centers on voluntary efforts, however, which concerns members of the Rochester People's Climate Coalition, says Abigail McHugh Grifa, a member of the organization's leadership team. For example, commercial building owners are unlikely to voluntarily report their buildings' energy use, she says.

"Certainly, it would have more teeth, it would go further, and it would be more impactful if it were mandatory," she says.

The People's Climate Coalition is generally happy with the plan, however. The group is proud of the city for stepping up and making climate action a priority. And it wants to work with city officials to implement the recommendations, McHugh-Grifa says.

A citywide greenhouse gas inventory is at the center of the Climate Action Plan. The city identified various sources, calculated their annual emissions, and then eliminated things such as large emitters and airplanes, which it couldn't really impact.

The city calculated that:

• Natural gas use accounts for 51 percent of citywide emissions;

• Electricity is responsible for 22 percent;

• Water and wastewater systems are responsible for less than 1 percent.

Citywide emissions decreased 8 percent between 2010 and 2014, according to the plan. The city's electricity supply became cleaner over that timeframe, which was a major factor in the emissions drop. Decreases in vehicle emissions were another factor.

The plan points to a major step that the city could take to further clean up its electric supply: Community Choice Aggregation. Earlier this year, the state eased requirements for local governments to buy and provide electricity for residents and small businesses.

RPCC and PathStone's Oliver are excited about the possibility, and the city is working with some Monroe County towns to investigate the concept; the city could pursue Community Choice Aggregation on its own, or in partnership with other governments.

The approach would, in all likelihood, save residents and businesses money, since the city would buy power in bulk. But it would also be a way to secure low-carbon and renewable electricity for its power users. That combo would benefit affluent and low-income residents alike.

"It's a way for the city to support renewable energy in a way they're currently not able to support," Oliver says

Equity is a big theme in the plan. The energy efficiency programs that PathStone coordinates are accessible to property owners, not renters. And incentives for things such as rooftop solar power systems generally benefit more affluent homeowners who can afford the upfront costs.

Renters have far less control over energy-saving improvements that would also slash their utility bills.

But rental property owners do have access to incentives for such improvements. For example, landlords can get substantial grants and low-interest loans for replacing old furnaces with new high-efficiency units, Oliver says.

The Climate Action Plan recommends that the city and organizations such as PathStone reach out to rental property owners — and to tenants, who can influence their landlords — to increase awareness of efficiency programs.

The plan also raises the possibility that the city could tie energy efficiency to periodic certificate of occupancy renewals, just as it does with lead paint testing. But city officials say that code enforcement's heavy workload might make that impractical.

The plan also recommends that the city boost urban agriculture, provide easy pedestrian and bicycle access to bus stops, and ensure that climate actions are consistent with the work of the Rochester-Monroe Anti-Poverty Initiative.

Many other cities and communities around the county are developing or have developed climate action plans, including Raleigh, North Carolina; Knoxville, Tennessee; Fort Collins, Colorado; Phoenix, Arizona; and Portland, Oregon.

Local climate action is arguably more important now than it has ever been. President Barack Obama made some aggressive efforts to curb US greenhouse gas emissions and to implement anti-climate change regulations.

But President-elect Donald Trump has vowed to gut, cripple, or eliminate federal climate programs, end the "war on coal," and pull the US out of the Paris accord, which has just gone into effect.

The Trump White House and the GOP-controlled Congress will be no friend to the climate. That means individuals, towns, villages, cities, counties, and states will have to take the lead on cutting climate-altering emissions.

Citizens will have to press their governments for climate-friendly policies and programs and will have to show elected officials that acting on climate isn't a political liability.

Rochesterians have that opportunity right now with the Climate Action Plan.

"People need to get involved in this process and speak up and let the city know what the priorities should be, what they need to be," RPCC's McHugh-Grifa says. "Because if the community is not involved, these decisions will be made by someone else who's not necessarily living there and is not affected on a day-to-day basis."