Rochester could just as well have been called Genesee River City, considering the essential role it has played in the region's history and economy. Even before the falls powered the city's many flour mills in the early 1800's, which made Rochester one of the country's first boomtowns, the river had been the lifeblood of the Seneca people for centuries.

Now city officials are looking to the Genesee River again, this time to unlock the future of downtown. Governor Andrew Cuomo announced last week that he's committing $50 million to an initiative that city officials are calling ROC the Riverway. Rochester at last may be poised to join cities around the country that have capitalized on their waterfront, arguably their most important natural asset, to revitalize their downtowns.

"We've known for years that we have to revitalize the river," says Mayor Lovely Warren's chief of staff, Alex Yudelson. Revitalizing the river was a central theme of a 2016 report from the urban planning think tank, the Rose Center for Public Leadership. But the value of a revitalized riverfront had been the refrain of a chorus of visiting mayors, urban planners, and consultants for decades. A small army of urban planning gurus from California to Tennessee have almost invariably looked at the river with a mix of awe and incredulousness – like, hey, Rochester, what are you waiting for? 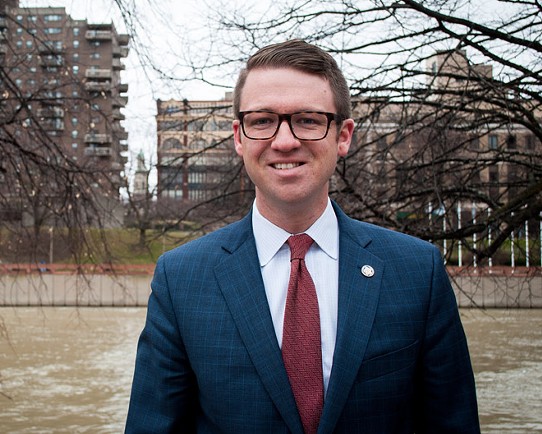 If we've been waiting for something transformative, ROC the Riverway just might be it. The initiative takes a comprehensive look at the city's riverfront potential and proposes nearly 30 interrelated projects designed to leverage the river's natural attraction and draw people downtown. If done right, these projects could become magnets for recreation, light retail, dining, arts, and education. A 12-person advisory panel led by the co-chairs of the Finger Lakes Regional Economic Development – Monroe Community College president Anne Kress and Chamber of Commerce CEO (and former Rochester mayor) Bob Duffy – is overseeing the initiative.

The panel will hold a series of public meetings to get community input. The first is this week: from 4 to 6 p.m. Thursday, March 8, at MCC's downtown campus, 321 State Street. The public can also post comments at www.cityofrochester.gov/roctheriverway/.


"We are compiling all of these projects in a sort of focused way, similar to the way the Buffalo Billion was used in part to revitalize that city's waterfront," Yudelson says. Don't look for a new high rise or much in the way of brick and mortar development, he says. "This is not about new developments. There are really only about four to five of these projects that are what you might call new mixed-use office and retail sites. But most of this, almost all of it, is about how to best use public space."

While there is almost always some skepticism about redevelopment, and its costs compared to its benefits, Yudelson says that ROC the Riverway has one overarching purpose. "The goal here is to bring vibrancy downtown," he says. "That's what it really boils down to: creating excitement."

Some of the excitement has already started with the redevelopment of much of Main Street, he says. For the first time in decades, downtown Rochester is seeing its population grow, and builders don't seem at all concerned about overdevelopment, he says.

But the river's potential hasn't begun to be tapped, he says. A vibrant riverfront will attract more people to live downtown and spur small business growth, he says. It will also reassure people who have already made the investment in downtown that they made the right move, that the area is only going to continue to grow and improve, he says.

Yudelson thinks that in the lead-up to Mayor Warren's re-election, many people thought she was concerned only with building a performing arts center on Parcel 5.

"And that wasn't the case," he says. "Her priorities have always been the economy and creating jobs. Revitalizing downtown has always been the goal, and the river is just an integral part of that. Sure, a performing arts center could bring thousands of people downtown, but there has to be more for them to experience once we get them here."

In that respect, ROC the Riverway is just a starting point, a first phase of the much broader Local Waterfront Revival Plan that was developed several years ago with the river, Lake Ontario, and portions of the Erie Canal in mind, says Yudelson. Mayor Warren sees ROC the Riverway as a catalyst, Yudelson says, something that will attract more private investment, similar to what's happened on Main Street with projects like Sibley Square.

ROC the Riverway should be seen as a potential $500 million project over 10 to 15 years, one that could ultimately have a major economic impact, Yudelson says.

Yudelson agrees that that's an optimistic figure: the "Cadillac" plan, as he calls it. The city is starting with the optimum, for the full plan and for its individual projects. As long as the initial plans are sound, the first $50 million in state funding is assured, and state officials say more could come later.

Nor will all of the money have to come from the city and the state. City officials anticipate partnerships with other governments and other sources.