April 06, 2020
Ben and Katie Morey, founders of The Submarine School of Music, knew that the month of March would be a time of transition. The married music educators had purchased a house on South Clinton Avenue in Brighton in February that had previously been a dentist’s office, with the intention of officially opening it to their students on May 1.

But that was before the coronavirus pandemic. By March 14, all public schools in Monroe County were closed indefinitely, and by March 22, all non-essential businesses in New York had been ordered to shut down their in-office operations and implement social distancing practices. 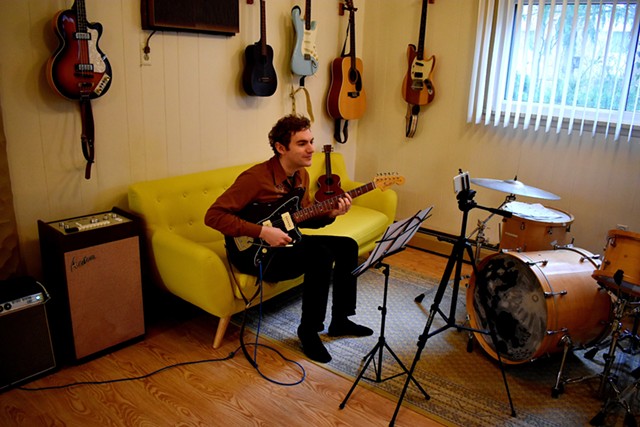 Like many private music teachers in Rochester, the Moreys, who had been teaching out of a classroom, were forced to move their one-on-one lessons into the virtual space of video conferencing and telecommunications apps such as Zoom, Skype, and Google Hangouts.

“My whole approach right now to teaching my lessons is that I just want to make it as bright a spot in my students’ lives as possible,” Ben Morey said. “I want to make music something that’s really fun, that they can use as a relief or as a way to even feel transported out of their situation, and as a stress reliever, and something that’s very personal that they can turn to, and provide some sort of levity or joy.”

Despite the initial challenge of settling into a set schedule with students on their preferred platforms, and working through the technical issue of lag time between connected devices during lessons, Katie Morey (who is also a contributing writer to CITY Newspaper) says learning music virtually is “second nature” to the kids she teaches.

Ben Morey sees benefits in video apps’ inherent inability to capture simultaneous music-making between student and teacher. “There is so much valuable instruction that you can give musically, even when you can’t play it together in real time,” he said. “You can demonstrate, and then you can observe. Sometimes when you’re just observing, you catch things that can help your student that you wouldn’t have noticed if you were playing along.”

For music teachers who work with student ensembles, however, the challenge can be tricky.

Rochester violinist and conductor Evan Meccarello, who teaches both disciplines at the Thames Valley Music School at Connecticut College and leads the Youth Symphony Orchestra there, also serves as the conductor of the Irondequoit Community Orchestra. While his ensembles cannot meet to rehearse, his conducting students have been unable to receive invaluable “live feedback” from the orchestra members, Meccarello said.

But Meccarello sees a silver lining in this educational context, too: The students have more time to focus on honing core musical skills such as rhythm, solfege melodies, harmonies, and form.

“Most of the conductor’s work happens before any conducting, any arm-waving ever occurs,” Meccarello said. “So this is actually, for my students, a great opportunity in some ways for more intensive individual study — and frankly, without some of the distractions of having to be in school for many hours a day.”

She had not taught private music lessons online before, but has been pleasantly surprised by the results, citing an increased level of engagement and attentiveness in her students.

One such flute student, Brighton fifth-grader Raeha Khazanchi, said that although she prefers in-person lessons, she’s had fewer distractions during the online sessions. “I really like it, and it’s really helped me calm down, and it’s good that something’s still happening even though we’re all stuck inside,” she said.

Her mother, Shal Khazanchi, is grateful for Raeha’s online lessons during the pandemic. “I think that one of the things that kept normalcy when the schools shut down was that she was able to continue with her music lessons,” Shal said.

While her students have improved their focus and productivity, Lentz has had to modify some of her approach and teaching methods to suit the online medium, which demands that she be equally engaged with her students.

For her individual lessons, which range from 30 to 90 minutes in length, Lentz said she now incorporates more “call and response,” breaks the instruction into shorter periods of time within the lesson, and focuses on being “clear and concise and to-the-point.” To that end, she sometimes holds up brightly colored signs with imperatives such as “POSTURE ALERT! Head up” and “AGAIN! Please.”

Lentz has also increased the frequency of “studio lessons,” in which a small group of students of similar ages participate in a joint session, playing passages for one another and giving feedback. “They need to know that they have a music community that, whatever age they are, they can share their music and get feedback from their friends also, and see each other and laugh together once a week,” Lentz said.

Before the pandemic, these studio classes would occur twice a year, in preparation for collaborative recitals each fall and spring. Now the studio lessons happen every Thursday. “Right now, we need even more social connection to each other,” Lentz said.

She also uses the Marco Polo video app with her students, which allows them to send short video recordings to which she can respond quickly. And while she primarily uses Zoom for one-on-one lessons, she is quick to point out that the app is far from a perfect solution. In order for Lentz to accurately assess tone quality, dynamics, and phrasing, she also has her students send audio recordings of their playing, separate from the lessons on Zoom.

Lentz is not the only music teacher who feels video app technology is currently incapable of effectively transmitting musicality.

“In the end what I’m teaching is how to craft a sound, whether that’s from a conductor or for an instrumentalist,” Meccarello says. “And if you can’t truly hear how the sound is being produced, over time, I think you may run into trouble.”

Providing online lessons to some students in the Rochester community is a challenge in and of itself.

Consider ROCmusic, an after-school and summertime program that provides tuition-free lessons to underserved students, many of whom do not have stable or quality internet access at home.

“The socioeconomic divide that is inherent in every community — regardless of the culture or racial or historical makeup of those communities — I think in times like this only becomes more heightened,” ROCmusic Director Armand Hall said.

“Because for us to continue to work with our students, that means they have to have stable enough internet service, whether that be through a cell phone or some data plan, or something in their homes,” he said. “They have to have received the information that we were sending out, and then to have the time and the capacity to connect with us, and then to continue to do it on a daily basis.”

“Learning to play an instrument is not learning music, and I worry that it’s going to be more difficult to play music,” he said. “We are missing our learning together, our creating together, the times in which we struggle and strive together, and succeed together — because we don’t have our ensembles and we don’t have that shared space in which we make this in. So we’re making do by increasing their instrumental skill, which is separate from music.”

Despite the limitations of social distancing, students are still connecting through community performance.

For instance, ROCmusic is hosting the first live-streaming performance in its virtual recital series, “Music Under Quarantine,” on April 15 via Facebook. In lieu of a community talent show that was to be held at the end of April at Lovin’ Cup, The Submarine School of Music will hold a “Family Band Challenge” throughout the month on Instagram and Facebook.

“I feel like after this, all of our students are going to have more of a personal relationship with their instrument,” Ben Morey said. “And maybe an attitude toward music as a personal pursuit, and not necessarily something that you do always with just a group, and an ensemble — that it’s something that’s for you, by yourself, too.”