Rochester Jazz Festival to return to downtown in 2022

By Rebecca Rafferty and Jeff Spevak 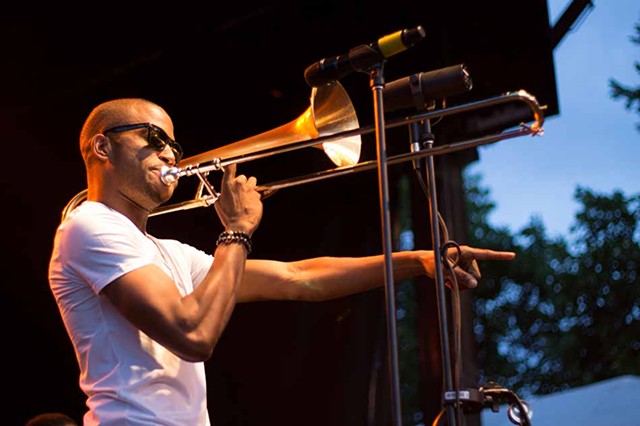 After a two-year, pandemic-induced gap, the CGI Rochester International Jazz Festival will return to downtown Rochester in 2022, festival producers announced on Friday.

“Nothing’s changed in my way of thinking,” co-promoter John Nugent said. “We’re going to try to bring our event back to where it was two years ago.”

The nine-day festival, which annually presents over 350 shows at more than 20 venues, and draws upwards of 200,000 people over the course of nine days, is scheduled to kick off on June 17, 2022. It will be the 19th edition of the event.

It has been an uncertain ride over the last two years. After canceling the festival in 2020 due to the pandemic, Nugent and co-producer Marc Iacona announced in February that the 2021 jazz fest would move from downtown Rochester to Henrietta, on the campus of Rochester Institute of Technology, to better adhere to state health guidelines.

News that the popular event would leave downtown was panned by fans, city officials, and downtown business owners, who said moving the festival would be an economic blow to downtown, particularly East End bars and restaurants that had come to depend on the event.

But in May, the producers reversed course on moving to the RIT campus, and said the jazz fest instead would be canceled for the second straight year. At that time, it set the new dates for June. But it was not immediately clear where the festival would be held.

Friday's announcement made it clear that next year's event will be held at its familiar downtown venues, with some limited changes.

“We’re all hoping things return to normal,” Nugent said. “I can’t tell you what’s going to go on in the next six months in terms of what’s in the air and how much it spreads. I’m not a scientist. Everybody in the entertainment industry is dealing with the exact same thing. And agents are trying to place their tours, artists want to get back to work.”

Much of next year’s festival, Nugent said, will be a matter of re-scheduling. Despite the uncertainty, he is already booking acts for the 2022 Club Pass Series, with musicians who were to play in the 2020 festival given priority.

“If you lost work a couple of years ago because it wasn’t your fault, you probably want to still have it, right?” Nugent said. “We’re offering every artist who was booked in 2020 first right of refusal. And most of them are re-scheduling.”

Nugent wants the festival to retain its strong international flavor. Yet touring acts, including the large number of Canadian and European musicians who play the festival every year, have different COVID hoops to jump through at each date.

“I’m hoping there will be artists from countries that are on the low level of COVID,” Nugent said, adding he has no control over pandemic guidelines. “The borders are what the borders are.”

While RIT is no longer in the festival’s plans, Iacona, who is in charge of booking venues, says the jazz fest is open to discussions about future expansion of the festival that could include the school. Among other possibilities being explored, he said, is holding events at Martin Luther King, Jr., Park at Manhattan Square.

Friday’s announcement said the 2022 Club Pass Series will feature 219 sets of music at 12 venues in downtown Rochester. Organizers have said that Club Pass tickets purchased for the cancelled 2021 event are valid for the 2022 festival or 2023 festival.

All plans are being laid with an eye on the pandemic uncertainty.

“Every state has got a different position on how people flow through their venues,” Nugent said. “In this state right now, it’s highly recommended you follow the New York State guidelines.

“Whether or not that changes between now and next June is anybody’s guess.”

The full lineup and details for the 2022 festival will be announced at the annual spring press conference in March.