Thursday night, on the first floor of the Sibley Building, off East Main St., the collection of shops and restaurants called Mercantile on Main was playing host to “Mocktails on Main,” an event built around mocktails. Cocktails, minus the alcohol.

In the midst of the familiar aquarium echo of malls, the Fringe was keeping the ground floor of the high-end atrium experience busy. An acoustic guitarist was playing Neil Young, Bob Dylan, and Dolly Parton (confirming “Jolene” is an amazing song).

Mercantile on Main has been staying open most nights until 8 p.m. That’s not really nightlife, but it’s a start. A row of tables was offering the designer mocktails.

If alcohol is called for, “You can get one over there,” said one of the women who was minding the mocktails tables, pointing across the way to the bar, La Bolla.

Meanwhile, on the third floor, the fresh-smelling Focus Theater was preparing for “Unleashed Improv! Other People’s Shows.”


‘Other People’s Shows,’ the easy way 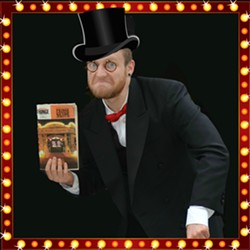 This is brilliant. The Rochester improv group Unleashed! Improv presents “Other People’s Shows,” as a way to sample Rochester Fringe Festival shows without actually going to the shows. And all for a mere $10. Alas, Unleashed! is limited to an hour, so there’s simply no way to present all of the acts at the 12-day festival.

So Unleashed! limits the samples to one show each from each of the half-dozen categories. Audience members shout out which show they want to see.

Unleashed! made the first shout-out. Cast members opened the show by wandering through the venue, unraveling balls of yarn around audience members. This was a tribute to a social collaboration experiment from earlier in the week, “C’est Pas Là, C’est Par Là,” where the audience was asked to collect string that had been strung around posts in the parking lot at City Blue Imaging on Scio Street.

What’s it all mean? “We are both the puppet and the marionette,” was the message from Unleashed!

From there, the Unleashed! audience directed the group to give it Theater, and the music and comedy of “My Evil Twin.” Unlike the actual show, in which the twins are both men, Unleashed! re-gendered the idea, with the twins played by a man and a woman.

This is improv, a big part of the Rochester Fringe Festival. Quick-witted comedy troupes responding to the moment.

So for Music, the audience asked for “Pop Goes the Bells,” Sandy Gianinny’s concert on the Third Presbyterian Church’s chimes. The ensemble, including a hunchback, offered church bell interpretations of Lady Gaga’s “Pokerface” and Madonna’s “Like a Virgin.”

For the Spoken Word category, the audience called for a new version of “Rochester Conspiracies: The Innerloop Podcast LIVE!” There, the main concern was: What’s in George Eastman’s basement? “It’s just a bunch of dead animal skins.”

Choosing from the Multidisciplinary category, Unleashed! was tasked with the mentalist ExperiMENTAL. That was easy: “I’m feeling that there is someone in the room with change in their pocket.”

With Kids’ Fringe, “The Worst Scientist” was an awkward suggestion as to where the scientist could put his beaker. Visual Art and Film’s “Moko Jumbie” led to the formation of a “sea glass and badminton league.”

And Comedy, of course, wrote its own comedy. “Bronco Brad Dang Tootin’ Good Time Show” and its promise to deliver “a flying liver spaceship.”

“Unleashed Improv! Other People’s Shows” returns for a 6 p.m. Saturday show at The Focus Theater. 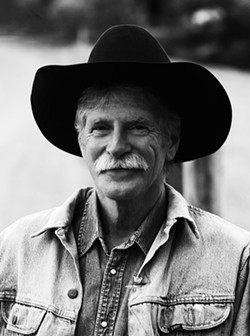 “Anybody here know anything about mules?” Jeff Mamett asked his audience at The Theater at Innovation Square.

So Mamett was here to larn us about ’em.

The Rochester Fringe Festival catalog compared Mamett to John Prine and Guy Clark. And yes, we could stop right there. Except, there was a whole lot more cowboy beneath that cowboy lid, Sam Elliott looks, and slight, easygoing twang from the Texas Panhandle.

And cowgirls. “Cowgirls don’t get a lot of attention,” he said. “You don’t hear too much about cowgirls, but they’re out there, I’m here to tell you.” There’s romance in a cowboy’s heart. Yet when you’re separated from the one you love, you’re both still under “the same old moon.”

Cowboys are sentimental. Mamett sang about wanting to go to cowboy heaven when he dies, with angels bearing fiddles and guitars.

And he sang about a cowboy welcomed to heaven by his favorite horse. That was a genuine tearjerker. “Alright,” Mamett said, “put your handkerchiefs away.”

Mamett is back for an 8 p.m. Friday show at The Theater at Innovation Square.