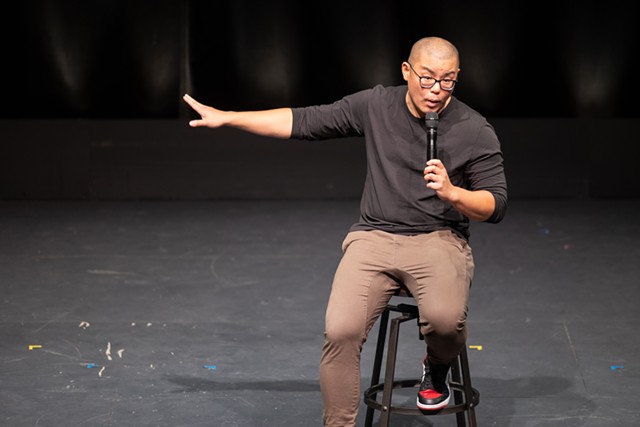 Without pausing for a breath, comedian Stupid Ed thanks the audience and tech crew and then launches into his one-hour stand-up routine with a harsh but loving description of his family. As he says, “It’s good to be around anxiety.”

Aside from a few too many penis jokes, Stupid Ed rarely lives up to his name. If anything, he’s Speedy Ed, racing through anecdotes about his eye surgeon brother, needy chihuahuas, and superiorly competent wife. Nothing is off the table: not mental health, nor herpes, nor stereotypes about his stoic Asian family. As a Taiwanese-Canadian, he professes his indifference to Shang-chi, Marvel’s first Asian superhero. “I want to see a TV show about a homeless Asian hockey player. She fails and after, she calls her parents and talks about her feelings. That’s a fantasy!”

Stupid Ed’s nickname comes from a commitment to owning his faults, which he encourages audiences to do as well. As he meanders through family anecdotes and observations about racism, he threads in feel-good platitudes and generic advice, like “We’re all the same” and “Hate is not an emotion, it’s a choice.” Any potential cheesiness is undercut with frequent innuendo and references to bodily functions, a careful balance of saccharine optimism with vulgar irreverence.

The audience Saturday night was small but appreciative. If one joke didn’t land, well, there were three more ready to tumble out.

One of the joys of Fringe is the showcasing of original new art, especially by local writers. “Inner Loops” highlights eight playwrights in an evening of monologues related to Rochester, a theme inspired by Sejal Shah’s essay collection “This Is One Way to Dance: Essays on Race, Place, and Belonging,” which contains the meditation on her childhood home that kicks off the show.

The evening starts with ranch houses and ends with the universe, but the monologues between are carefully ordered so each flows naturally to the next. Eight monologues in a row could easily feel stagnant, but Jeremy Sarachan’s direction ensures each piece has a dynamic stage picture, as the ensemble helps create each scene, whether they’re lined up for the water slide at Seabreeze or waiting for the bus.

The technical design is simple but effective. The costumes reinforce the scene, such as Penny Sterling’s skirt with bicycles as she describes riding up and down Cobb’s Hill in “Five Degrees.” A cellist and banjo player provide transition music, and the lighting helps set the mood, going dim to portray a tunnel or flashing during a séance.

Overall, the production casts Rochester in a warm but rather superficial light. None of the “Inner Loops” monologues discuss the actual Inner Loops, the highway constructed about 60 years ago that cut through Black and low-income neighborhoods. In Sejal Shah’s “Pelham Road,” Rochester is a place to leave, but also a place to return to: “I could always come back.” In “Daisy Horne” by Laura Thomas, a woman grieving the loss of her baby finds the strength to leave an abusive husband and views Rochester as a promising fresh start.

Several monologues portray moments that just happen to be set in Rochester, ranging from a young artist’s exuberant graffiti to a middle-aged woman’s coming out. Swap out Pinnacle Hill or the Strasenburgh Planetarium for any other city’s equivalent attractions, and the monologues wouldn’t change much. The messy contradictions of the highly racially segregated home of Frederick Douglass go unexplored, and so does the history and energy that make Rochester unique.