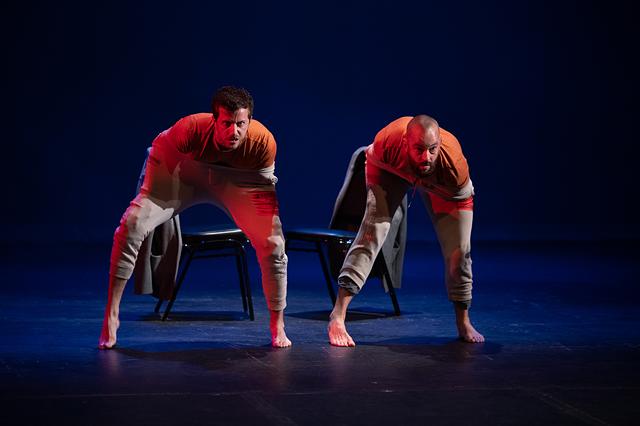 “Generic Male: Just What We Need, Another Show About Men” is a slight re-tooling of the show that PUSH presented at last year’s Rochester Fringe Festival. Wednesday night at the CenterStage Theatre at JCC’s Hart Theater, it was clear that the Rochester theater group had successfully fine-tuned an already fine hour.

After marinating through a handful of gigs, including winning the International Fringe Encore Series Award from New York City’s SoHo Playhouse, “Generic Male” will soon be off to an Off-Broadway run, likely at the end of the year, and into January.

Closer to home, “Generic Male” gets another Fringe viewing at 8:15 p.m. Saturday.

While a stage manager is a slight presence, for this show PUSH has been pared down to what is essentially a two-man show: Founding Artistic Co-Director Darren Stevenson and Creative Director Ashley Jones.

Oh, and you, the audience member, are an uncredited character. “Generic Male” repeatedly breaks down that fourth wall between performer and audience.

PUSH’s idea of dance is different than that of most companies. It is dance as interpretive furniture. And PUSH deals in excellent comedic timing and poignant storytelling. “Generic Male” is episodic. A father mimes the story of his son’s life, from a kid playing baseball, all-too soon he’s a soldier throwing hand grenades and stabbing an enemy with a bayonet. And the audience senses this will not end well.

The mood shifts, sometimes abruptly, from scene to scene. There is humor: “Rochester, the city that killed Kodak,” Stevenson says. There are physical gags: an Agent 007 briefcase dance, and a new kind of Russian Roulette.

But it soon becomes clear that “Generic Male” isn’t about jokes. Stevenson and Jones sit at the front of the stage and watch a video — unbelievable, but it is real — of a minister delivering a sermon against limp-wrist “queers” in skinny jeans, thundering “I’ll bet you a million dollars Adam had a pair of pants.”

A frank talk on sex between father and son unfolds as a session of acrobatic movement, with close contact between two men that challenges the audience. When we watch them hug awkwardly, we’re watching growth.

This is a show where two characters shed society’s constraints and dance with each other. Yet not in a suggestive manner, not in a sexual way.

“Generic Male” is presenting something profound that, judging by the audience’s standing ovation, we’re ready for.


St. Joseph’s tells a story that no longer speaks for itself

What a curious sight this must have been, as motorists drove down Pleasant Street, and this seemingly misplaced square of a park. Dancers, hugging the foundation of a gothic ruin that drivers never glance at twice, even if they’ve driven past it 100 times. The dancers run their hands over the rough brick of St. Joseph’s Church, fingers tracing layers of stone and history, and lay their heads against its ruins, as if listening. As in, “If These Walls Could Speak…”

Where there were once windows are now vast gaps, staring like empty eyes. Trees surround the building, and grow inside its roofless interior as well. Shrubs, pachysandra and hostas live here. What appears to be two homeless people are sleeping on the lawn. In the midst of the city, this is a safe place for squirrels, their chatter accompanying the mournful trio of musicians. The accordionist, Greg Woodsbie, sings — quietly — vocalizations he’s making up, which fit the somber mood.

“If These Walls Could Speak…” tells the story of this physical church structure. With narration written by the event’s choreographer, Natalia Lisina. She and others speak of this stillness stuck in the midst of movement. Clouds, swaying tree branches, cars.

This church first welcomed worshipers in 1846, and in a few years had grown to three and a half stories tall, with a bell tower. An orphanage became a part of it. It was the city’s most visible landmark, seating 1,000 people. George Eastman set his watch to the clock in the tower. And when the clock stopped working, he paid to have it repaired.

The three bells in the tower also served as a fire alarm. How ironic, it was noted. In 1976, the building was destroyed in a fire. The dancers move frantically as the audience imagines the fire. One of the dancers lies face down by the side of the building, covered in a red shroud, a representation of the dead.

The band plays an old but familiar hymn, “Jerusalem.” This is, as Lisina recites quietly, “The past swallowed up by time and nature. And the present is whatever is left.”