A gospel cleansing, Thomas Warfield, and a fiery performance at Rochester Fringe 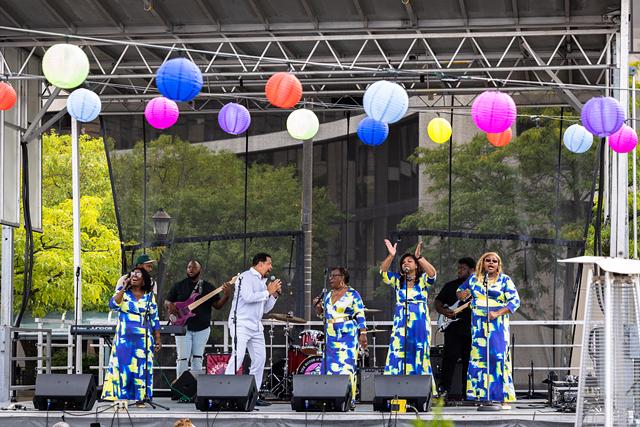 At the halfway point of the Rochester Fringe Festival — following nights of murder, ghosts, Shakespearean sexual identity crises, unnerving exposure to radium, and men wearing imitation leopard-skin skivvies — what was needed on Sunday afternoon was a good-old gospel cleansing.

Rochester’s gospel scene has made itself heard for more than a century. And the big, full voices of Gospel Sunday have been a presence at Rochester Fringe for the past decade. The aim of the event on this hot-as-hell afternoon in the Spiegelgarden, as the voices boomed down E. Main Street in this unfamiliar setting, was to stir the crowd that sleeps in on Sunday morning.

So the crowd gathered, just yards away from the previous evening’s debauchery of Cirque du Fringe, to be “just thankful for waking up,” as Rev. Melvin Cross said. Life, joy, strength, and peace of mind. And singing a message of Jesus Christ: “When I’m in trouble, he can’t lead us wrong.”

It’s music that you feel. Is that your beating heart…or the bass shaking your breastbone?

Most Rochester Fringe acts can recite the history of the universe in 55 minutes. But in honoring a leading bon vivant of the city, “Thomas Warfield’s 60th Birthday Celebration with Music, Movement and the Metaverse” needed a full 90 minutes to cover its subject. It’s been that kind of life. So far.

This was a Sunday afternoon birthday party at a nicely filled Little Theatre. Warfield, a dance professor at Rochester Institute of Technology, and an omnipresent city scenester, can drop bon mots like a guy sitting in the park tossing sunflower seeds to pigeons. He tells of the time he was performing in New York City, where he lived for a while. Tony Bennett came up to him after a show and said, “You are really good.”

I’d tell that story every chance I got. Wouldn’t you?

New York City aside, and Paris to Mongolia aside, Warfield is a Rochester guy. He tells stories of playing piano upstairs in the old Tara Lounge, the gay bar which today is the music venue Abilene Bar & Lounge. Sunday afternoon, he brought out longtime friends to sing feel-good tunes with him, and tell stories about going to Madison Square Garden to cry through a Barbra Streisand concert.

His music is sweet and light, but that leaves the door open for poignancy. Leonard Bernstein? Well, of course the two connected for lunch one day. There, Warfield says, the legendary composer and conductor told him, “You have to connect to art, that’s your responsibility.” Because, Bernstein said, art moves society forward.

A life lesson: “Give people a little slack,” Warfield said to The Little audience, then paused, before continuing. “I was going to say, ‘In case they’re Republican.’” Judging from the audience reaction, this was largely a crowd of Democrats.

Warfield said for years he had been playing with the idea of singing “Old Man River,” a song best associated with his uncle, the actor and deep baritone William Warfield. Not a deep baritone himself, Warfield said, “My mother said, ‘I don’t think you should sing that.’”

But he did on this afternoon. With an upbeat, hip-swinging style very, very far from his uncle.

If Warfield is of the metaverse, in a virtual world of his own, it is a well-grounded one. After 60 years, he spoke of the importance of making connections with people. “It enhances us,” he said. “It makes the joy come out of us.” 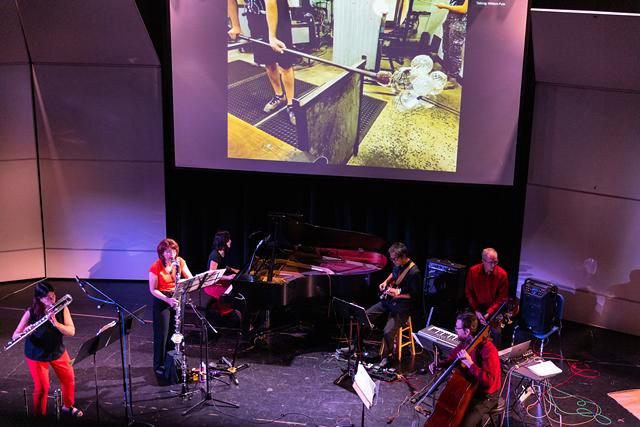 “More Fire” was an ambitious piece of art timing. The audience watched a video screen set up at the back of The Theater at Innovation Square stage as a camera prowled the floor in real time at More Fire Glass Studio, just off of Monroe Avenue, where the staff was firing glass globes for a new sculpture.

Also in real time was the avant-garde Rochester ensemble fivebyfive, playing at the front of The Theater at Innovation Square stage. So while the audience kept a watchful eye on the screen behind the band, and the activity at More Fire, it was also watching and listening to the band. And after 60 minutes these two arts, glass blowing and music, separated by a few miles and a few techniques, were supposed to arrive at the same place, together.

Perhaps it was a happy accident that one of the pieces performed by fivebyfive for this curious experiment was Glass. “Thin Blue Line” by Philip Glass, the minimalist composer.

Interpreting the music of living composers creating modern music is the mission of fivebyfive. The concert opened with the gentle, foghorn notes of Brittany Green’s “Lead Me Home,” while behind the band were projected images of the More Fire crew inserting into a kiln globs (that’s a technical term) of glass affixed to the ends of poles, to be heated until the glass was pliable enough to be added to a growing sculpture of small white globes.

So Haeyeun Jeun’s gentle, almost fragile piano was a perfect opening. Soon fivebyfive was a gentle storm of Laura Lentz on flute, Marcy Bacon on clarinet, Ken Luk on electric guitar, Eric J. Polenik on bass and Marc Webster, who added programmed audio that felt like the burbling echo of water on cave walls.

“It might be a little noisy,” More Fire Glass Studio owner Elizabeth Lyons warned as she reported via video on the progress at the studio. And yes, propane torches can be loud.

Glass — that’s Philip Glass — is clearly an influence on fivebyfive, as evidenced by its predilections for oscillating rhythms, repetition, and chamber atmospherics. And as the hour wore on, it became clear that this was a race to the end between More Fire and fivebyfive. The tension mounted and…

It was a tie. Lyons eased the completed glass piece into an insulated box to cure as fivebyfive brought Mark Mellits’s rambunctious “Dreadlocked” to a close. Then the audience was invited to the sidewalk outside the theater. To smash glass.

Sugar glass, actually. Which would soon disappear with the evening’s rain, or perhaps to be carried away by ants.