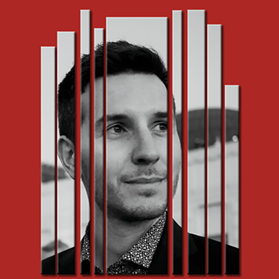 Before “ExperiMENTAL” begins, you already feel like you could be put on the spot at any moment. The room at School of the Arts is intimate and dimly lit, with chairs set up at small tables. There’s no place to hide.

Steven Nicholas debuted this mentalist show at Orlando Fringe in 2021 and since then has been performing at fringe festivals across the country. A mentalist show is similar to a magic show, but the spectacle is related to the mind: memorization, knowing what an audience member wrote on a nametag, drawing a sketch of a stranger’s memory. He doesn’t ask you to pick a card. Instead, he picks a card and leads four audience members into correctly guessing it.

“I couldn’t remember anything,” he begins the show, sharing a childhood memory of struggling with timed tests because he couldn’t memorize the multiplication tables. This leads into his first “warm-up” trick, in which he demonstrates his knowledge of pi, the mathematical constant of never-ending digits. He asks, “Let’s see, who’s avoiding eye contact?” when picking his first audience participant of the night, a man in the front row whom he assures won’t have to do anything embarrassing. Nicholas hands him a book that consists entirely of the digits of pi, and glasses to help him read it.

Nicholas first recalls the digits of pi selected from the top of a randomly selected page. Not impressed? Next he asks the audience member to pick five random digits from the book, and he recalls the digits that follow. Still not impressed? Now he helps the audience member find a part of pi with a sequence of numbers that are important to him. The audience member squints into the middle of the page and reads out his birthday
.
The hour-long show continues with similarly impressive and carefully constructed acts, performed with nothing but quiet charisma and simple props: cards, a folder, a dictionary, a sketchbook. Many of these become tokens for the audience who participated to take home.

Wearing jeans and a black tee shirt, Nicholas’s stage presence is casual and understated. He’s quick to banter and ad lib. Even when he acts as though he’s struggling to identify an audience member’s name, you get the sense he’s always in complete control. His biggest strength is his ability to direct attention toward the participating audience members. Strangers get called to the stage, unrehearsed and spontaneous. Under his calm but commanding leadership, their nervousness, amusement, and shock become compelling theater.

This might not be the right show for someone with a fear of audience participation. Nicholas makes eye contact with everyone. He watches you as much as you’re watching him, if not more.

For me, the scariest moment of the show happens when an audience member flips to a page in George Orwell’s “1984” and sees the word “possessed.” A moment later, when she tries to flip to the page again, it’s ripped out. How terrifying to not be able to trust your own memory.

“ExperiMENTAL” is a fun show of delightfully impossible reveals and masterfully executed mind tricks. At least, that’s what I remember.