Rochester Fringe Festival was back in full effect this year 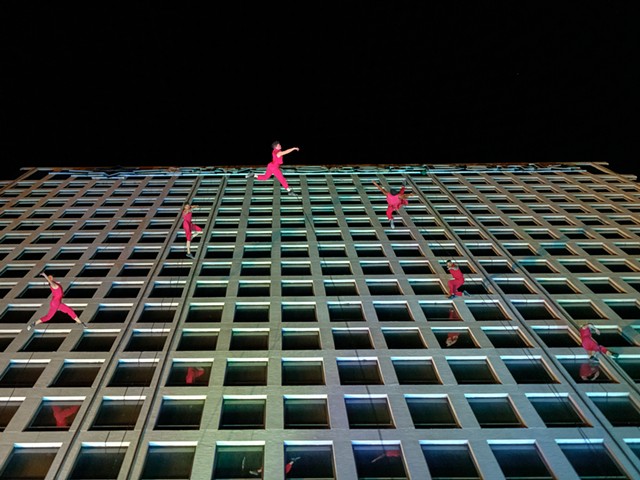 The big question for the 11th Rochester Fringe Festival has been: How do you put this thing back together after a pandemic devastated the entire entertainment industry?

As the 12-day festival drew to a close Saturday night, the little kids didn’t seem to be too worried. Early in the afternoon, they were swarming the Spiegelgarden at the intersection of Gibbs and E. Main streets, the center of Fringe society, scribbling with fat chalk pieces on the pavement and dancing to disco. Training, perhaps, for futures in vandalism and unfortunate fashion choices.

Over the last three years, Rochester Fringe Producer Erica Fee has had to make serious choices as well. Two years ago, as COVID took hold of the world, the festival was presented online. Last year, it was part live, part virtual. Big crowds were still seen as a health hazard.

“This is the first big year we’ve had since the pandemic began,” Fee said Saturday afternoon, as the little kids bopped to The Beastie Boys’ call, “You gotta fight, for your right, to party.”

“This year what is different was that we were able to have our two big weekend events, and that was allowed,” Fee said. “So we had The Flying Españas, of course. We had the incredible show “C’est Pas Là, C’est Par Là” too, which was another free outdoor event.”

The Flying Españas, an act that originated in Mexico City, filled downtown Rochester’s Parcel 5 with trapeze swingers and motorcycle high-wire devilry. And “C’est Pas Là, C’est Par Là,” a French group, created by a South Korean visual artist, asked its audience to follow thousands of yards of string, wind it into balls...and set them on fire.

“When we started off trying to find groups like this,” Fee said, “I even Googled ‘Large spectacle shows,’ and, ‘Is there a list? Is there a guide book anywhere? Is there a conference I can go to?’ And there are none of those things. So much of this is through word of mouth. And just doing the leg work.”

Even the leg work wasn’t paying off at first.

Bandaloop. Based out of Oakland, Calif., the group performed at the first two Rochester Fringes, before returning this year. Bandaloop used ropes to descend from the roof of the 21-story Five Star Bank building, dancing on the façade in four spectacular free shows on Friday and Saturday, watched by thousands of people in Dr. Martin Luther King, Jr., Memorial Park.

“There are no other Fringe Festivals in the world that are bringing in these big free, spectacle-type performances, aside from us,” said Fee, who was at first uncertain that she could create a Fringe Festival out of aerialists dangling from the side of a building.

“And then I thought about it: Actually, no one here actually knows what a Fringe Festival is anyway. So it doesn’t actually matter. We can make our own definition. So we did. And now, people actually refer to us as ‘The Rochester Model.’” 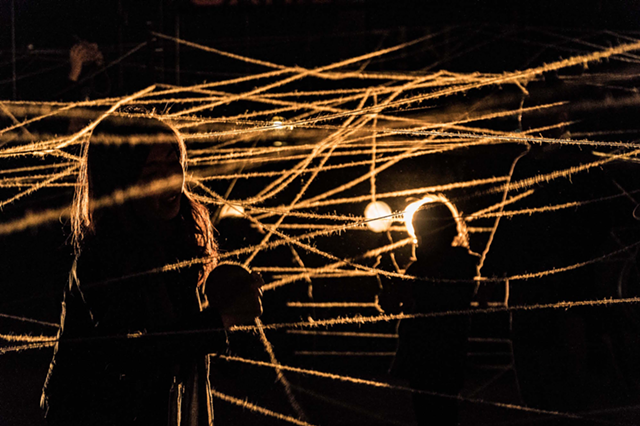 But Rochester Fringe is also about the little guy.

“There’s a balance at the festival, between small and large,” Fee said. “And, there’s a lot of thought that goes into, ‘OK, if we have a large show, then we can draw people down, and it filters to the smaller shows.’ There’s a whole psychology behind that, that hopefully we get right.”

In fact, the Rochester Fringe was largely smaller shows such as, “When the Souls Rise.” Not really a small show, as it turned out. This week, it drew more than 300 people to Mount Hope Cemetery. In the rain.

Rochester Fringe has persevered through the pandemic.

“There was never any question that we wouldn’t keep on going,” Fee said. “Has it been challenging? Yes. Was there an enormous amount of price gouging? This year, yes. And we’ve tried to navigate around that.”

“I will say we have definitely, definitely exceeded our 2021 attendance.”

But there’s no denying that entertainment has been a victim of COVID.

“The performing arts nationwide, the sales is down 50 percent for performing arts,” Fee said. “People are attending a lot of outdoor shows, but the indoors is still suffering. The Edinburgh Fringe this year, sales were down 25 percent this year. And so everyone is still not back to normal. Whatever that was.”

Back to normal? What is normal for a Fringe Festival? Here’s more of the comprehensive report you have counted on for news on ghosts, singing cowboys and drag queens at the Rochester Fringe Festival.

There are moments — which proved to be rare among the group onstage for “Catharsis Time” — when our frailties can actually win a battle. As in Luanne Davis Haggerty’s battle with a bat that had gotten into her apartment, just hours after she moved to Rochester. She managed to eject the creature, but it was the way she told the story that stood out. A principal lecturer at the National Technical Institute for the Deaf, Department for Performing Arts, Haggerty delivered her story in American Sign Language to her pre-recorded audio track.

So Haggerty came out on top in that bat battle. And for much of the rest of the cast of “Catharsis Time,” a Saturday evening of often embarrassing confessions at the Multi-use Community Cultural Center on Atlantic Avenue? Not so much.

These were true stories. Stuff you couldn’t make up. Stuff that makes an audience ask: “Why would you even tell anyone this story?”

Why would anyone want them repeated by a reporter?

Well, because many of these nine people are connected to the local comedy scene. Or some kind of self-esteem self-flagellation group. That’s just what they do.

Tricia Campbell relived the awkwardness of writing in a high-school classmate’s yearbook, especially when it came to Dan, who she had a crush on. Her desires went unfulfilled. She ran into Dan a few years later and, “he introduced me to his new boyfriend,” Campbell said. “I found that meaningful.”

Kaleb Colosimo confessed to growing up in a Christian Conservative environment and didn’t have his first sexual experience until he was 20 years old. It did not go well, and was punctuated by a cop showing up at the door. “Don’t have sex,” Colosimo warned. “Bad things will happen.”

Joanne Brokaw went back to when she was 14 years old, and her cousin’s boyfriend asked if she wanted to learn how to drive his car. Of course, she did. Forty-five years later, Brokaw asked if anyone in the audience knew if there was a statute of limitations on slowly driving into the back of a Kentucky Fried Chicken restaurant, damaging the rear door, and beating it before anyone came out to see what had happened.

Colleen Denny had the classic teenage-girl experience of spending a little time at an Ithaca waterfall with a handsome older guy, only to see in horror that the water was turning red. Yes, her period.

Patty Farneth insists she was a good kid, but there was some smoking of what she euphemistically referred to in the ’70s as “oregano.” But times are changing since she was in college and getting busted by her dad. Legalization is at hand. “And by next year,” she said, “we hope to visit oregano shops right here in Rochester.”

The performance also coincidentally featured two colleagues of mine at WXXI. Lisa Stein-Fybush told of visiting France as a young woman and throwing up during dinner at the home of her host family. Her husband, Scott Fybush, took the way-back machine to when he was 10 years old at summer camp, writing pathetic letters to his parents “expressing my grief.” But two years later, he was a convert. Saturday night, he was reading some of his old postcards he had written to his dog, and his requests that his parents send him “the new issue of ‘Scientific American.’” He got the magazines. The dog never wrote back.

Penny Sterling, a well-known transgender performer in the area, knows how to tell a story on several levels. She described the period of transition in her life, alongside a friend who was on the same journey, and how they were exchanging photos of each other in women’s clothing. Until Sterling accidentally texted one of her photos to the wrong person, a woman named Carson.

“I’m transgender,” she confessed to her. “Let’s go shopping!” she replied. They became fast friends. Until, in the most poignant moment of the evening, Sterling told the audience she had died. In her grief, and in the midst of her transition and choosing a new name, Sterling needed a middle name. Few knew until Saturday night that she is actually Penny Carson Sterling.