September 21, 2020
COVID-19 forced the KeyBank Rochester Fringe Festival to reimagine its event for 2020, leaving organizers with the dilemma of how to present its annual selection of multi-genre arts performances at a time when live, in-person gatherings aren’t allowed.

The resulting virtual Rochester Fringe Festival makes for an interesting compromise: Audiences still get the benefit of seeing some of those performances, albeit through a screen, while seated in their own homes. It’s an opportunity I’m grateful for, even if I can’t help missing the communal experience and spontaneous nature of the arts performed live.

Going virtual also adds an interesting element to the reviewing of Rochester Fringe events. Typically audiences would never get to watch the exact same performance twice. Now, with about half of the festival’s events being pre-recorded, it means that the performance being reviewed is guaranteed to be identical to the one any future viewers will experience. So you know exactly what you’re gonna get, which is handy. 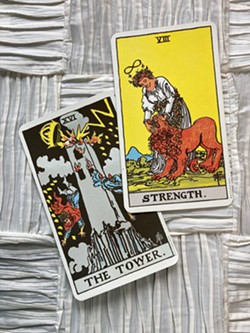 This weekend I had the chance to catch “Disturbances a Deux,” a spoken-word work from visual artist and playwright Martha Schermerhorn, which the festival program guide describes as “a peek into the shadows and the corners of existence, where the unexplained and occult intersect with our ordinary lives.”

The performance consists of two tales, running roughly 20 minutes in total. The first, “Looking for X,” uses tarot cards as signposts on a journey into Schermerhorn’s (or rather the narrator’s) recollections of her father, his interest with the paranormal, and the ways in which he passed those fascinations on to her.

The second is called “Stage Sprite,” and is told from the point-of-view of a theater dresser — or wardrobe attendant — who describes the experience of working backstage. She focuses on the hidden culture and superstitions of theater folk, shaking loose the ghosts and spirits that haunt the darkness behind the stage curtains.

An opening title card informs the viewer that the production was intended for the stage, but has been adapted for pandemic-era production and viewing. Admittedly, I don’t have much of a point of comparison, but the transition feels smooth.

Each story is told in voiceover by a single performer, with music and accompanying video imagery to illustrate Schermerhorn’s written words. As someone with a deep and abiding love of the mysterious and the supernatural (especially around this time of year) Schermerhorn’s ruminations were right up my alley.

“Disturbances a Deux” is currently available on demand at rochesterfringe.com and
can be viewed through the end of the festival. 13 and over. Free.