Rochester Fringe Festival, Day 2: BIODANCE, 'Black in the Box,' and 'we broke up'

by CITY News and WXXI News

Preview: Nature cuts in on BIODANCE

Life in Rochester means built-in obstacles to some of our arts. Cold winters, and snow, immediately come to mind.

“I designed this workshop to kind of get people outside and to notice what was out there in the winter, when we’re not paying attention to that. And so my thought for that was creating patterns in the snow, and things like that.

“There are things we can do. We have to keep brainstorming, I think.”

But the coronavirus pandemic is beyond making snow angels. For much of the arts, going virtual has been the only answer, as the KeyBank Rochester Fringe Festival is doing now, through September 26. And going virtual is also how Smith is keeping her BIODANCE troupe moving.

“Right now, we’re starting to figure out this virtual business, which is probably not my favorite, but is definitely a way to offer something. A way to continue to be together with the company.”

So the brainstorming has produced a show called “BIODANCE at Home.” Thirty minutes long, four separate dance pieces, two of which are new — including one by the group’s Russian-born dancer, Natalia Lisina.

The featured work in the show is “Red Pilgrimage,” based on words by the poet-activist Lauren K. Alleyne. The piece is about grieving. Yet, “I mean, I think it’s moving, but I don’t think it’s super sad,” Smith says. “I think it’s kind of a beautiful sad.”

Working with Alleyne herself and BIODANCE’s usual media engineer, W. Michelle Harris, the group’s dancers work solo in an outdoor setting: land near Keuka Lake, with abstract outdoor sculptures and buildings overtaken by weeds and the passage of time. A setting that dictates the dance.

“It’s part of the inspiration, no doubt,” Smith says. “I mean, I would say it’s the poem, and also the place, for sure. And then the people, right? The people I am working with, they bring themselves to it. So it’s not like I’m telling them each move to do. They’re all contributing.” 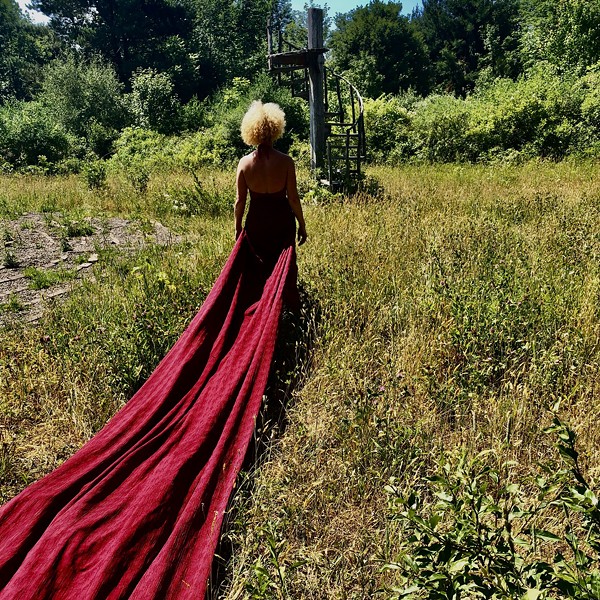 BIODANCE frequently creates site-specific dances. It has performed to Harris’s images projected onto the dome at the Rochester Museum & Science Center’s Strasenburgh Planetarium for three different Rochester Fringes. In 2018, its ambitious Rochester Fringe show “Aria” had soprano Kearstin Piper Brown dramatically appearing from a second-floor doorway, in the midst of a giant flower projected onto the wall by Harris. A piece of “Aria” is included in the BIODANCE Fringe virtual show this year.

In March, as COVID-19 was settling in, BIODANCE performed its final site-specific indoor show. It was at the Memorial Art Gallery, in conjunction with an exhibit of Judith Schaechter’s intriguing stained glass.

“We built a piece in their ballroom where Michelle projected on different parts of the wall,” Smith says, “so the audience had to move through the space and kind of follow the performance.”

There was one more site-specific show this summer by BIODANCE. This one was outdoors, at the Memorial Art Gallery again.

“Even the MAG, even though it’s just a flat lawn, I definitely considered the site,” Smith says. “I would not have made the same dance if it was going to be in a theater, you know, with lights and things like that. When you’re going to be outside where there are distractions of birds and people and cars and other things, you have different considerations.”

Unscheduled distractions, such as the one appeared in the sky during one of the early-evening performances.

Smith turned the stage over to nature. “I was like, ‘OK, we all have to look at the rainbow.’ ”  —Jeff Spevak

Review: “Black in the Box”

Actor and mime Marlon Andrew Burnley’s one-man show opens with a slave on a ship, the beginning of a 45-minute piece that moves throughout a few hundred years in poignant, often jarring ways.

From slavery and war to civil rights and Obama’s inauguration, “Black in the Box” is the oppressive story of being Black in the United States of America. Burnley is a gripping presence, even from the other side of YouTube, and his use of masks to mark time throughout the piece is haunting. The use of sound to serve as an additional “character” and scene change throughout the show is also effective in this medium. There are a moving few minutes at the end of the piece where Burnley addresses the audience (and speaks for the first time).

Understandably, there will be technical limitations related to virtual performances, and this recording both fills in gaps and has some issues. There’s a backdrop showing historical video projections throughout the show; since these are hard to see via recording, they’ve been edited over the YouTube video for better viewing. The camera angles change in surprisingly impressive ways at times as well.

The show was filmed in 2018, from behind a live audience in the venue, with a lower quality camera and no additional sound equipment, which makes for a bit of an echoing, poorly lit, middle-school-play-on-VHS-level viewing experience.

Technical issues withstanding, the subject matter itself is strong. Is it worth paying for lower quality content to support an artist with an important message?

“Black in the Box” will be streaming on demand throughout Fringe. $10. Appropriate for ages 13 and over.  — Leah Stacy

It’s the age of TikTok now, but once upon a time YouTube influencers reigned supreme. And whether their relationships began or ended during their YouTube tenure, fans were always invested in the outcome. Such is the premise for “we broke up,” a Baltimore-based Single Carrot Theatre production, written by DJ Hills and performed by Meghan Stanton and Paul Diem, with a special appearance by Shaquan Pearson.

“we broke up” runs the gamut of YouTube tropes, from thanking fans for their loyalty to having an onscreen argument (or four), a la "Keeping Up with the Kardashians" (RIP). The online break-up announcement trend is a little dated, but still serves as a reminder of the power we allow the internet to wield over relationships, decision-making and self-image. The self-aggrandizing is there in all its cringey glory, and there’s even a cameo from a few sock puppets, as well as some interesting role reversal.

It’s a witty parody that goes perhaps deeper than the live-streaming YouTube medium allows, but manages to eek out a few laughs along the way nonetheless. Come for the internet commentary, stay for the Tom Petty cover at the end.