by CITY News and WXXI News

Writer-performer Brian Feldman may be one of the only people in the world currently on a 12-city, four-country, 64-show international tour. Of course, it’s virtual — and his current production, “#txtshow (on the internet)” is one of the many free options available during this year’s KeyBank Rochester Fringe Festival. It’s Feldman’s first time participating in Rochester Fringe as well.

During the stage manager’s staccato pre-show intro, audience members (tuned in via Zoom) are instructed to keep their cameras and mics on for fully immersive, experiential theater. The 45-minute production is completely scripted by audience members sending private messages to a chatbot of sorts, which is Feldman. He recites and chants and sings his way through the zany lines populated by that evening’s virtual crowd (Thursday’s show focused a weird amount on cheese, for instance).

This whole experiment is luck of the draw, really — a lame audience could turn the show on its head quickly. It gives a new meaning to “theatre of the absurd” as questionably drunk participants type and talk their way through the performance, becoming like a Mad Libs without any provided skeleton script, theme, or context.

While the concept is certainly innovative, it’s also a bit exhausting for the audience. It’s not the attendee’s job to write the script, especially not now. Especially not without a theme. We are tired at the end of each day. We come to the arts to be inspired. Feldman is onto something good here, but maybe “#txtshow (irl)” is a better fit.

The final performance of “#txtshow (on the internet)” is available via livestream at rochesterfringe.com on Saturday, Sept. 26, at 7 p.m. Free. Appropriate for 18 and over. — Leah Stacy

Eastman School of Music alumna and violinist Shannon Reilly has long been a champion of contemporary classical music in the Rochester area — whether performing in Musica Nova at Eastman or interpreting innovative works such as Marc Webster’s hip-hop-classical hybrid “Heartbreaker.”

But Reilly’s performance of composer-writer Anna Heflin’s “The Wonderland Series” is something different entirely.

Far from anything resembling a standard violin recital, the show is a dense, 33-minute fever dream in which music is fully integrated in a one-woman play that investigates numerous facets of author Charles Lutwidge Dodgson’s life and his work under the pseudonym Lewis Carroll.

A highly experimental film, “The Wonderland Series” casts Reilly in multiple roles — narrator, Dodgson, Alice, as well as various other characters she encounters in Wonderland. As narrator, Reilly examines the intellectual ideas found in Lewis’s fiction and engages in historical criticism of Dodgson as an individual.

The topics covered are heady: the “one-reality principle” that time itself has been killed in Carroll’s books; Wonderland as the fallen garden of Eden and the dynamic between the innocence of childhood and the concept of original sin; and Carroll’s depiction of the conflict that exists between nature’s unbending amorality and lack of purpose and humanity’s need to rationalize and find meaningful resolution. In other words, Alice’s insistent need for meaning renders her “a permanent stranger to her natural environment.”

Reilly also portrays Dodgson periodically to convey his strongly held beliefs along with his self-doubts. Heflin’s script does not shy away from Dodgson’s unsettling fascination with female youth, acknowledging the problematic nature of sensuality in his photography on the subject, referring to him as one of a group of literary “child worshippers.” Heflin also delves into Dodgson’s political involvement and his memorization of passages from the Bible.

But it’s when Reilly acts out snippets of Carroll’s books that the performance is particularly riveting. Frequently playing the violin and singing simultaneously, Reilly conveys the distinct nightmare that Alice experiences in Carroll’s books. In an especially odd and poignant sequence, Reilly darts from room to room in her house, retreating to the corner and often facing the wall, desperately plucking away at the strings and fearfully exclaiming of the Red Queen, “Thump, thump, thump...she’s coming!” in a quote from “Through the Looking Glass.” At one point, Reilly enters her bathroom, and cutting open a mylar balloon, proceeds to suck out the helium and let out a series of high-pitched, indecipherable squeaks.

Elsewhere, Reilly-as-Alice explains, “I cannot explain myself because I’m not myself.” Fittingly, there’s a bit of madness to the whole thing.

Heflin’s music for the violin is at times simple and enigmatic, and at other times abrasive and viscerally expressive. Toward the end of the drama, Reilly plays a descending three-note motive as she asks the famous question uttered by the Caterpillar in “Alice’s Adventures in Wonderland” “Who are you?”

“The Wonderland Series” is an incredible watch, and is designed well for the virtual medium. That said, this performance isn’t for casual viewing. Admittedly, it took me several minutes to comprehend what I was watching, exactly. But Heflin and Reilly reward the viewer’s patience and curiosity with a fascinating and impossibly concise examination of the person of Charles Dodgson and the writing of Lewis Carroll.

“The Wonderland Series” will be screened one more time via rochesterfringe.com on Saturday, Sept, 26, at 6 p.m. $10. Ages 13 and over. Shannon Reilly will host a post-performance Q&A on Facebook. — Daniel J. Kushner

Among the many free, on-demand Fringe shows in this year’s lineup is “COVID Zone,” a rebranded production from National Technical Institute for the Deaf’s Performing Arts at Rochester Institute for Technology. Originally called “Twilight Zone,” it was performed and filmed from one static angle behind a live audience in 2014. The piece begins with a choreographed, ASL-interpreted dance montage to Stevie Wonder’s “Superstition,” which transforms into dialogue about preconceived notions (superstitions?) about humanity and, then, about deaf culture and how it is received in the world around us. 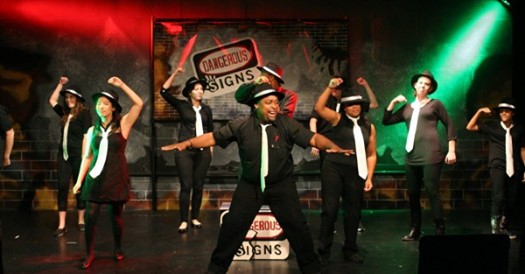 Most of the works at NTID are produced under the company name “Dangerous Signs,” so that wording adorns a mostly bare blackbox stage. Pop culture references (some a little expired since 2014), personal accounts à la documentary theater, actual audio snippets from “The Twilight Zone,” multimedia slides, and more choreographed songs are woven between a voice-interpreted script.

Deaf theater always provides performances that are thoroughly in touch with physicality and movement, and such is the case throughout each vignette in “COVID Zone.” And the fluid portrait of deaf life’s challenges and misconceptions is evergreen, even if the film quality is low and the references are a bit outdated.

“COVID Zone” streams via rochesterfringe.com through Sept. 26. Free. Appropriate for 13 and over. — Leah Stacy