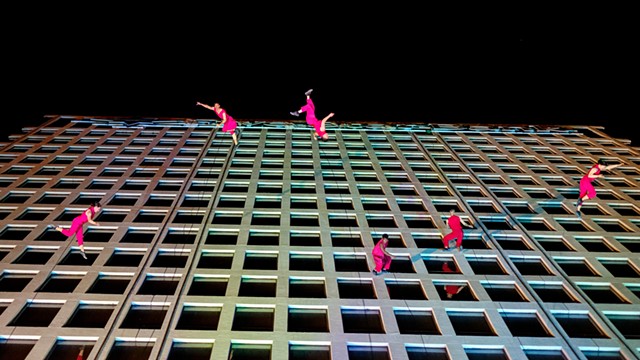 Over the 11-year history of the Rochester Fringe Festival — the cosmic French inflatables, the high-profile comedians, the low-profile drag queens — there has been nothing like Bandaloop.

The aerialists performed at the first two Rochester Fringe Festivals. The ensemble has returned this year for the third time, soaring across the face of downtown’s Five Star Bank building Friday night. And Bandaloop is not done, returning for two more free shows, at 7:30 and 9:30 p.m. Saturday night, the final night of the 12-day Fringe.

On a perfect, crisp September night, as dusk fell on the city, three dancers appeared at the top of the 21-story building, to the cheers of the large crowd spread out across Dr. Martin Luther King Jr., Memorial Park. Bandaloop, based in Oakland, Calif., has done this daredevil act at over 300 venues in 30 countries over 30 years.

Daredevil? That implies aerialists flinging themselves into the void, with no clue as to where they might land. Bandaloop is no such thing. It’s been rehearsing all this week, a calculated show in which all six dancers, and their support crew, know exactly how this show will unfold.

The theme for this day is textiles. A good fit for Rochester, which has a long textile history, preserved to this day in the High Falls district, where water mills once churned. The Bandaloop dancers converted the face of the Five Star Bank building, with its exterior white skeleton and darkened windows, into a representation of a towering fabric loom. 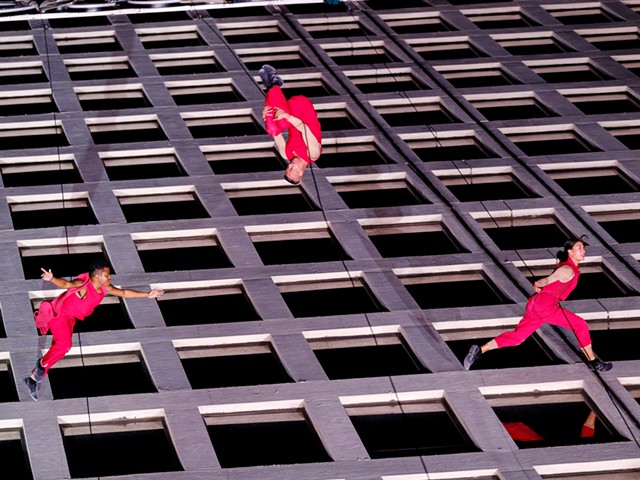 Performing to the deep bass notes of music created especially for Bandaloop, the first group of red-clad dancers descended from the roof, with spotlights shifting from white, blue, green, and red. Spotlights casting shadows on the building of not only the dancers, but shadows offering suggestions of the nearly invisible ropes that held the three dancers as well.

Working about halfway down from the more-than-300-foot-tall building, the dancers whorled, did somersaults, and swung from side to side. A narrator spoke of the textile threads that “swaddled your skin,” then adding a reminder that so many textiles today are “poison chemicals masquerading as natural fibers.”

A second group of three dancers replaced the first, soaring like leaves caught in an updraft, moving in sync, before the performance evolved into all six dancers swooping across the face of the building, then gathering to hold hands before exploding from each other like a flower in bloom. 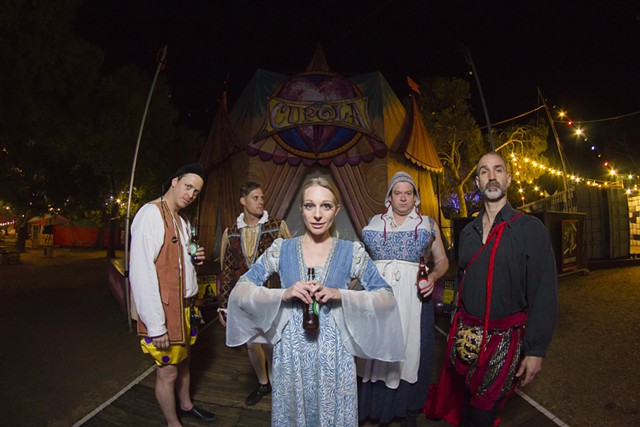 Fans of Shakespeare may find Cirque du Fringe’s reworking of the Bard to be abhorrent. Fans of rowdy drinking entertainment will enthusiastically embrace this interpretation.

So there is a worthwhile middle ground at work in “Shotspeare,” which played to a full house Friday at the Spiegeltent, with Saturday’s show sold out as well.

It’s a side project of the Las Vegas-based Cirque du Fringe, the whacked variety show production that has headlined the Spiegeltent for a while now. “Shotspeare” is a couplet of booze and high literary irreverence. As the group’s founder, Matt Morgan, reminds the audience, “We can’t force you to drink, but it will make the show better, we think.”

Lost in the 90-minute production is the dignity of “Romeo and Juliet.” The actors in this literary classic-turned-farce rushed to the stage with cans of Genesee beer in hand, delivering lines that in part are lifted from Shakespeare, and in the other part cobbled together from a trailer park. Cirque du Fringe prompts from years past were at hand. A spin of “The Wheel of Soliloquy” called for a spanking scene. The actors were bombarded by rolled-up white tube socks and ping-pong balls thrown to a soundtrack of Bon Jovi’s “You Give Love a Bad Name.” Technological fumbling throughout the show became part of the show. Fights were settled with admittedly fake swords and knives. The audience flashed cards whenever it felt it was time for the ensemble to do a shot of alcohol, which at Friday’s show interrupted Mercutio’s iconic death scene three times. Romeo’s death scene was accompanied by the most extensive eruption of flatulence in the history of Shakespearean theater. Although, as far as we know, history doesn’t record such matters. Even Juliet, played by Heidi Morgan, got a little rude on that account.

Much audience participation was at hand, including beer pong.

And as it all wound down, the audience was assured, “I hope you have heard our story with open ears, so now we go to the bar and pound down some beers.”

But even these actors had their limits when it comes to booze. As Matt Morgan begs, “I have three shows to do tomorrow.”