The First Niagara Rochester Fringe Festival has announced the lineup of its 2015 event, which will include more than 500 performances, four new venues, and a larger Spiegeltent. The festival, which will be in its fourth year, will take place Thursday, September 17, through Saturday, September 26, in and around downtown Rochester.

This year's Friday on the Fringe -- the festival's stand-out, free headliner show -- will take place September 18 in Martin Luther King Jr. Park and will feature Grounded Aerial, a New York City-based aerialist troupe that will perform on the side of the 21-story HSBC Plaza as well as on the park's "Tribute to Man" metal framework. 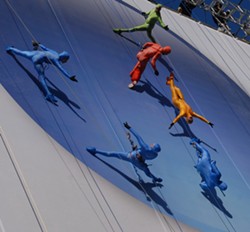 British actor and impressionist Luke Kempner will perform "Upside Downton" as the Fringe's comedy headliner this year. In the award-winning show, Kempner recreates more than 30 characters in a parody of the TV series "Downton Abbey." Performances will take place Friday, September 25, and Saturday, September 26, in the Eastman School of Music's Kilbourn Hall.

Fringe organizers also announced the return of the Spiegeltent to the corner of East Main and Gibbs Streets, this year as a new, larger venue. The Aurora tent, from The Netherlands, will make its US debut, replacing the Magic Crystal tent of the past two festivals. Two world-premiere shows will run inside the tent during the course of the festival: "Cabinet of Wonders," which will include comedy, contortion, aerial, and a one-legged tapdancer; and "Princess Wendy's Late Nite Tease Room," a comedy and burlesque show for adults about a down-and-out birthday princess. Comedian Jamie Lissow -- who opened for Patton Oswalt and Jay Pharoah at previous festivals -- will perform in the Spiegeltent on Saturday, September 19, at 9:30 p.m.

And the surreal Silent Disco (which has sold out in 2013 and 2014) will return at 11 p.m. on both Fridays. The lunchtime version, Brown Bag Disco, will take place at noon on Friday, September 25. 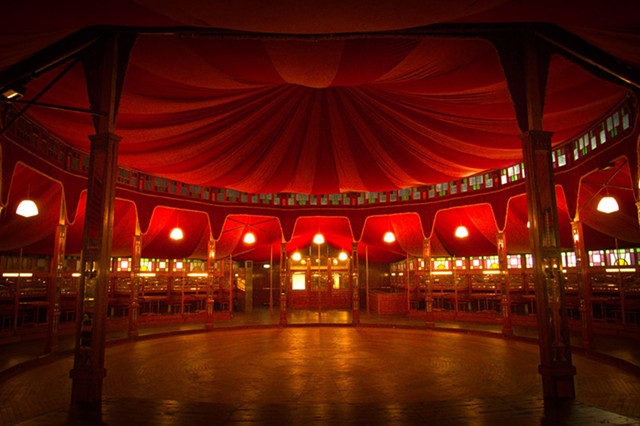 Returning to the Spiegelgarden, which flanks the Spiegeltent: the Pedestrian Drive-In -- free, outdoor movie screenings using Silent Disco headphones -- and the ticketed site-specific shows "Dashboard Dramas" (taking place in four parked cars) and "Bushwacked" (inside a camping tent). A new site-specific show, "Hot Tub: The Musical," will make its debut.

Incorporating the cityscape into the show, Rimini Protokoll's "Remote Rochester" will take a crowd of people wearing radio headphones along a carefully planned urban route. This will be the second US-based "Remote X" show from Rimini Protokoll, a Berlin-based, site-specific theater company. A voice in the headphones will direct the movements of the crowd while music plays, turning the journey into a sort of personal film, organizers said.

Free entertainment -- bands and street entertainers, show highlights, and chalk art -- and food and drink vendors will be on Gibbs Street both weekends.

All of the above events were selected by the Fringe itself, but the majority of the festival's more than 500 performances (up from 380 in 2014) are organized by the venues themselves. Artists submitted their performance proposals to the venues earlier this year, and those venues curated their own lineups.

This year the festival has added four new venues: The Strong National Museum of Play; Abilene Bar and Lounge (153 Liberty Pole Way); the new Lyric Theatre (440 East Avenue), with two performance spaces; and RAPA at the School of the Arts (45 Prince Street), with five performance spaces.

The 2015 Rochester Fringe Festival's full schedule and all tickets -- including the Fringe Fanatic Pass ($190) -- are now available at rochesterfringe.com.