Rochester Fringe confirms there will be a September festival 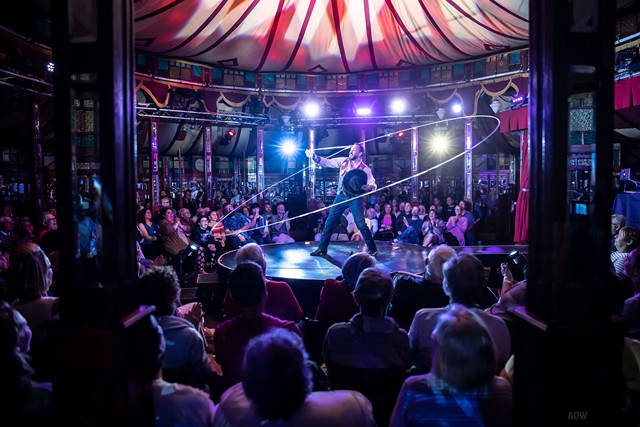 With New York giving the OK for capacity-limited openings of entertainment venues throughout the state starting on Friday, the KeyBank Rochester Fringe Festival confirmed that it is moving ahead with plans for the fall.

“Everything changes on a dime from week to week, so we are staying flexible,” says festival President Erica Fee.

The 2019 Fringe, the last to feature live, in-person performances, drew a record 100,000 attendees to more than 25 venues. But with the country in the grip of COVID-19, last year’s Fringe was reworked with about 170 online shows.

This year’s event, the 10th annual, will run from Sept. 14-25. It will be a hybrid of those last two years with live and online events — but minus the free outdoor spectaculars that have been a signature of previous Fringe Festivals.

“We don’t think that this year we’re going to have a large-scale, huge spectacle performance,” Fee says. “We really are putting those sorts of plans on ice, and pushing them to 2022, because we don’t think that 15,000 people gathered at Parcel 5 is going to be probably acceptable to anyone. Plus, we know that children’s vaccinations won’t have rolled out fully by September.”

The festival expects to make announcements soon about the submission period for artists to apply to Fringe venues, or to apply through the festival’s online platform. That will be followed by the release of a schedule and ticket information.

Fee admits there is a hesitancy among touring acts to hit the road this summer, given the unpredictability of COVID-19.

“I think that’s what’s going to happen this year is that shows are going to book very, very late,” she says.

And Fee already knows that some Rochester venues that have been a part of past festivals have decided that they won’t be opening by September.

The look of the 2021 Rochester Fringe will be determined by the performers who apply during the submission period. And Fee says the reaction from what other festivals are seeing is promising.

“They’re actually really surprised at the amount of content that is now being offered digitally,” she says.

As the year progresses, opportunities for live events may increase as well.

“Right now, what we’re seeing is that a lot of performing arts groups are planning on starting to hold in-person events again this fall,” Fee says. “We’re hearing, particularly from other cities, that this fall is ramming up to be a really, really popular time to reopen doors.

“But that being said, the big focus for many arts organizations through the U.S. right now is outdoor shows,” Fee says. "Our main focus this year is what can we do outside that’s safe. We know that, psychologically, a lot of people will be a lot more comfortable outdoors as well.”

And there will be none of that “return to normal” talk, Fee says. Some of the adaptations made by live entertainment in order to function amid the coronavirus pandemic will remain in place.

“What we’re seeing at other festivals is that there is now this kind of digital component for theater that is probably not going away,” Fee says. “For other performing arts as well. For dance, for music, children’s entertainment. Really, the sky’s the limit.

“But I also think that some people are dying to see some in-person performing arts, and we’re really thrilled that we’re moving forward with that.”