Where can you hear goth/folk songs about the scientist Marie Curie? Rochester Fringe, naturally 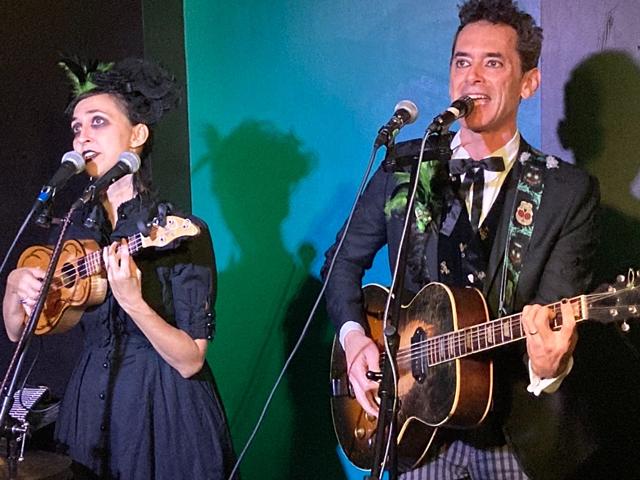 Events that will draw thousands of people are fast approaching. But day two of the Rochester Fringe Festival was a night to celebrate intimacy.

Wednesday’s sell-out at The Spirit Room for the eccentric duo Charming Disaster was, nevertheless, a few dozen people. And for two Rochester-centric shows, nearly all 180 seats in Geva Theatre Center’s Fielding Stage were filled for “Inner Loops: Monologues About Place.” While at Salena’s restaurant, a couple of dozen people turned out to watch three guys sitting at a table, engagingly joking about “Rochester Conspiracies: The Innerloop Podcast.” 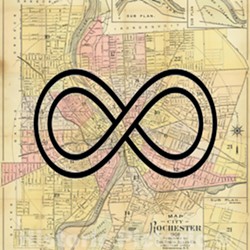 Appreciating the light after it’s gone

“Inner Loops: Monologues About Place” is minimalist theatre: Seven actors, a cellist, a banjo player, three black boxes about one and a half square feet, and a telescope. But the content is deep. Rochester actors Hilary Bluestein-Lyons, Brad Craddock, Jeremy Sarachan, Sejal Shah, Penny Sterling, Laura Thomas, and Ted Wenskus are each granted about five minutes to explain themselves.

And yes, these were monologues about place. Bluestein-Lyons ruminating about her life as the architecture she lived in: “My life is a ranch house,” she said, a simple layout, a straight format. But beyond that, “houses are for hiding.”

And the secrets come out.

The actors are assembled in various configurations for each story, sometimes without explanation for their presence: Two sit at one of the black boxes, playing cards, an action that never figures into the story unfolding just a few feet away.

A Black woman expresses the freedom she felt, represented by the greyhound on the side of the bus that’s taking her from Georgia to Rochester. Away from racism, sexism, and an abusive husband. “She’s running away from her husband just because he beat her up,” the neighbors say with disapproval. But no, she’s running away so she can start her life over.

We hear how life is so many degrees of separation, often comical, as in the pain of riding a bicycle up Cobb’s Hill. But while these are stories of place, it quickly becomes clear that these are also stories of change and growth. That painful ride up Cobb’s Hill becomes easier by degrees with practice. Until even New Hampshire’s intimidating Mt. Washington, many more degrees of elevation, can be conquered.

A woman talks of shedding weight and seeking a relationship that’s more than holding hands. “Who wants ‘just fine’?” she asks. There are poetic moments, as another woman describes how her father, peering through a telescope, says, “Every star has a story, like people.” Some go out in big fashion like a supernova, some simply fade away. “Stars are long gone before you can fully appreciate their light.”

The cosmos contains unimaginable degrees of separation, as is life from death. Even Leah Fox of the infamous spiritualists the Fox Sisters makes an appearance, accompanied by creepy cello sounds, suggesting ghost activity. Coming from a place we can never understand. Ghosts? As Leah says, “It seems some people will believe anything.” 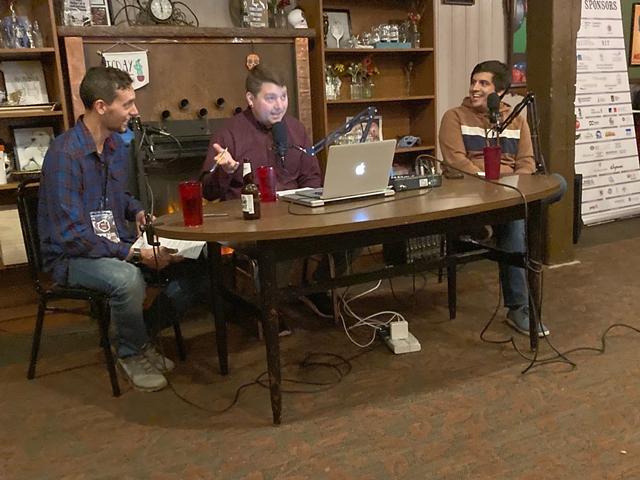 The Innerloop and alien autopsy allegations

Quick witted, self-deprecating Shane Allen is joined by the like-minded Justin Kesel and Mark Maira for “Rochester Conspiracies: The Innerloop Podcast” at Salena’s. “The Innerloop” is a real podcast; in the past it has delved into Rochester history that includes serial killer Arthur Shawcross, the Fox Sisters, and the ABC child murders. Gruesome territory — it could be argued that it’s insensitive territory. There are real victims here.

“But this might be the worst,” Allen says of this Rochester Fringe show.

Nearly an hour of stories and rumors about Kodak. Allegations, as every now and then one of the guys reminded us. These are all allegations.

Well, not all of them. A lot of this chatter is established fact. We know about George Eastman’s elephant hunting. There’s an elephant head on a wall of his former home and an elephant foot repurposed as a piece of furniture. “That’s murder,” Allen says. “It’s like a worse version of ‘The Flintstones.’”

And we know about Eastman’s suicide. We also know that during World War II, Kodak manufactured hand grenades. The Military History Society of Rochester has one in its museum at Village Gate Square. The panel takes it a step darker in saying — alleging — that the fuses were so unworkable that they killed more American soldiers than the enemies they were fighting, because the grenades would explode prematurely.

The Innerloop guys discuss Kodak’s possible involvement in the famous 1947 Roswell flying saucer crash. Kodak was allegedly involved in authenticating the film made of the autopsy on an alien that had died in the crash. Film that subsequently disappeared, while in Kodak’s hands, out of the company’s fear that it would lose its government contracts.

Allegedly. But maybe you saw the reconstruction of the film in the mid-1990s that was shown on television, and even at The Little Theatre.

And there is the quiet mumbling that I-90 does not quite reach Rochester because George Eastman allegedly made someone in state government angry. And Eastman’s alleged involvement in the “redlining” that kept his white workers’ neighborhoods white. Kodak’s alleged fear that new snapshot technology would ruin the art of photography, before it decided that it could make photos a “snap” for the average family. How Kodak allegedly developed the photos from spy planes. There allegedly was a nuclear reactor in a Kodak building basement. How Kodak’s alleged pollution of the Genesee River contributed to the unique taste of Genesee beer. And yeah, Kodak’s interaction with the environment allegedly had something to do with the deaths of animals in the nearby zoo.

Many of these stories, if not most of them, are complete nonsense. And the Innerloop panelists seem to begrudgingly agree.

But then an audience member steps up to the microphone and alleges that, during the Cold War, Kodak’s involvement with spy-plane photography made Rochester a Top-10 target for nuclear attack from the USSR. And yes, to the Innerloop panelists, this seemed very plausible indeed.

The Charming Disaster of Marie Curie

The Spirit Room has brought back Brooklyn’s Charming Disaster. The goth-folk duo of Ellia Bisker and Jeff Morris creates songs that seem drawn from the Edward Gorey sketchbook, with costumes cast aside by Tim Burton. Bisker plays ukulele and foot percussion; Morris plays acoustic guitar. They sing and sometimes whistle. And, dressed in black with dashes of dark eyeliner and odd accessories, they’re a perfect fit in the congenitally weird setting of The Spirit Room.

This year’s show has narrowed the focus. “Our Lady of Radium” is all songs about the Polish-French scientist, Marie Curie. The story of Pierre and Marie Curie is both romantic and tragic; in other words, the perfect story. As Charming Disaster tells it, the couple met and fell in love over their studies of chemistry, eventually working on the study of radium gathered from mines in the Carpathian Mountains.

The songs touch on Pierre’s death; he was hit by a carriage. And Marie’s death from radium poisoning; that element they were working with was not as innocent as they had thought. As the radium warned them early in the song cycle: “I will eat your soul.”

“Our Lady of Radium” is a sad and exquisite celebration of Curie. Countless other people died of radium poisoning as well, from exposure to radium while painting glow-in-the-dark numbers on watch faces. As Charming Disaster sings, radium turns your bones to dust.

Charming Disaster plays again at 6 and 9 p.m. Thursday and 6 p.m. Friday at The Spirit Room.