PHOTO BY JAKE CLAPP
The Old Testament book of laws, Leviticus, lays it out: "When a foreigner resides among you in your land, do not mistreat them. The foreigner residing among you must be treated as your native-born. Love them yourself, for you were foreigners in Egypt."

In the New Testament, Jesus spoke often about caring for your neighbor, whether they're well known or a stranger.

Those were scriptures read Thursday during a service held outside of the Greyhound and New York Trailways station downtown. The service was on behalf of migrants and refugees, with prayers and readings focusing on caring for and supporting immigrants.

About 30 people, many of them clergy representing a variety of Christian denominations, participated.

"We're not protesting. We're praying, but praying is a political act," said Matthew Martin Nickoloff, the pastor of the South Wedge Mission and the leader of the service.

"I think we sometimes compartmentalize doing social justice as a thing only protesters do, or see it as this negative thing," Nickoloff said later. "But I think it may be better to say that to pray under the belief that there's a higher law than the law of the land is itself an act of defiance and protest."

Along with the worship and partaking in the Lord's Supper, there was also a call to action, and members of the Rochester Rapid Response Network spoke about ways people could support immigrants locally.

Churches can often neglect "the things we can do, mending evils, mending injustices, confessing on behalf of our churches in the ways we've failed at that, and committing ourselves," Nickoloff said. "It'll be a protest if people go forth and do something. Until then it's a prayer and a hope." 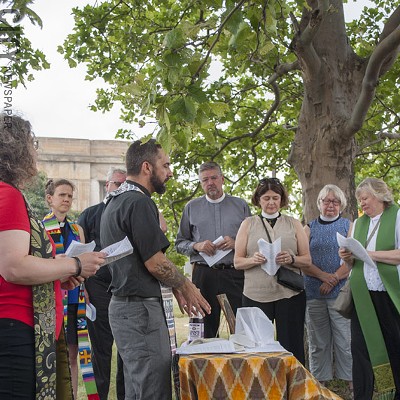 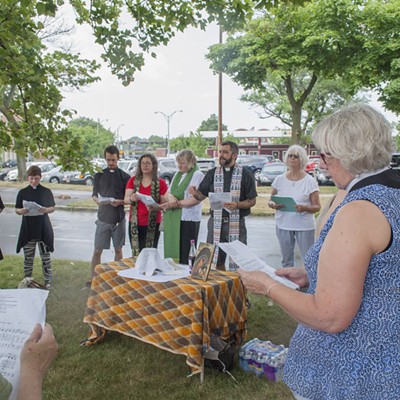 Eucharist for migrants
By Jake Clapp
Click to View 9 slides