Rochester City Council member Jose Peo is backpedaling on an incendiary Facebook post in which he called on black leaders to do a better job impressing the importance of obeying physical distancing recommendations to black residents.

The post, which was published on Sunday evening and has since been removed, was widely circulated and excoriated for what many perceived to be its lack of sensitivity at best, and at worst, a blatant display of racism.

“Dear black leaders,” the post began, “How about you stop pushing for racial disparities in the medical field bc of black Coronavirus deaths, and focus on keeping your constituents safe at home so they don’t get it in the first place??”

His statement was accompanied by a shared live video of a crowd of scores of mostly black people who had gathered on the corner of Miller Street and Clifford Avenue earlier in the day. In the early seconds of the video, which lasts nearly 10 minutes, a man can be heard cursing the virus and yelling, “Ain’t nobody got that shit out here!”

The crowd had gathered in response to a triple-shooting early Sunday that left one man dead and another seriously injured. 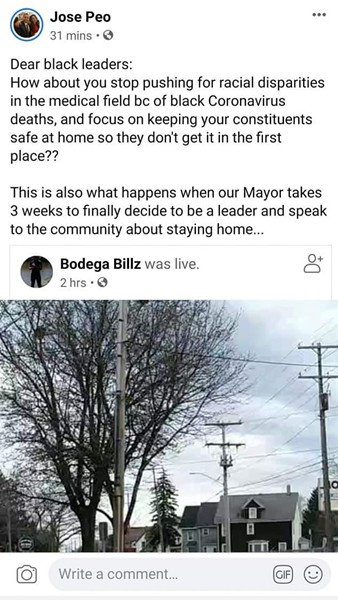 “This is what happens when our Mayor takes 3 weeks to finally decide to be a leader and speak to the community about staying home,” the post concluded.

The remark was a clear reference to Mayor Lovely Warren, who last week held a news conference in which she touched on racial disparities in coronavirus infections locally and said she would use every method at her administration’s disposal to urge residents in communities of color to comply with physical distancing recommendations.

The disparities are not as pronounced locally as have been reported in other parts of the state and country, but data shows African Americans are overrepresented among the sickest patients in Monroe County.

After releasing the data, county Health Commissioner Dr. Michael Mendoza in a video conference attributed the disparities to unequal access to medical care and said, “Structural racism has put people of color on the front lines disproportionately.”

Upon receiving a barrage of criticism for his post, Peo retorted in a comment, “The reason Coronavirus is hitting blacks more often is because of this right here, not because of lack of healthcare.”

Peo represents the Council’s northwest district, where census data show black people make up between a third and half of the residents in the district’s census tracts.

Condemnation of Peo was swift and unrelenting in the hundreds of responses to his post.


Anthony Hall, a former Rochester Board of Education candidate and a youth gang intervention specialist at Pathways to Peace, lambasted Peo for lacking empathy.

“This is not the time for you to try and score points from whatever base you are trying to appeal to,” Hall wrote. “This is not on the Mayor nor any Black leaders. Sometimes we all have to shut up and this is one of those times for YOU.”

Iman Abid, director of the Genesee Valley Chapter of the New York Civil Liberties Union, called for Peo to resign. “Your comments were racist, divisive, and unwarranted,” Abid wrote.

Hours later, after apparently being contacted by black leaders, Peo sought to walk back his remarks in a new post at 11:48 p.m. Sunday in which he apologized, acknowledged his earlier comments were "in bad taste," and said his "lack of tact" distorted his message.

"After a few respected leaders from the community reached out to me and talked it out, I can agree that my prior post was in bad taste," Peo wrote. "The message, no matter if right or wrong, was drastically missed in the language and lack of tact I used.

"I do apologize, and still need to state this: STAY HOME!!!" the post continued. "If you feel the need to be out in public, keep your space (6ft) and stay away from groups. I understand we want to mourn our losses, but we also need to find safe ways to do it right now, so that we don't have even more that come from it."

Reached on his cell phone via a text message seeking an interview, Peo replied that  he would provide a statement. The statement never came.

Speaking to reporters Monday in a video news conference, Warren said she was unaware of the online furor unleashed by Peo's post and that her focus was on continuing to convey the safety guidelines of health experts.

"At this point in time it's not about pointing the finger," Warren said. "It's about lifting each other up. Anyone can sit behind a computer and spew hatred, but it takes leaders to come together to make sure that everyone gets the correct information and everyone understands."

Speaking specifically to the mass gathering at Miller Street and Clifford Avenue, the mayor said that, given the heightened emotion caused by the shooting, allowing the neighborhood to mourn in such a public manner was safer for residents and police than had police dispersed the crowd.

Peo, a first-term Council member who took the oath of office in January, has tangled with the mayor in the past.

In January, just weeks into his tenure, Peo accused Warren of hand-picking a developer to build up the Port of Rochester in a message to constituents in a Charlotte Community Association newsletter.

In response, Warren sent a letter to residents in his district accusing Peo of lying to them about the process to develop the port and suggesting he wanted to steer the project to a preferred developer of his.

Includes reporting by James Brown, a reporter with WXXI News, a media partner of CITY.