"Ballet on the Edge"

"Ballet on the Edge," the upcoming Rochester City Ballet program, is notable for two significant reasons: The performance is the company's first to be choreographed by new Artistic Director David Palmer, and the ballet "Under the Moonlight," which will have its world premiere, is the first new official work set to David Bowie's music since the musician's death in January.

RCB will perform "Ballet on the Edge" on Friday, May 13, through Sunday, May 15, at Nazareth College Arts Center. Performances are at 8 p.m. on Friday and Saturday, and 2 p.m. on Sunday.

Palmer joined the company last November when Jamey Leverett, the former artistic director, officially stepped down to focus on her position as artistic director of the Timothy Draper Center for Dance Education, RCB's feeder school. 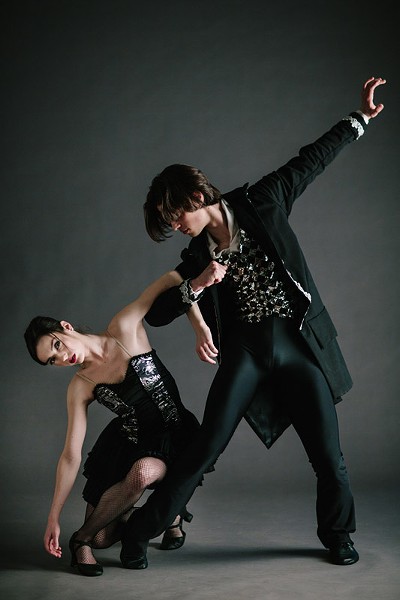 Palmer's choreography will also be featured in "Adiemus," which he created with Yanis Pikieris. Webster native and RCB alumni Jim Nowakowski (recently featured on the reality show "So You Think You Can Dance") will perform "Exit," and Miami Ballet principals Jennifer Kronenberg and Carlos Guerra will perform a duet from Liam Scarlett's "Viscera."

City Newspaper recently sat down with Palmer to gain some insight into his background, experience, and goals for the company. An edited transcript of that conversation follows.

City: You come to Rochester City Ballet from Washington Ballet, a much larger company. What attracted you to RCB?

David Palmer: The position literally fell from the sky. My wife, Stephanie Walz, and I were in New York City for the 75th anniversary of American Ballet Theatre. The next morning, we were at brunch in the Village and we had invited all these people, and Beth Bartholomew, the ballet mistress at Rochester City Ballet, showed up. I'd danced with her in the Joffrey Ballet in the 90's. She showed up and told me they were looking for a new director.

I started looking into things and it looked like the schools were good and the suburban life at least was nice. With two young daughters that was part of the buy-in for me. Great schools and a potentially good childhood.

At Washington Ballet, decision-making was done as a team. My job was to implement those decisions. Here, I am the decision-maker and still the implementer.

During your 35-year career you have both danced as a principal dancer and choreographed for major companies. How does your experience benefit RCB?

When you get a little older you come to understand yourself better, which enables you to express yourself better to other people, and maybe, understand everyone is not like you. You perhaps learn to reconcile those differences. At the end of the day, if you want to go for your dream, you can't do it alone. You have to have people that support you, and maybe for them, that's their beginning.

Will you be fully in charge of choosing the ballets RCB will dance?

You have also had your own company, Maximum Dance Company.

I created Maximum Dance with Yanis Pikieris; we had been principal dancers with Miami City Ballet together. We developed Maximum between 1995 and 1996. So, we'd both been principal dancers with major companies that would have between 70 and 80 dancers. And there's always a core group in big dance companies, a group that dances all the time. Our idea was to take just that core group of great dancers and form a company. We didn't want the 70; we wanted the 10. We created 83 ballets, and had over 30 world premieres.

How has being Australian influenced your dance aesthetic?

No one has ever asked me that before, but there is some impact. When I arrived in New York City in 1983, I was under the impression that I knew nothing. I thought I'd see something amazingly different than in Australia. But I was able to respect where I'd come from, and to realize that the Australian Ballet is one of the greatest companies in the world. I felt disappointment in NYC, but got to work with some amazing people. I took class literally behind Baryshnikov at the barre when I was 22 years old.

His approach was like a pit bull. Tenacious. His way of working — just so impressive. That alone elevated my career.

What are your goals for RCB?

What I want for this company — I guess it's akin to my vision — is for it to be a window into the dance world. The neat thing about a window is that it goes two ways. I want to look around the world and take things from the outside that are pertinent, poignant, entertaining, and powerful. And I want us to be able to create things here that are all those things. I want the dance world to look through the other side and find things that they want. I want us to be a portal. That possibility attracted me to RCB. I think we can do it, so why not? If you can do it, why not?

EDITOR'S NOTE: Rochester City Ballet has added an additional performance at 2 p.m. on Saturday, May 14.