Rochester breweries walk on the wild side with wild ales

PHOTO BY GINO FANELLI Eric Salazar, director of wood-aged beers at Strangebird Brewing, pours a glass of Salus, the brewery's wild dark saison and first foray into wild ales.
On a sunny morning recently, Eric Salazar, the director of wood-aged beers at Strangebird Brewing on Marshall Street in Rochester, poured a glass of Salus, the brewery’s wild dark saison. Upon a first sip, the off-brown brew is tart, then shifts to darker notes of woodiness and funk before ending with an herbal, tonic water-esque finish.

“The challenge of my career has always been balance,” Salazar said. “It’s to let all parts of the beer live and breathe and have a place in the profile, and not be overtaken by whatever fruit you’ve added, whatever bacteria you’ve added.”

Salus is the first wild ale offering from Strangebird, but far from the first for Salazar. In fact, Salazar is credited with bringing wild beers to the United States. In 1996 while working at New Belgium Brewing in Fort Collins, Colorado, Salazar, alongside his former wife Lauren Limbach and brewmaster Peter Bouckaert, produced La Folie, a sour ale that is widely considered the first commercial wild ale made in America.

Aged in French oak foeder vessels and brimming with nuanced notes of tart cherry, dark chocolate, and nondescript funk, the beer would be standard fare in a place like the Flanders region of Belgium, where wild ales have their origins in beers like lambics, framboises, saisons, and Flanders red ales. Coincidentally, Bouckaert had trained at the heralded Flemish brewery Rodenbach. But La Folie was unlike anything American beer drinkers had ever tasted.

“For me, it was the challenge,” Salazar said of brewing wood-aged wild ales. “You’re producing a beer that you don’t know right away whether it’s good or not. You’ve spent all of the time, heart, and soul in making the beer, and you have no idea what the end result will be.” 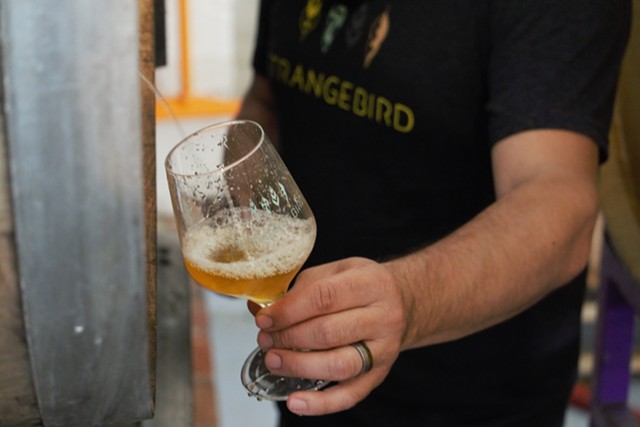 For the uninitiated, a wild ale is a beer brewed using wild yeast, as opposed to commercial brewer’s yeast, and assorted bacterias, and is typically aged in wood barrels for a long period of time. While most beer is aged over a matter of weeks, wild ales spend months, sometimes more than a year, in the barrel.

The “bugs,” as Salazar calls the bacteria, mix and mingle, adding nuanced layers of flavor and personality. Bacterias like Lactobacillus add sourness, while yeasts like Brettanomyces evoke spiciness reminiscent of a farmhouse. If done right, the latter can bring out an earthiness in a wild ale. If done wrong, the beer can literally taste like shit.

Wild ales are challenging to make because they take months to produce and the result is never guaranteed. Thus, despite the beer world’s fervor for Belgian wild ales like Cantillion, a quarter-century on from La Folie’s introduction, you’re unlikely to find many small breweries investing time in wild ales.

Located on the Erie Canal in Pittsford, Copper Leaf Brewing opened in April with a surprising three wild ales on tap, one with peach, another with blackberries, and a third with strawberries. The cozy taproom is adorned with barrels set up between tables, each with a water-filled stopper sticking out from the barrel, bubbling away as the bugs do their work.

Co-owner Clay Killian said he developed a passion for wild ales through cooking.

“All of this came from my love for creating flavors and cooking,” Killian said. “Brewing is really sort of like cooking with science. I look at it as a lot of chemistry and science and equations and different factors involved, but at the end of the day, you’re cooking beer.” In recent years, an explosion in sour ales, typically those laced with heavy doses of fruit, has swept the craft beer market. These beers, dubbed kettle sours, or informally “quick sours,” are beers inoculated with Lactobacillus.

While wild ales are a variety of sour ales, not all sour ales are wild ales. The distinction is important because you’ll find sour beers at most any brewery nowadays, including Strangebird and Copper Leaf. They’re cheaper and easier to produce than wild ales, but are not as layered or nuanced. In the current beer landscape, a quick sour typically works as a vehicle for whatever fruit flavors are added.

Out on Seneca Lake, Jesse Perlmutter of Pantomime Mixtures has carved out a niche for himself by focusing exclusively on wild beers. He is planning on expanding that idea by branching off into wild fermented wines, dubbed “natural wine,” and ciders in coming months.

Perlmutter said kettle sours are the fast food of sour ales. They’re quick, easy, and can be satisfying, but are an unsophisticated version of the sour style. Wild ales, on the other hand, are perhaps the most complex. If a kettle sour were a McRib, a wild ale is a slow-smoked rack from Dinosaur Bar-B-Que.

“I feel like it’s really the way Americans take technology and take a beverage idea and make it (faster and easier),” Perlmutter said of kettle sours.

Salazar, Perlmutter, and Killian all agree that wild ales won’t be the next big thing in craft beer. They won’t replace IPAs or kettle sours. They’re too complex to brew, and their nuance and foreign flavors can turn off casual American drinkers.

Yet across the country, and right here in Rochester, more breweries are dabbling in these long-fermented, hard-to-brew beers steeped in centuries of traditions.
If you see a beer on a tap list with a description filled with more bacteria than hops, consider taking a walk on the wild side.

A gateway of deceptively bright, acidic notes gives way to a torrent of dark, earthy flavors laced with subtle notes of roast and woodiness, before finishing with a crisp, herbal bite.

Tart peach notes play off a backbone of a sour base, melding perfectly at the finish with just a kiss of vinegar and a subdued sweetness. A little extra vinegar and some oil and you’ll have yourself a real nice salad dressing as well.

Okay, I haven’t tried this beer yet, but as of this writing, it is being shipped out to my house. What has me eager to sip this brew is Pantomime’s beers often carry a remarkably bright complexity that is perfect match for an addition of agave and some time in a Tequila barrel.

While not a best seller for Three Heads, this Flanders red ale stands out to me as among the most impressive beers the NOTA staple has ever produced. Expect rich red wine notes laced with touches of honey, tart cherry, and dried fruit.