February 04, 2020
Usually when an album is slated for release, there’s the requisite timeliness, countdown, and impending fanfare. There’s crackling anticipation in the musicians’ camp as well as with the artists’ fans, as the star-maker machine begins to grind forward.

Legendary Rochester band Rain dominated the rock ‘n’ roll scene here for a spell in the early 1970s, playing incendiary blues-based rock to packed clubs in and around town. They shared the stage with national artists like Ike & Tina Turner and Canned Heat.

In its short life span, Rain recorded one live album, got signed to RCA Records, recorded an album for the label, and broke up. Everyone scattered in different directions, and the tapes from the RCA sessions — recorded at the now defunct PCI Studios on Atlantic Avenue in the summer of 1971 — were eventually lost and forgotten. 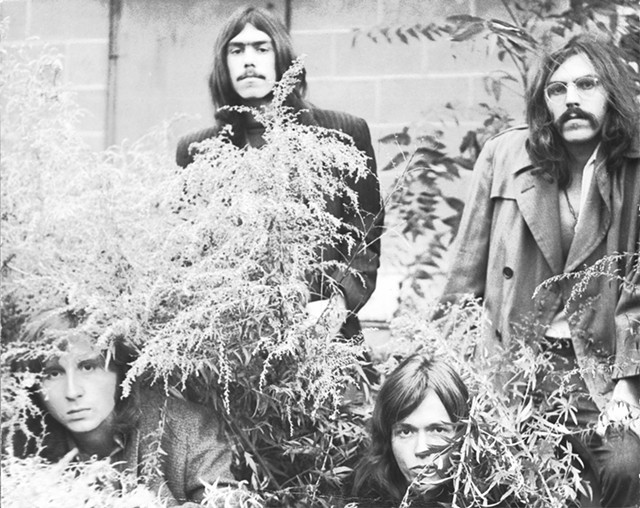 Flash forward to now: Rain is releasing a new album — culled from those 1971 recordings — as a follow-up to its heavy-hitting “Live, Christmas Night” from 1970.

We tracked down bassist Ted Paris in Rochester and guitarist Helmut Getto in Atlanta to see what the big hurry was.

There was the excuse of time, and stories of stuff lying dormant in the backs of drawers and tucked away in obscurity on closet shelves for decades. There were a couple of false alarms, in which tapes turned up but were in rough shape. And some recordings just got tossed out, lost forever.

There is, however, studio impresario and resident rock ‘n’ roll Mr. Fix It, Dave Anderson at Saxon Recording, who had to make sense of it all.

And of course, there’s the band itself. Rain’s heavy doses of blues rock were hammered out under the influence of bands like Ten Years After, The Rolling Stones, Cream, as well as the three Kings — Freddie, Albert, and B.B.

Rain was a band that tore up local stages in clubs like The Penny Arcade, The Club, Hylie Morris’ Alley, The Head Shop, and The Electric Eel. Rain was probably one of the best rock bands to ever come out of the Flower City.

“The boundaries of music were always expanding at the time,” Getto says. “There were lots of outstanding musicians and groups in Rochester. You had companies like Brighton Sound that were so helpful in live sound, Dick Storms’ artistic designs and his light shows always added the extra to many shows.”

Rain shared the bill with other Rochester bands of note, like Portable People and The Red, White, and Blues Band. Paris says there was no shortage of venues, and playing to packed rooms was normal.

Getto looks back at the era of Rain, from about spring of 1970 to the beginning of 1972, as “a great and interesting period of my life, a whirlwind of a time,” he says. He counts his bandmates — bassist Ted Paris, singer Brad Morse, drummer Mick Guerin, and keyboardist Gary Cullota — as some of the greatest musicians he’s ever played with.

“Our personalities clicked,” Getto says. “Brad and I were writing songs, and we had lots of musical freedom with which to explore. We were very busy, especially after the live album came out. It was an exciting but an exhausting time for me, having a full-time job as a printer and the responsibility of a wife and two small children.”

Rain worked hard, but as it often happens, the band’s dynamic proved to be tenuous. The band added keyboardist Gary Cullota to expand their sound which, according to Getto, “needed something fresh.”

“We signed and recorded with RCA and had to choose a producer from a list that RCA had given us — none of who we knew.” Getto says. “The producer didn’t know who we were, what we sounded like live, and what exact musical direction we were heading. Gary was a great piano player, but unfortunately our new musical direction was still developing and the whole recording was a great disappointment. We recorded three singles that were never released, and the band came to a screeching halt.”

There was no interest in putting out the album, Getto says. Only he and Wheat had tapes of the recording — a rough mix of the master on reel-to-reel — which Getto says was abandoned in a drawer.

Eventually Getto found the tapes in that forgotten drawer. He converted the tapes to digital files, and soon after that he got in touch with his former bandmates on Facebook, and made CD copies for them.

Paris and Guerin wanted to put out the album, so about six years ago, Paris first reached out to Dave Anderson for his help in getting the unreleased materials ready for release.

“There was one major flaw,” Anderson says. “The tapes were in real crappy shape: hisses, pops, static, songs with missing parts. They were in pretty rough shape.” The only other copies that were circulating were low-quality bootleg CDs.

Anderson started sniffing around and contacting those who had been involved with the band. There were two questions on his mind: Who did the transfer? And where were the tapes?

He tracked down Jim Armstrong, one of the band’s managers, and the one who had financed the live record.

Anderson then reached out to Bill Thompson — who had recorded the live album with his own custom-built mixing console — to see if he had any tapes lying around.

“Jim Armstrong brought a tape,” Anderson says. “It wasn’t pristine, but it was better than what we had to work with. And it had a missing song on it that nobody had heard since 1971. So that was thrilling. Helmut showed up with these .wav files, but the left channel was recorded too hot.”

Then a former neighbor contacted Getto about a box of tapes that he had left behind when he moved, including one with “Rain” written on it.

So by the time Anderson was done cleaning up the mess, he had gone around three times with three different source materials. Tedious ain’t the word. But the band digs it.

“It captured a stage of growth which was about six months after the live album,” Getto says. “Even though it was recorded in a short period of time and ended with a rough mix, we were able to get a feel for the studio and start developing our songs. It was not a finished work, but reflects our state at that time. It is a part of Rochester music history.”


“Rain 1971...The Lost Album” is slated for a limited release of 500 copies on vinyl in late February, on Anderson’s label Jargon Records. Sadly, singer Brad Morse passed away two years ago, and the band has no plans on ever playing live again.

“These were incredible circumstances,” Anderson says. “It’s an honor to be part of this project. I mean, how many times does this happen? It could’ve been lost forever.”