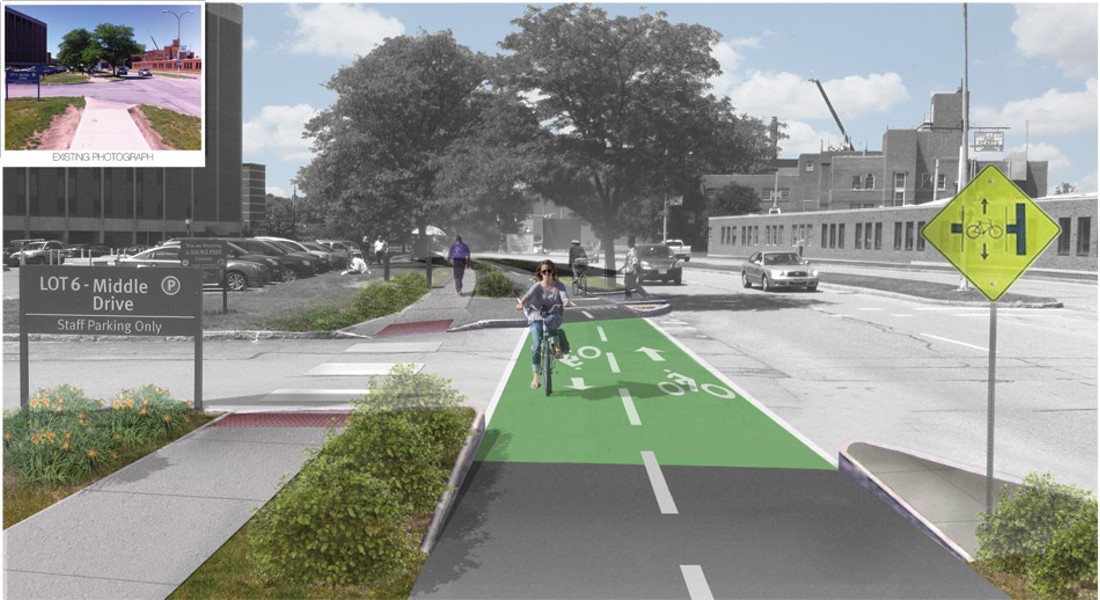 Drawing courtesy of the City of Rochester. The city expects to start construction on the Elmwood Avenue-Collegetown cycle track this year. The project will create a two-way, bike-only corridor along Elmwood between Wilson Boulevard and Mt. Hope Avenue.

For close to a decade, the City of Rochester has methodically worked to become more bike friendly. Officials have tried to incorporate bike lanes and cycle tracks into road resurfacing and reconstruction projects whenever possible. They designed a series of alternate routes that cyclists can take instead of car-packed main roads. They launched a bike-share program. And they've tried to make sure that people have a place to lock up or securely store their bikes when they get to their destination.

That work will continue this year. Construction is set to begin on several key projects, and design work will start on other important bike infrastructure, including some trail work and connections that will be part of Roc the Riverway.

"This is all about getting to a low-stress bike network in the city," says Erik Frisch, a transportation specialist for the city.

After several delays, construction will begin this year on the Elmwood Avenue-Collegetown cycle track, Frisch says. The two-way track is a dedicated passageway for cyclists – neither pedestrians nor cars can use it – and it'll lie directly alongside the three-quarter mile stretch of Elmwood between Wilson Boulevard and Mt. Hope Avenue. The project was supposed to be Rochester's first cycle track, but the one built along Union Street and Howell Street as part of the Inner Loop East fill-in is already finished.

The city has several resurfacing projects that will include the addition of bike lanes: Beach Avenue in Charlotte, Dewey Avenue north of Ridge Road, Alexander Street, and Scio Street. The state is resurfacing Mt. Read Boulevard between Lyell Avenue and Buffalo Road, and bike lanes will be added there as well, Frisch says.

A project along the Genesee River's west wall near Corn Hill will start this year; when construction is completed in 2020, cyclists will have a better connection between Corn Hill and Ford Street, Frisch says.

The city will also begin construction on 10 miles of bicycle boulevards; each route was identified as a priority in a previous city plan. The bike boulevards are meant to serve as alternate routes that run parallel to busy streets that can be difficult for cyclists to use. Wayfinding signs direct cyclists through the route, and pavement markings and traffic-calming measures are installed to keep drivers' awareness up and their speed down.

"We'll be way ahead of schedule in building out the whole bike boulevard network," Frisch says.

Town of Brighton officials are working with the city on the Highland Crossing Trail project, and the town is taking the lead on construction. The trail will start in Brighton Town Park off of Westfall Road and will end at McLean Street, off of Mt. Hope Avenue near Mt. Hope Cemetery. Construction on that trail, which will link the Erie Canal trail in Brighton with the Genesee Riverway Trail in Rochester, will start this year.

City planners will be working on designs for several other trail projects this year. They'll finish up designs for the first phase of the Eastman Trail, which will connect the Route 390 trail at the border with Greece to Mt. Read Boulevard. The trail will ultimately connect with the Genesee Riverway Trail after future phases.

Staff will also work on designs for the Brewery Line Trail along the rim of the Genesee River gorge at High Falls Terrace Park.

And the city will finish construction of the Erie Harbor promenade, which connects to Court Street near Dinosaur Bar-B-Que. The promenade is part of the city's Roc the Riverway project, which is meant better tie in downtown to the Genesee River.

Roc the Riverway also includes plans to redevelop Broad Street by removing the deck above the Erie Canal aqueduct and closing the area to traffic. The project will create a pedestrian-oriented area, but it will also create a hub for multi-use trails coming in from different directions, including the Genesee Riverway Trail. That central connection will provide cyclists with easier access to downtown and other parts of the city, Frisch says.

"It really brings everything together," Frisch says.