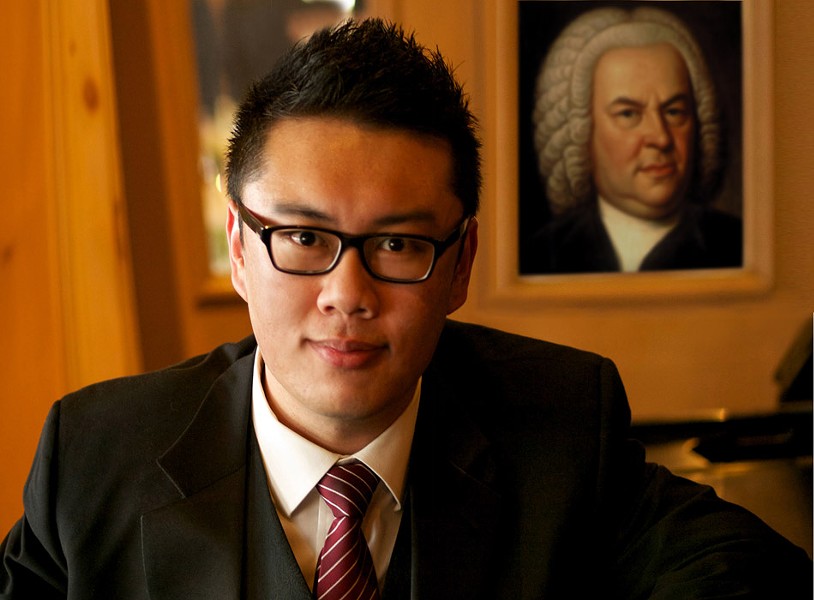 When lists of the great composers are compiled, Johann Sebastian Bach is usually placed at or near the top. And at the top of Bach's enormous and awesome musical output, many would place his two settings of the biblical Passion text: the story of the arrest, trial, and crucifixion of Jesus Christ. Bach's "Saint Matthew Passion" is frequently heard during Lent, his "Saint John Passion" less often. But a concert this weekend presented by the Rochester Bach Festival gives audiences the opportunity to hear it.

Bach spent many years as the music director of St. Thomas Church in Leipzig, where his many duties included the writing of hundreds of cantatas for daily and weekly worship, as well as larger pieces such as his Passions. Bach wrote the "Saint John Passion" for performance on Good Friday 1724. This very thorough composer wrote a setting of each of the Evangelists' accounts of the Passion, but only the "Saint John" and "Saint Matthew" versions survive in full. Only the text of a "Saint Mark Passion" survives, and nothing at all of a "Saint Luke."

Composers before Bach wrote settings of the Passion story, but his were the most ambitious and lasting. An opera depicting the Passion would have been unthinkable in Bach's time, but the musical intricacy and dramatic impact of his settings can be described as operatic. In both his existing Passions, Bach uses a tenor soloist as an Evangelist (narrator) and a bass or baritone as Jesus; other soloists play smaller roles (like Peter or Pontius Pilate), or sing arias reflecting on the events in the story. The chorus plays a very large part, either as people of Jerusalem or in singing chorales — hymn tunes Bach's Lutheran audience would have recognized (and to which they could have sung along).

The grandeur of Bach's Passions has in the past often led to slow-paced, heavy performances, performed by forces much larger than Bach would have wanted. Scholarship in recent decades has revealed much more about how works like Bach's Passions were originally performed, and this weekend's performance, directed by David Chin, will reflect that.

Instead of a chorus of dozens and an orchestra to match, a total of 22 musicians are involved. This is the new normal for performances of large 18th-century works, according to Chin. This includes Bach's 200-plus surviving cantatas. Chin has led several of these beautiful works in the past year, using only one singer on a part and a few instrumentalists. A bigger work like the "Saint John Passion" calls for a bigger choral and instrumental sound, but it will still be relatively intimate.

According to Chin, this reflects the difference between John's gospel account and Matthew's. "The tone of John's Passion story is more personal, and more intimate – a very different perspective from Matthew's. So the piece is more reflective and uses fewer soloists," Chin says. He adds that while Bach revised his "Saint John Passion" several times, the fourth and final version — which is what will be performed Sunday night — is very close to the 1724 original.

"In preparing the 'Saint John Passion,'" Chin says, "I was thankful to have had the opportunity to conduct nine of Bach's cantatas in the past year, here in Rochester and at a choral festival in Hong Kong," he says. "Most of the Bach cantatas are laid out as an opening chorus, a recitative and aria, a chorale, another aria, another chorale and so on. The Passion follows the same structure — it's like several cantatas in one continuous work."

For such a large and detailed work, the written score of the "Saint John Passion," like other works of Bach, Vivaldi, Handel, and other 18th-century masters, leaves a lot of leeway to performers — what is on the page is only the beginning. Choices need to be made about tempos, ornamentation (decorative notes added at the performer's discretion), and instrumental textures. For example, says Chin, while Sunday's performance will use a harpsichord during the Evangelist's recitatives — typical 18th-century practice — it will use the organ to accompany Jesus, giving an aural "halo" to his words.

"This is what I love about Bach, and about baroque music in general," says Chin. "You must use your imagination and be creative in fulfilling the sound of the music and the emotion of the words."

Chin is the director of choral activities at Roberts Wesleyan College. A native of Malaysia who studied in Florida and Virginia before coming to Eastman School of Music for a master's degree in choral conducting, he'll be returning to Eastman in the fall to begin a doctoral degree. Chin says that he came to Bach's music through his love of such masterpieces of religious choral music as Handel's "Messiah," Haydn's "Creation," and Mendelssohn's "Elijah."

"Those composers all referred to Bach as their musical father," says Chin. "Great as he was, nobody could truly follow in Bach's footsteps. No one else has been able to express such a deep musical and religious vision in such a personal way. His music has been called 'three-dimensional theology.'"