PHOTO COURTESY WIKICOMMONS Hartwell Hall at SUNY Brockport.
Local colleges and universities are cautiously optimistic about a fall campus reopening, although what that may look like is still up in the air.

Campuses emptied in March as the pandemic went into full swing, with schools switching to online learning and directing most students to go home. But as the state moves to slowly reopen portions of the economy this month, schools are looking ahead to the next academic year and most are preparing to reopen their campuses.

University of Rochester Provost Rob Clark sent a letter to students and faculty last week stating the school plans to carry out a full two-semester academic year on campus. Clark acknowledged that pending state guidelines may interfere with those plans. 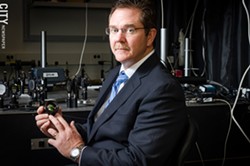 “Factors beyond our control, including the continued course of the COVID-19 pandemic, state and local rules on social distancing, and the ability of our international students to obtain visas and travel to Rochester, may alter those plans,” Clark wrote.

Many colleges are facing a large loss in revenue right now, which would be compounded by tuition loss if campuses remain closed in fall.

“It’s not a question of whether institutions will be forced to permanently close, it’s how many,” Paxson wrote.

All universities could face a massive budgetary shortfall as a result of the pandemic from refunds of room and board, lost revenue from sporting events, and so on. Keeping tuition becomes increasingly critical.

Colleges across the nation are already starting to feel the squeeze. For example, earlier this week University of Akron President Gary Miller announced the school would be eliminating six of its 11 colleges, citing a $65 million revenue drop. Western Michigan University, meanwhile, laid off 240 employees last week as it faces a $45 million loss.

“I think everybody is aware of that and keeping it in mind,” said Associate Vice President for Enrollment Management at Monroe Community College Christine Casalinuovoa-Adams. “Right now, our top priority is the safety of our students and making sure we have the right protective measures in place.”

On Sunday, Rochester Institute of Technology President David Munson put out a letter similar to Clark’s, citing the creation of a Fall Planning Task Force with plans to open in fall. 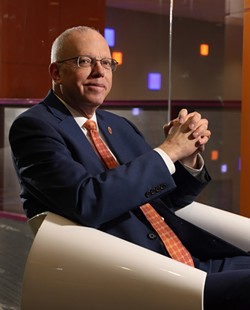 “We have an enormous amount of exciting work in front of us prior to Aug. 24, the first day of the fall semester, but I am confident that with our creative talent and the thinking that’s already been done, we will craft a solid plan,” Munson wrote.

SUNY Brockport is also developing a task force to plan for reopening in fall. The goal of those bodies is to set up protocols for student safety, quarantine housing, physical distancing guidelines, and a slew of other issues.

The Office of the Provost will lead the task force at RIT, which will be made up of students, faculty, and staff, while Brockport’s task force will be led by Emergency Manager Frederick Rion.

“Right now, we have about 40 students on campus, so we could easily handle (a surge in infections),” said John Follaco, director of communications for SUNY Brockport. “In the fall, when there are many more students on campus, that’s going to take a lot more planning.”

Follaco said Brockport, as a state university, is in a unique position in which they can not independently make decisions on whether or not to reopen campus. That is a decision that needs to be made across the SUNY system. The university did, however, independently decide to establish the task force.

St. John Fisher is also planning to reopen in fall.

“We are preparing a number of contingencies that will allow us to maximize the percentage of operations that will be on-ground, and planning scenarios that recognize the changes in our campus living and learning and environments necessary to ensure the safety and well-being of our students, faculty, and staff,” a provided statement from the college reads.

Exactly what protocols will be put in place at local colleges and universities, and how they will change campus life, aren’t yet clear. What is clear is that the shift to online only teaching has posed a challenge for some schools. For example, a class action lawsuit was filed last week against RIT, alleging the closure of campus removed much of the value of the price of tuition, and that the school owes restitution to students.

The lawsuit alleges the closure deprived students of “recognizing the benefits of in-person instruction, access to campus facilities, student activities, and other benefits and services in exchange for which they had already paid fees and tuition.”

Director of University Communications Ellen Rosen said RIT does not comment on pending litigation. Thérèse Hannigan, director of RIT Online, said it was a difficult task to shift coursework to all online.

“Although it was a heavy lift, support staff worked closely with faculty to make the pivot quickly to remote modes of instruction, developing comprehensive online guides and ramping up our existing consultation services for faculty,” Hannigan said.

RIT is one of several universities being sued for charging full tuition for online courses. Over the past week, lawsuits have been filed against George Washington University, Cornell, and Brown, to name a few.

Other colleges have had an easier go of the transition to online learning. Casalinuovo-Adams said MCC, which is also planning to open in fall, has offered online courses for about 20 years and was uniquely prepared for the transition.

“It is always a learning experience, some students have trouble getting online, some are remote,” Casalinuovo-Adams said. “It’s a difficult challenge, but I think we’ve risen to the occasion.”