Play isn't just the joyful squeals of kids on swings or the sometimes abstract drawings that manifest when a child puts marker to paper.

"When we don't give those opportunities to kids, we're really robbing them of the developmentally appropriate practice that they need to be successful in life," said Beideman, who lives in the North Winton Village neighborhood with her husband, Craig.

Beideman, who is originally from the Toronto area and is a former policy aide to the Legislative Assembly of Ontario's standing committees, has been in her position at Common Ground for five years. She's spent much of that time supporting the organization's Healthi Kids Coalition, a collaborative initiative that promotes healthy lifestyles for children.

Play is a major focus of the coalition, which has run an expansive yet targeted campaign around it over the past four years. Beideman has been the backbone of those efforts.

Her advocacy takes on different forms. As the city developed its Rochester 2034 comprehensive plan, she attended dozens of meeting alongside parents, advocating for the city to include play as a priority in the plan.

The night that City Council approved the plan, which indeed included play as a priority, Beideman was there to offer remarks supporting it.

Beideman has also been among the Health Kids Coalition members and allies who have urged the city to make its streets more pedestrian- and bicycle-friendly, which she said helps make communities safer for children.

"All of this work around play has been a community effort, it's been a team effort," Beideman said. "That's the best part of my job, getting to work alongside so many residents and youth. We're all building things together."

Beideman and other coalition members kept hearing from parents that their children needed time for unstructured play in the schools because not all kids had the opportunity to play outside at home. 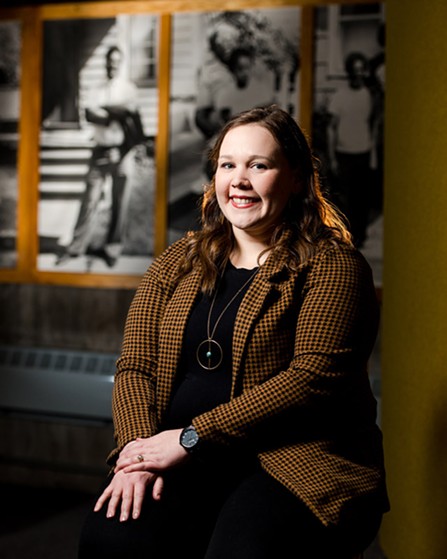 In response, the coalition and its partners ramped up their efforts to promote safe spaces for play and to develop public play spaces. As Beideman dug into policy research and began looking at what other communities have done around public play spaces, she saw a lot of potential for Rochester.

The Phyllis Wheatley Library Story Walk grew out of that work. So did the new Play Walk near Strong Museum and Martin Luther King Jr. Park at Manhattan Square. The Play Walk features large games and a collection of musical instruments that anyone is free to play. It's popular with kids and adults.

The coalition is working with other community groups on additional public play spaces. Ultimately, Beideman's goal — and the goal of the Healthi Kids Coalition and its allies — is to foster a "play everywhere" atmosphere in the city.

They want to emphasize that play happens, and should happen, in everyday space. It can take the form of hopscotch on a sidewalk or a game at a bus stop. Kids walking from their schools to rec centers can play.

"Play can happen outside of parks and playgrounds," Beideman said.