Around the ice rinks, baseball diamonds, and gridirons of the Rochester youth sports circuit, one name electrifies the sidelines like none other: Bella.

Bella is Bella Fanale, a 12-year-old athlete from Webster so dominant that around the scene she has become one of those first-name-only people, like Beyonce or, in the world of sports, Abby.

Her name simultaneously evokes fear in her competition, relief in her teammates, and awe in spectators. "Bella" means "beautiful" in Italian — a fitting name in that watching Fanale play has been called a thing of beauty.

"When she walks into a building, everyone knows she's there," her hockey coach, Mike Rizzo, said. "And it doesn't matter which sport. I've never seen a single player dominate a sport at any level, boys or girls, like her. She's playing a different game than everyone else."

Likening young athletes to legends is a dubious undertaking. The annals of sports journalism are littered with stories hyping up phenoms who never panned out. Rarely, though, does a youngster come along who, by all accounts, is exceptionally versatile in so many sports.

"You're going to be hearing the name Bella Fanale for years to come," her baseball coach, Brian Beachner, said. "There's no doubt in my mind. She's something special."

In professional athletics, players are judged by their numbers — goals, batting averages, sacks, rebounds. Reliable statistics are hard to come by in youth sports, however. Amateur organizations tend to emphasize player development over statistical achievements. Many teams do not keep records.

Anecdotes are perhaps the best way to gauge a young player's impact. In the case of Fanale, they abound. Consider this sampling from her coaches:

There was the time last hockey season that she scored eight goals in one game, then capped off the year with five goals in her team's 7-3 win in the state girls' championship.

In football, she rushed for over 1,000 yards and scored 25 touchdowns playing against boys. On defense, she led the team in tackles.

Her power-hitting drove her Little League baseball team to the state tournament. She was the only girl on the team and homered in the district semi-finals. 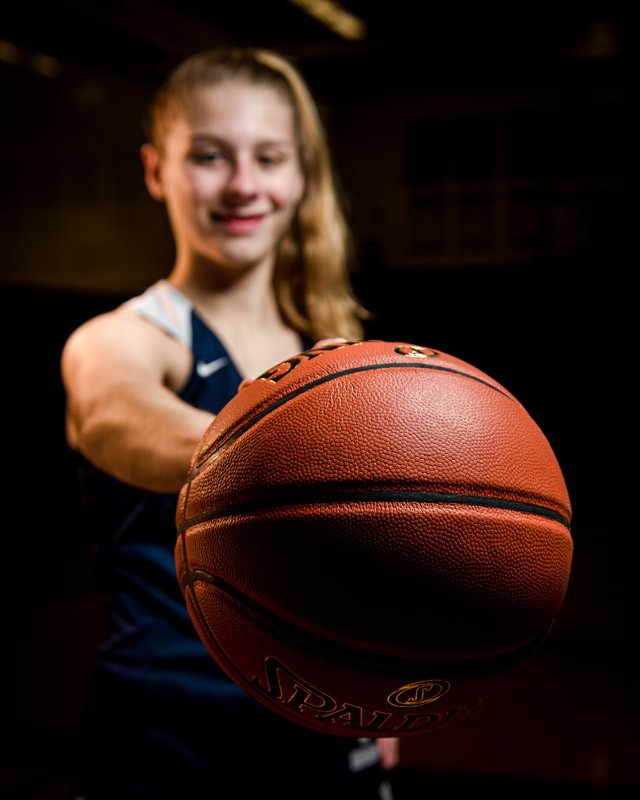 Stories like those reached Patrick Claire, who coaches junior varsity basketball at Webster Thomas High School, last summer. They moved him to invite Fanale, who would only be entering seventh grade at Willink Middle School, to play for him in a summer tournament.

"She played against ninth- and tenth-graders and scored 75 percent of our points," Claire said. "She did almost anything she wanted out there. She was the best athlete on the floor by far."

It is tempting to call Fanale a natural. But just as legendary baseballer Ted Williams used to retort when people labeled him a natural, "No one ever swung a bat more often than I did. No one practiced harder than I did," the same could be said for Fanale.

She rises at 6:15 a.m. most days to work out for an hour before school. She jogs, does leg and abdominal exercises, and shoots pucks and dribbles a basketball.

"I hear her in the basement dribbling a basketball or in the garage shooting pucks. It's like clockwork. Everyone else is sleeping," said her father, Tony Fanale. "She doesn't have to do that as a kid. But she loves it. She's trying to get better and she's putting in the work to do that."

Fanale, the middle child of three sisters, said she wants to someday play hockey at the Division I and Olympic levels, then go pro.

Just don't tell her she has a shot. She doesn't want to hear it.

"I feel pressure when people tell me that I'm really good because I don't know what to say to it," Fanale said. "I'm just doing the thing I love."