Rella does not accept cash or reservations

There's not a bad seat in the house at Rella. That's because any seat you choose -- and there are only 15 -- is a seat at the chef's table. The new restaurant, which opened on Monroe Avenue in June, is an intimate dining bar where you can watch the kitchen's every move. There are no tables, and no waiters. Instead, the cooks do double duty, deftly plating and serving dishes while chatting with the diners just feet away.

Rella is the sister establishment of popular Italian restaurant Rocco, located three doors down at 165 Monroe Avenue. Both are owned by Mark Cupolo, a Rochester native who got his start in the restaurant industry in Boston in the 1980s. Cupolo opened Rocco in 2008, and in the decade since has several times considered opening another restaurant nearby. By the time the space at 181 Monroe Avenue became available, Cupolo already had an idea of what he wanted his next restaurant to be. 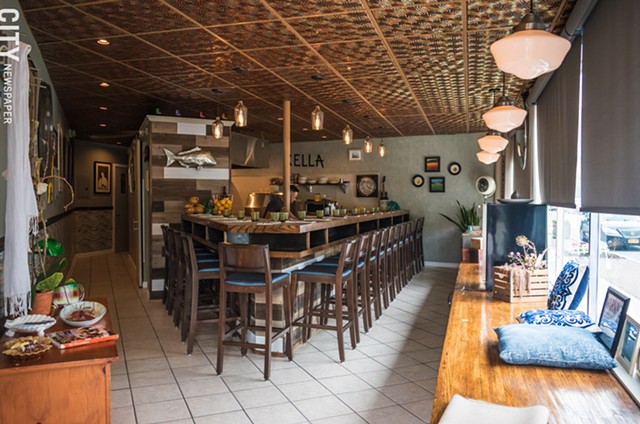 Together with chef Cruz Nieves, a veteran of Rocco as well as New York City establishments such as Del Posto, Cupolo formed the concept of a casual but refined seafood-centric dining bar. Like Rocco, Rella is heavily influenced by Italian cuisine, but its menu focuses on a rotating selection of small plates that showcase the fresh seafood Cupolo has shipped in from Boston.

A friend and I visited Rella on a recent Thursday around 6 p.m., scoring the last two seats in the place. The open kitchen occupies the center of the unusual triangle-shaped space, with the bar running around it on two sides. Allusions to the seaside abound, from the shell-shaped side plates to the oyster-patterned wallpaper accenting the kitchen. Large chunks of blue sea glass adorn the bar at either end.

It was a hot, humid night, and Rella's air conditioning was not yet up and running. Nevertheless, a couple chilled glasses of Trebbiano and half a dozen oysters served on a heaping pile of crushed ice was enough to keep us cool. The fresh, briny mollusks were adorned with either a bit of zesty cocktail sauce or a pinch of vinegary mignonette. 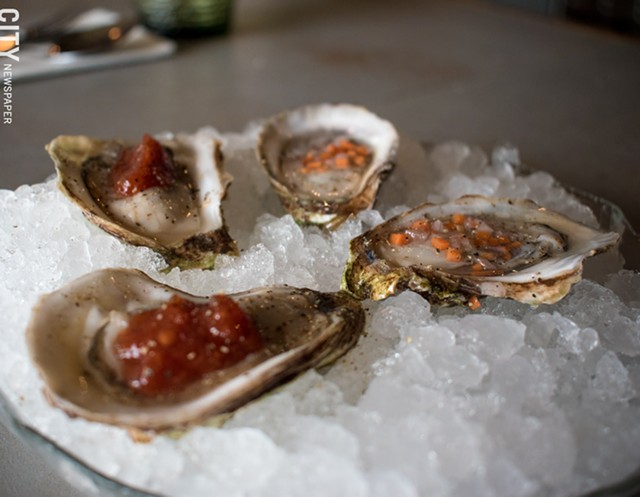 We followed the oysters with a plate of burrata, slashed to reveal its creamy interior and accompanied by a salad of mixed greens, grilled corn, and tomatoes, dressed in a chanterelle mushroom vinaigrette. The tuna crudo arrived next, the raw fish delicately fanned out alongside crisp slices of cucumber, and strikingly garnished with thinly-sliced green beans, fresh dill, and spiky shards of black salt. Satiny yet subtle, the tuna was one of the highlights of the meal, we agreed.

We decided to round out our dinner with a Sicilian-style pizza, which is traditionally prepared with a thick crust. Rella's version featured an airy, sky-high crust generously topped with scallions and crab meat, and finished with a dramatic zigzag of saffron aioli. 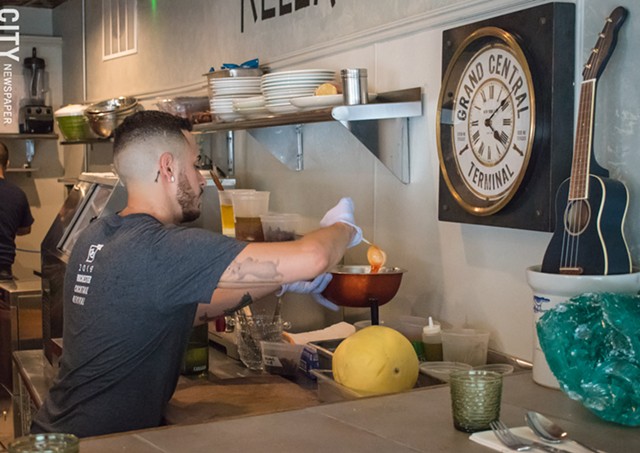 Throughout the meal our server, sous chef Tyler Gaudioso, graciously answered our many questions about the meal. Cupolo himself flitted in and out over the course of the evening, slicing melon, tasting dishes, and greeting patrons.

Though we hadn't planned on dessert, Cinnamon Toast Crunch ice cream was too intriguing to pass up. Nieves explained that he had toasted the cereal and soaked it in cream to render the sweet, spicy flavors that, for some, are the very essence of childhood. Right before serving, Gaudioso applied a drizzle of olive oil over the ice cream, proving that there isn't really anything that can't be improved with a judicious dose of the good stuff. As I remarked on the ice cream's satisfying touch of salt, Nieves zipped past with plate in hand, announcing, "If your pastry chef is not putting salt in his desserts, fire him." 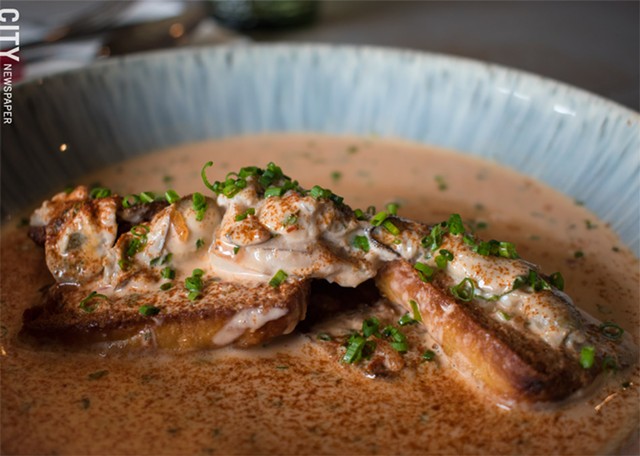 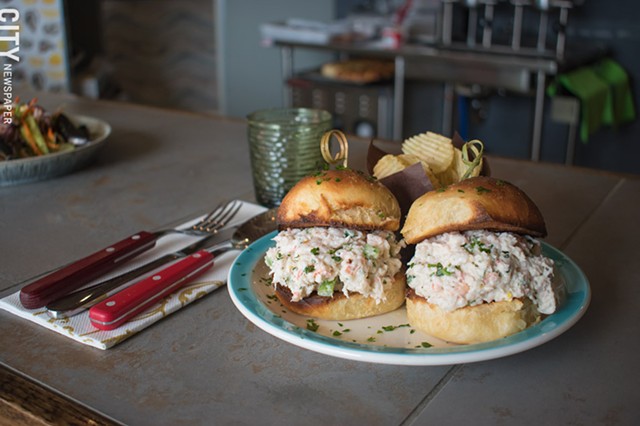 It's worth noting that Rella does not take reservations and only accepts credit and debit cards for payment. Those are just a couple of the steps Cupolo has taken to keep things at the new restaurant simple. Rella doesn't have a website, or a phone line (though you can call Rocco for inquiries).

As you leave the restaurant, you can't miss the large mural next to the front door depicting the late Anthony Bourdain, whom Cupolo acknowledges as a major influence. When asked why he decided to have the famous gourmand's face painted on the wall of Rella, Cupolo cites a passage from Bourdain's best-selling book, "Kitchen Confidential," in which the author remembers his first oyster: "It tasted of seawater...of brine and flesh...and, somehow...of the future." 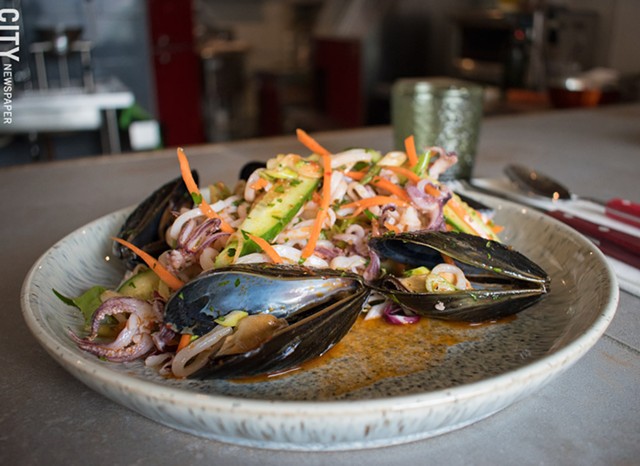