February 19, 2020
It’s been about a year and a half since Governor Andrew Cuomo announced that the state would provide Rochester with $50 million to support ROC the Riverway, an initiative to revitalize the Genesee River corridor through the city.

ROC the Riverway brings together over two dozen projects that, officials have said, promise to upgrade existing parks, public spaces, and amenities along the Genesee Riverway Trail, and to bring more life to the underused Genesee River waterfront.

Slowly but surely, projects are coming together. A new promenade by the Dinosaur Bar-B-Que opened in September, for example, and the much anticipated Roc City Skatepark broke ground in October. 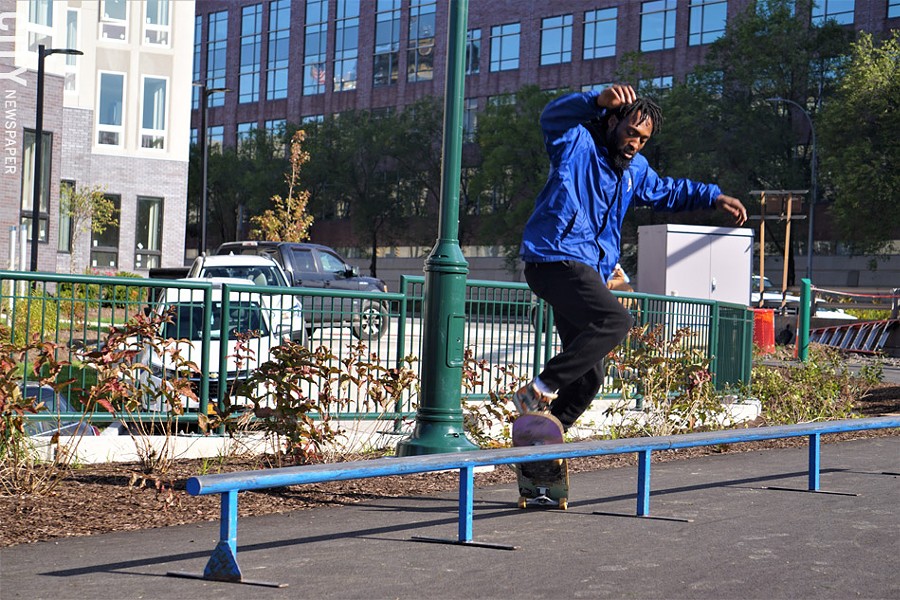 Now the big projects are beginning to move forward, the ones intended to further city and community efforts to make downtown into a pedestrian friendly cultural haven. City Council will be voting on key aspects of these projects at its February meeting.

Here is what to expect around three of the bigger ROC the Riverway undertakings in 2020.

With a round of new funding slated to come in this month, the Roc City Skatepark is on track to open in the fall.

Rochester City Council is scheduled this month to vote on accepting an additional $50,000 grant from the Tony Hawk Foundation, which previously pledged $250,000 to the project.

The additional $50,000 will support soil remediation, landscape improvements, and bike racks, among other “green” initiatives. Council is also expected to accept new funding from the non-profit Friends of the Roc City Skatepark.

The skatepark will be located along the western edge of South Avenue, partially beneath the Frederick Douglass-Susan B. Anthony Bridge. Rochester is currently the largest city in the nation to not have a public skatepark, according to city officials.

Daniele Lyman-Torres, the commissioner of the city’s Department of Recreation and Youth Services, said the initial groundwork to clear the way for the skatepark has already started.

The skatepark master plan outlines three phases of the project, the first of which carries a price tag of $1.8 million and will result in a 16,500 square foot park. Lyman-Torres said that portion of the project is fully-funded, but the remaining phases would likely need financial support.

Under the current plans, the skatepark would grow to 27,700 square feet by the end of the third phase. City officials estimate that the costs will total $4.3 million.

The park was designed by a local firm, Stantec, which worked alongside California-based park designer Kanten Russell. The park will be built by Grindline, a world-renowned skatepark builder that has constructed parks from Houston to Copenhagen.

The Rochester park is inspired partly by Boston’s Lynch Family Skatepark, another Russell-designed park located underneath an urban bridge.

“There’s definitely been a look at what features from other parks could inspire the design, but also it is very home-based and homegrown in what would work for Rochester,” Lyman-Torres said.

Friends of the Roc City Skatepark is continuing to raise funds to support the second and third phases of the project. President Jim Maddison, who started the group 12 years ago as a means of getting a skatepark for his now-teenage kids, said the organization has netted donations from both the Sands Family Foundation and the ESL Charitable Foundation.

“We’re still out getting donations to get every phase of this project done,” Maddison said.

After more than a decade working to get the ball rolling on the skatepark, Maddison is excited to see construction begin. The effort spanned the terms of four different mayors and at one point Maddison worried the project was dead on its feet.

“There’s honestly not a lot of institutional memory as the city changes people, so this was a matter of getting all of the right people on the same page,” Maddison said.

Since 2017, the Rundel Memorial Library’s northern terrace has been closed off to the public by a chain link fence. The reason: city crews have been working under Rundel and its terrace to firm up the 84 year old building’s aging foundation. 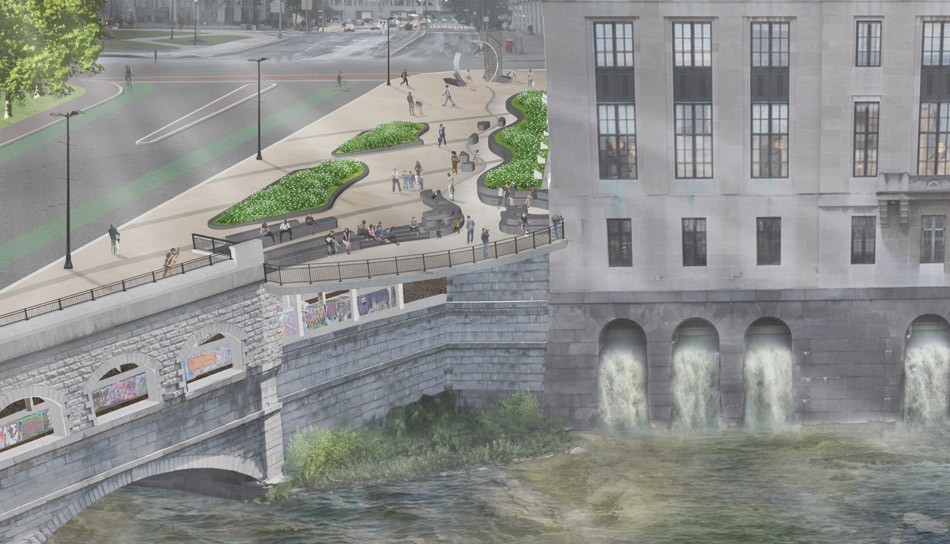 But that work is paving the way for something a little more visible. In March, the city is set to begin building a new terrace. City officials estimate that between design and construction the project will cost $9 million. They have some big plans for what’s going to be there.

For example, a $200,000 public art piece by Denver’s Chevo Studios will be placed at the site. Chevo has built interactive public art exhibits across the country, including the Grand Canyon, the Kansas City Zoo, and Phoenix’s Paseo Highlands Park.

“Opening up this terrace is an opportunity to not just allow, but encourage pedestrian traffic,” said City Council member Mitch Gruber, who chairs Council’s Parks and Public Works committee. “It’s an opportunity to create a new gathering place.”

As part of the project, the sidewalk between South Avenue and the Rundel building will also be restructured so that it and the terrace form a cohesive public space. This month, City Council will vote on issuing $770,000 in bonds for the sidewalk work.

The terrace and sidewalk projects are receiving $1.5 million from the $50 million in state ROC the Riverway funding.

The existing terrace stands over the hollow chasm of the abandoned Rochester subway and needs to be torn down before a new terrace can be built, said assistant city engineer Kamal Crues.

“The north terrace was in a state of disrepair,” Crues said. “The most cost-effective way to handle this was to do a demolition of the northern section of the terrace and reconstruct it new.”

The foundation needed to be firmed up before a new public space could be built, Crues said. Workers essentially built around the Rundel building’s existing foundation.

The city has worked closely with the Preservation Board on the project, since the terrace foundation rests on the old Erie Canal bed, which was built in the early 1800’s and later repurposed for the Rochester subway.

“There were definitely some design challenges,” Crues said. “We tried as much as possible to limit the disturbance to the actual bed of the Erie Canal.”

During the initial phases of the ROC the Riverway initiative, the city floated an even larger — and controversial — project near the Rundel Library. City officials have proposed popping the top off the Broad Street bridge, exposing the aqueduct underneath and turning the whole thing into a pedestrian walkway.

The preliminary design process for that proposal could take up to two years; $4.5 million of ROC the Riverway funding has been designated for that work.

Crues said the project could be transformative, but the design process will determine just how feasible it is.

“There are a lot of positives that will come from the removing of the top layer,” Crues said. “However, as we dive into the actual design of the project, that’s when we will be able to truly investigate every aspect of how that project would need to take place.”

Rochester is looking to give the southern terrace of the convention center a $10 million facelift. 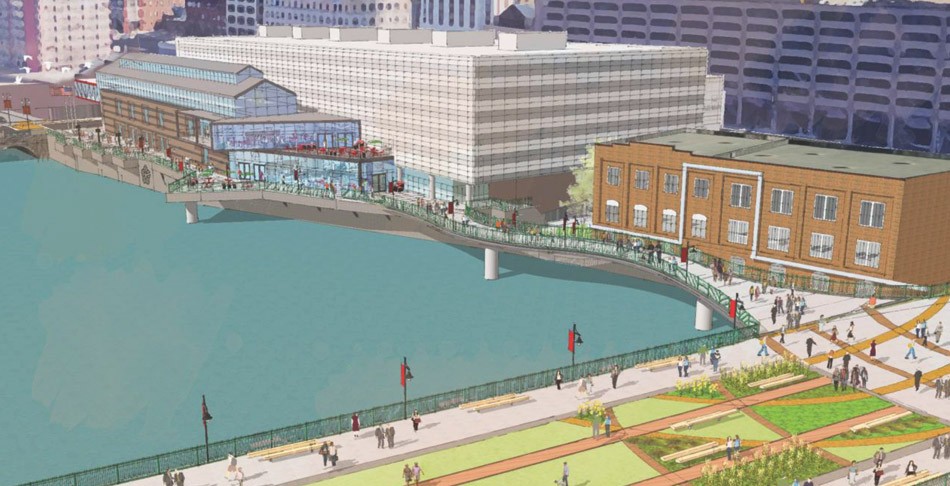 The city is seeking architectural design proposals to transform the southwest portion of the Joseph A. Floreano Rochester Riverside Convention Center by expanding the terrace to increase access to the riverfront and repair the building’s river wall foundation. It issued the request for proposals last week.

A structural survey of the stone and brick wall in 2017 found several issues, including large cracks and other deterioration. The wall and convention center were built in 1982.

The overhaul is slated for a spring 2022 groundbreaking. Governor Andrew Cuomo committed $5 million to renovate the convention center in 2018.

City spokesperson Justin Roj said the $10 million price tag would be split evenly between the city and the state.

It is not the first undertaking to enhance the convention center to what the city describes as a more “modern” and “dynamic” space. Last fall, the city completed the construction of the north terrace at the building. Also part of ROC the Riverway, that project renovated a publicly accessible connection between East Main Street and the building’s western river wall.

The new project will continue that construction and expand the terrace into a larger public space with an eye toward connecting it with the Genesee Riverway Trail, which runs through other ROC the Riverway projects, such as the coming Roc City Skatepark off South Avenue.