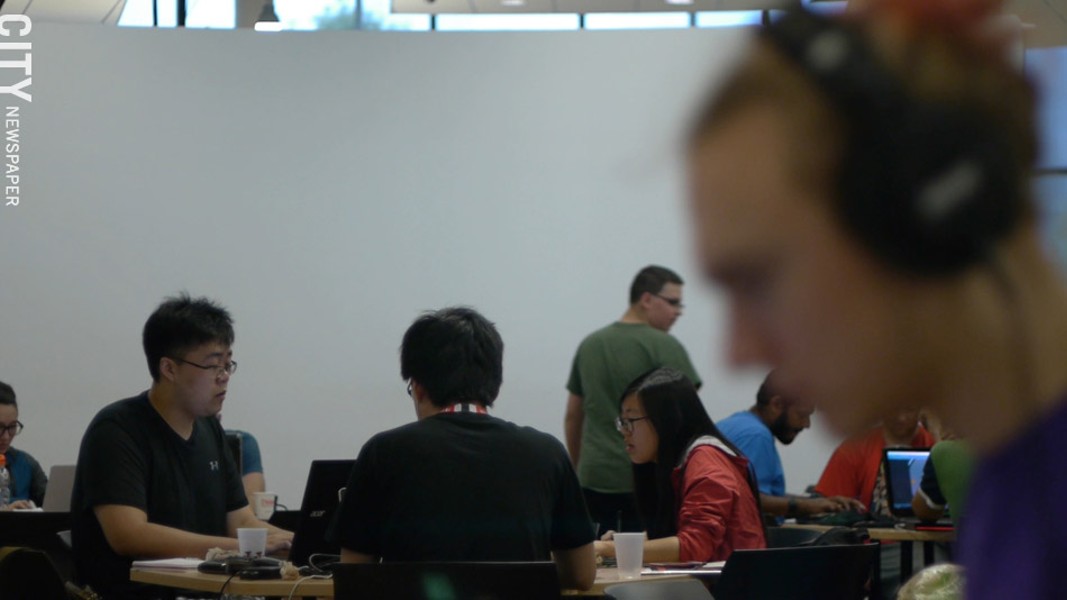 PHOTO BY KURT INDOVINA ROC Game Devs participating at a recent game jam, working on new games that will be showcased at the Rochester Game Festival on September 30.

There are maybe 30 of them – some in their late teens, a few possibly late 40's – clacking away on their keyboards, drawing on tablets, and talking among themselves. Some are wearing headphones and are working in their own world. Others huddle together over a single screen, watching intently as one fiddles his thumbs on an Xbox 360 controller.

This is a game jam, where game developers of all skill levels, including novices, make a game in just a few days. On this day, the games have a Rochester-culture theme. One has players delivering garbage plates to various locations around the city. Another has players assume the role of street artists covering the abandoned subway station walls with graffiti. Together, this group of people are the ROC Game Dev Community, a collective of more than 30 local artists, programmers, animators, and designers – students, employed game developers, hobbyists.

The ROC Game Dev community aims to change that story and keep the development here.

Its participants meet together once a month at RIT's MAGIC Center to share their games, what they're working on, and what they've learned. Sometimes the space is treated as a co-work space, where developers take their laptops, sketchbooks, and drawing tablets to work on their own game while still being in the company of other devs. They also get the opportunity to present workshops and lectures ranging from game design to how to use Twitter to promote your game. All of it's free and open to the public.

Rob Mostyn, co-founder of the ROC Game Dev community, started developing his own game, "A Small Robot Story," nearly two years ago. His degrees were in psychology and graphic design, but he caught the development bug after doing the soundtrack for a game by local artist and indie dev, Pete Lazarski.

Lazarski's game, "Halloween Forever," about a jack o'lantern that defeats evil creatures by vomiting candy corn at them, is stylized but it's visually simplistic, and Mostyn, who is also an artist, was inspired to try developing his own game.

Other than Lazarski, though, Mostyn didn't know anyone in Rochester who was developing video games, so he started reaching out on online forums such as Reddit and Facebook to find other local aspiring game devs.

"The first 'unofficial' ROC Game Dev meetup was just me and Peter Lazarski grabbing coffee and talking game development back in the summer of 2015," Mostyn says. "After two to three hours of chatting, we agreed that a monthly meetup would be cool."

Eventually a few more people began joining them. They would talk about game development, play one another's prototypes, and exchange feedback. As the group began to expand to close to 10 people, they shifted to meeting up at the Irondequoit public library. At the time, participants were still mostly game development hobbyists.

Mostyn and Lazarski decided to exhibit their games at the Rochester Mini Maker Faire (a showcase for artists and creators to share their work with the public), where they met Wes Rockholz, who at the time was a student in RIT's game design and development program.

Rockholz had been seeking an outlet to collaborate and share games outside of a school environment, and he joined the ROC Game Dev meetups.

"When I was at RIT as a student, before I was an indie, all I wanted do was to be in a group of people who made games," Rockholz says. Most of his fellow students had no interest in making their own games outside of class, though. The ROC Game Dev group was the outlet he was searching for.

Rockholz was the first RIT student to join the ROC Game Dev meetups, but that led to an increased number of students showing up. As attendance rose, the ROC Game Dev group needed more space, closer to RIT students. So Rockholz put Mostyn in contact with the MAGIC Center.

"We found that we shared common goals, and they offered use of their space," Mostyn says. Soon 12 to 25 people were consistently attending the meetings. More RIT students were participating too, and not all of them were pursuing a degree in game design.

Tiffany McFarlane, for instance, was earning her degree in film and animation but wanted to learn about game development. She had joined RIT's Game Design & Development Facebook Group, and there, she says, "I saw mentions of the group, and I started showing up for meetings."

When the ROC Game Devs aren't all physically present at the MAGIC Center, they're in constant communication via Discord, a chatting app geared specifically toward gaming. Through it, they continue to discuss ideas, talk about what they're playing, ask for advice, or are just engage in conversation.

The game dev community is just a part of a fledgling industry that includes RIT, the Strong International Museum of Play, and local professional game development companies. As the industry grows and a community expands, the potential benefits for Rochester and all of Upstate New York grow as well. The game industry and the community that surrounds it could be what the city needs to partially counteract its brain drain.

"RIT is a massive powerhouse that produces some of the best students in the US and internationally, especially for game design and development," Tiffany MacFarlane says. "So having an immediate area where those students can work, fulfill their co-ops, and ultimately stay will help revitalize Rochester. We have the potential to create a powerful and long-lasting industry here through video games."

McFarlane currently works for Second Avenue Learning, an established game development studio that recently relocated downtown in Tower 280 and employs several RIT alumni. Another growing Rochester studio is Workinman, which is mostly focused on creating licensed games for Nickelodeon, Fisher Price, and others but has slowly shifted toward creating original games such as "Deathstate" (currently available on Playstation 4 and PC).

Through ROC Game Dev's affiliation with MAGIC Center, Mostyn acquired the position of RIT's digital gaming hub coordinator, focused on building the community of game developers in Rochester and supporting and contributing to the economic development of the digital game industry.

Mostyn is currently organizing the Made in Rochester Game Festival, a showcase of video games and tabletop games developed in the Rochester area. That event takes place on September 30 at the Irondequoit Public Library, and it's free and open to the public. More information on the festival is available at rocgamefest.com.

And more information on the game dev meetups is available at rocgamedev.com.