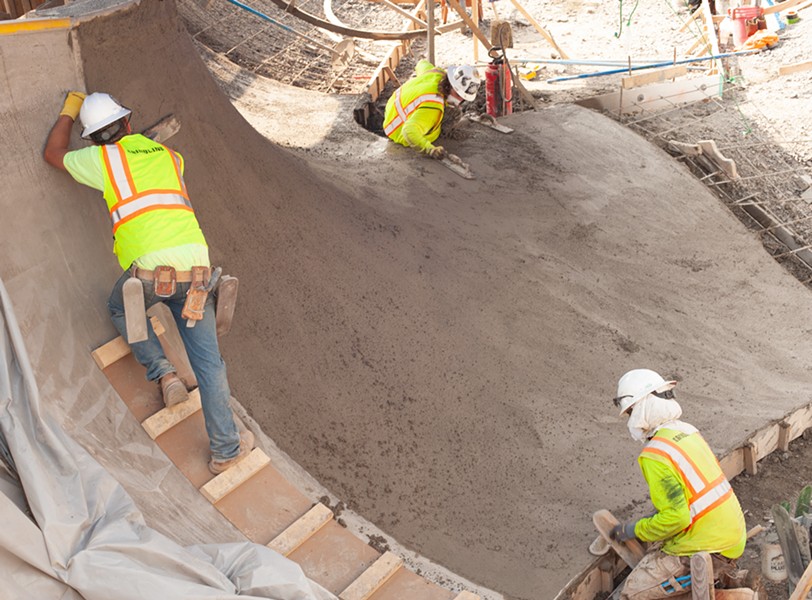 PHOTO BY JEREMY MOULE Workers smooth concrete inside the bowl of the Roc City Skatepark, which officials expect to open in October.
The central feature of the coming Roc City Skatepark will soon take its rock-hard form.

Masons under city contract on Friday began pouring concrete for the park’s bowl and smoothly contouring the surfaces by hand. Some concrete elements had already been installed on other areas of the developing skatepark. Webs of iron rebar formed the skeleton for some of the park’s walls and ramps.

“We’re going to be skating in here, in this bowl, in this park in October,” said Norman Jones, the city’s commissioner of environmental services. 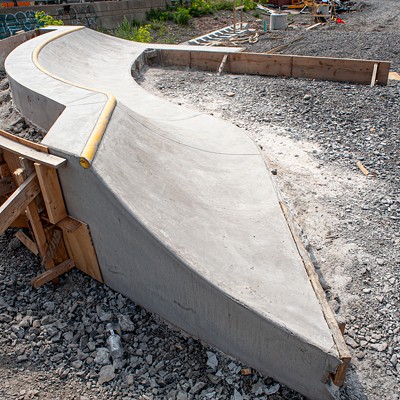 Roc City Skatepark update
By Jeremy Moule
Click to View 4 slides
The park, which is along South Avenue tucked under snaking overpasses, was designed by Stantec, which worked alongside California-based skatepark designer Kanten Russell. Grindline, a company that has constructed skateparks from Houston to Copenhagen, is building Roc City Skatepark.

In addition to the bowl, the park will feature stairs, rails, and a quarter-pipe ramp.

Jones noted that the park has been 20 years in the making and had been pushed forward by private partners like the Friends of the Roc City Skatepark and government partners as well. The park will bring vibrant use to a formerly underutilized waterfront site, Jones said.

The city has budgeted $1.8 million for the first phase of the skatepark’s construction. It plans to expand the park in two additional stages.